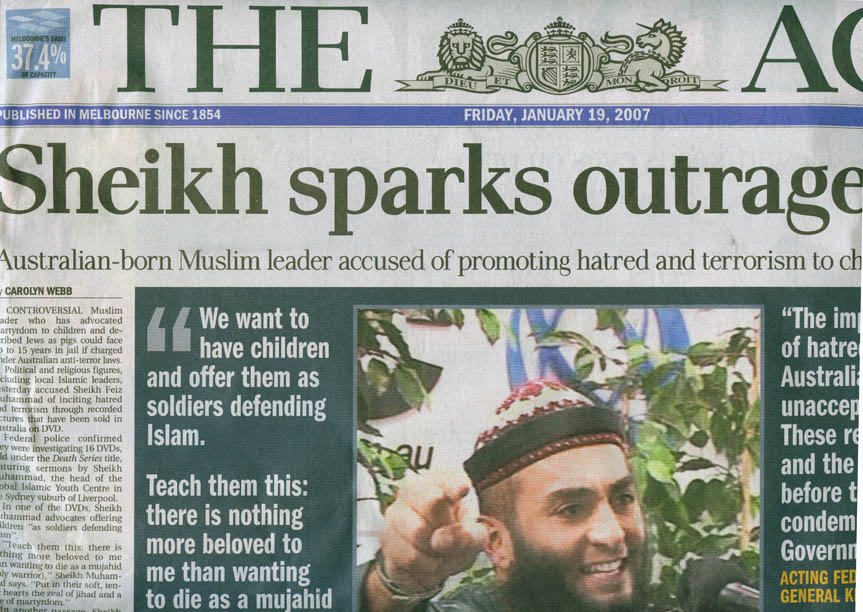 The Age is concerned about Muslim fundamentalism

This is scanned from the front page of today's Age Newspaper

The Age is Victoria's traditional liberal / democrat / intellectual / left leaning daily. The scan above is the best we can do with our primitive technology. The only outrage the Age usually reports is the outrage of the Muslim communities to something non-Muslims are doing. Today they have reversed the spotlight-on-outrage from the Islamic community to the mainstream Australian community. The Age website is http://www.theage.com.au/

Also, congrats to Acting Attorney General Kevin Andrews Kevin.Andrews.MP@aph.gov.au who has acted in a timely manner.

The B’nai B’rith Anti-Defamation Commission (ADC) has growing concern about the rising level of antisemitism in the Muslim community.

Sydney’s Sheikh Feiz Mohammed’s recent racist antisemitic diatribe, referring to Jews as pigs, has simply been a continuing frightening trend among sections of the Muslim community.

Another local Muslim leader and Mufti of Australia Sheikh Taj el-Din al-Hilaly has also been an unabashed antisemite.

Similarly, Muslim organisations in Australia such as Hizb ut-Tahrir and Mission Islam have also been promoters of antisemitism.

In a joint statement, ADC Chairman Michael Lipshutz and ADC Executive Officer Manny Waks commented: “It is about time the Muslim community acknowledges this frightening racist trend and takes appropriate and urgent action in dealing with this. Sheikh al-Hilaly’s blatant antisemitic comments as long ago as in 1988 should already then have sent a strong warning sign to the Muslim community to purge this antisemite from their midst. The Mufti’s ongoing comments and recent Holocaust denial should similarly have reinforced the need to take decisive action against him.”

The ADC acknowledges that some in the Muslim community have indeed taken an uncompromising stand against the Sheikhs and their cohorts but to a large extent words have not been followed by any real action.

Mr Lipshutz and Mr Waks added “the Muslim community as a whole now has another opportunity to publicly distance themselves from antisemitic individuals and organisations. These latest antisemitic comments by Sheikh Feiz should rally the Muslim community to combat this intolerable, vile epidemic among its members. In a society which prides itself as multi-cultural it is disturbing that the ugly head of antisemitism is being raised by influential leaders of the Muslim Community. This does not augur well for either cultural diversity or respect for Australian values”.

The B'nai B'rith Anti-Defamation Commission (ADC) is the human rights arm of B'nai B'rith Australia/New Zealand and is dedicated to combating antisemitism and all forms of racism.

THAT a member of the Global Islamic Youth Centre could describe Sheikh Feiz Muhammad as a "great bloke" speaks volumes about that organisation and radical Islamists in this country. Australians consider someone who is friendly, easygoing and tolerant to be a great bloke. A youth leader who inculcates "a love of martyrdom" in children, advocates jihad and describes non-Muslims as filth and Jews as pigs hardly falls into that category.

The rhetoric of hate has heated up in recent times. Unless nipped in the bud, related actions will inevitably follow. The great challenge for Muslim Australians, their leaders in particular, is to demonstrate in word and deed that the "misunderstood" proponents of terror increasingly hitting the headlines are as unacceptable to their community as they are to the rest of us.

And...in The Independent, Martin Amis had this to say...

What is the most depressing thing about Britain you have observed since your return?

The most depressing thing was the sight of middle-class white demonstrators, last August, waddling around under placards saying, We Are All Hizbollah Now. Well, make the most of being Hizbollah while you can. As its leader, Hasan Nasrallah, famously advised the West: "We don't want anything from you. We just want to eliminate you." Similarly, when I went on Question Time the other week, a woman in the audience, her voice quavering with self-righteousness, presented the following argument: since it was America that supported Osama bin Laden when he was fighting the Russians, the US armed forces, in response to September 11, "should be dropping bombs on themselves!" And the audience applauded. It is quite an achievement. People of liberal sympathies, stupefied by relativism, have become the apologists for a creedal wave that is racist, misogynist, homophobic, imperialist, and genocidal. To put it another way, they are up the arse of those that want them dead.