An Arab-American defends the real-life Bauers.

I am an Arab-American as well as a fan of "24." The two things are not mutually exclusive, despite what the Council on American Islamic Relations (CAIR) and other such groups have to say about this season's opening episodes possibly increasing anti-Muslim and anti-Arab prejudice in American society.

Most of the terrorists represented in "24" through the years have been Arab Muslims. Why? Well, probably because most terrorists today are, in fact, Arab Muslims. As a descendant of Syrian Muslims, I am very well aware that the majority of Muslims world-wide are peaceful, hard working, and law abiding. That still does not change the fact that the greatest terrorist threat to the U.S. today comes not from the ETA, the IRA, etc., but from one group: Islamic terrorists.

And this is what makes "24" a compelling drama every week. Instead of pretending Islamic terrorists don't exist, the show presents frighteningly real worst-case scenarios perpetrated by Osama bin Laden's followers. So CAIR thinks it's over the top for the terrorists in "24" to blow up Los Angeles with a nuke? Please, if bin Laden and his crew had nukes, most of us would be way too dead to argue over such points.

There is a dangerous trend in the U.S. today that involves skirting the truth at the risk of offending any individual or group. When Bill Cosby talks to African-Americans about self-respect and responsibility, and says publicly what many have been saying privately for years, he's branded a "reactionary," "misinformed," "judgmental," and so on. When "24" confronts America's worst fears about al Qaeda--whose goal remains to kill as many Americans as possible whenever possible--the show is said to be guilty of fueling anti-Muslim and anti-Arab prejudice.

Well, here's the hard, cold truth: When Islamic terrorists stop being a threat to America's survival, viewers will lose interest in "24," because it will have lost its relevancy. Until such time, I will continue to watch "24"--because, believe it or not, the idea that there are Jack Bauers out there in real life risking their lives to save ours does mean something to me. 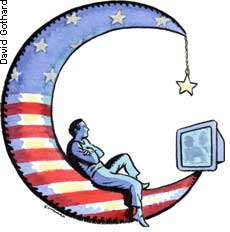 And as for "24" causing a possible backlash against Muslims and Arab-Americans, where's the evidence of that? The show is now in its sixth season and there hasn't been one recorded incident of any viewer ever slurring or attacking any Muslim or Arab-American because of something that happened on the show. More to the point, in the latest episode President Palmer stated, "The American Muslim community is the greatest line of defense against these terrorists." He advocates strengthening ties with Islamic leaders across the U.S., and is opposed to measures that would in any way infringe upon the constitutional rights of Arab Americans.

That said, I would certainly welcome more characters in movies, TV programs and novels who reflect the overall Arab-American experience. Truth is, most of us don't have bomb-making skills or a desire to become human missiles. And there are Muslim and Arab-American CTU heroes out there, as well as doctors, superdads, women scientists, etc. But just as it took Saul Bellow to give literary voice to the Jewish-American experience, we need our own storytellers to weave the pastiche of tales that make up Arab-American life.

In the meantime, the next time a journalist decides to report on Arab-American concerns about shows like "24," maybe he could actually talk to someone other than CAIR and the Muslim Public Affairs Council, and seek out Arab-Americans with a different point of view. We actually do exist.

And maybe that same reporter could take a closer look at CAIR. Ask CAIR about the Holy Land Foundation and its support of Hamas. Ask it about the 1993 World Trade Center bombing and the CAIR board member who was named as an unindicted co-conspirator in that case--yet still sits on CAIR's board. Look a little closer, and maybe you'll find that CAIR has good reason to get nervous about shows like "24."

Because terrorists and their supporters continue to hide among us in plain sight, we need Jack Bauer, now more than ever.

Mr. Dabul is a free-lance writer and the author of "Deadline," a novel about modern terrorism.

This is an outstanding article. It should be required reading for all Americans, Brits, Aussies, Israelis, etc. Thank You, Mister Dabil!

I guess if it was 20 religious Jews that flew Airplanes into tall buildings, kindapped Journo's and be headed them on TV, Blew up red Cross and Un workers, Blew up religious places of worshipp, if it were religious Jews in the suburbs that were plotting to murder their fellow citizens and inciting hatred towards other religions, controlling the UN by their numbers and had all the left wing Academics, trade unions, media, NGOâ€™s on their side the best programme on TV at the moment "24"' would be portraying the bad guys as religious Jews... Such is life!

It is easy to accept that Mr Dabul is a reasonable, law abiding, humane person and that there are many Muslims like him. The problem is that so few like him speak up against the ones he identifies as supporters and apologists for terror. Until there are as many Muslims who speak out against terrorist Muslim supremicists, as those who support CAIR or bin Laden, Muslims as a group will rightly be suspected of terror. The whole world, Muslims included, has much to fear until Islam renounces jihad and embraces the 21st century.

Thank you Mr Dabul for this most interesting article. Your honesty is most refreshing and appreciated. It will go a long way towards bringing all peoples who cherish peace and Democracy together.

Mark Steyn has also been critical of Hollywood's PC refusal to acknowledge, even for a second, that Muslim terrorists are a believable storyline. http://www.jewishworldreview.com/1105/steyn112805.php3 "The Sean Penn thriller, ''The Interpreter,'' was originally about Muslim terrorists blowing up a bus in New York. So, naturally, Hollywood called rewrite. And instead the bus got blown up by African terrorists from the little-known republic of Matobo." Of course. I mean who ever heard of Muslims blowing up a bus?

Fantastic article. CAIR is a front for Islamic terrorism - it funds terrorism and should be dismantled. Dabul is to be commended for his courage in telling the truth...which can be an extremely dangerous activity for moderate Muslims nowadays.

Dear Mr Dabul, I don't watch the series 24, but here in Australia the Muslim Lobby kneejerk reacts to ANY negative representation of Islam or Muslims by claiming that it is racist. They effectively attempt to muzzle all criticism. I'm not really surprised to learn that the same occurs in the US. Thank you for writing about this issue.