Published Monday May 28, 2007
from The Other Cheek Blog (Andrew Landeryou)
republished Wednesday May 30, 2007 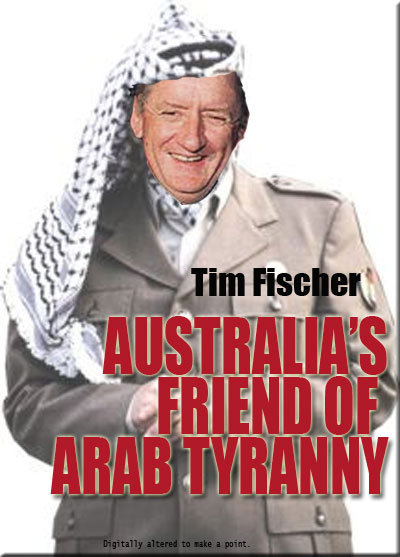 As news comes to hand of a train-obsessed weirdo's arrest, the contemptible former Deputy Prime Minister and Israel hater Tim Fischer has teamed up with the Anti-Semite Age newspaper in peddling an outrageous smear against Israel, falsely claiming it deliberately attacked a US ship, the USS Liberty during the Six Day War in 1967.

That'd be because he's been busted for trotting out these Israel bashing lies before as part of a shameless effort to please his pay-masters in the Arab world where he has attracted a number of lucrative "consultancies".

Patriot Ted Lapkin of AIJAC's response at that time should have put a sock in the bigot's mouth:

Friendly fire incidents are an almost inevitable facet of war. But Tim Fischer declares that the Israeli attack on the USS Liberty during the 1967 war was premeditated and deliberate "Israeli attack that faded into obscurity" Letters July 14.

But two years ago, the US National Security Agency released transcripts of Israeli Air Force radio communications intercepts that conclusively proved the incident to be a tragic case of misidentification.

During the course of the attack, two Israeli helicopters were vectored to the scene with orders to pick up survivors. But unbeknown to the Israelis, an American spy plane was monitoring the frequency being used for communication between the choppers and air traffic control.

Transcripts of the Israeli radio traffic clearly demonstrate that the Israelis were convinced that the Liberty was an Egyptian navy supply vessel.

"Pay attention," the controller said. "The ship is now identified as Egyptian."

But upon approaching the Liberty, one of the helicopter pilots identified an American flag flying over the stricken ship. The transcripts indicate that this news caused consternation at Israeli Air Force headquarters. The air traffic controller ordered the choppers to "clarify by the first man you pick up what nationality he is and report to me immediately."

These tapes of Israeli radio traffic, as well as English translated transcripts, are available on the NSA's website. And they are confirmed by Marvin Nowicki, a US Navy Arabic/Hebrew linguist who was on the American spy plane that day.

In a letter to the Wall Street Journal (May 16 2001) Nowicki wrote that the Israeli attack on the Liberty was a "gross error."

This evidence reaffirms the original conclusion of the 1967 US Navy court of inquiry that the attack on the USS Liberty was an unfortunate case of wartime friendly fire. This material is both conclusive and easily accessed.

By resurrecting this long discredited calumny, the only thing Fischer proves is own deep-seated bias against Israel.

Despite these contemptible views, Tim Fischer is the beneficiary of many sweetheart government appointments, including Chairmanship of Tourism Australia. In 2005, he laughably was awarded Australia's highest civilian honour, the Companion of the Order of Australia which is meant to be given to people of great achievement and good reputation.

Among his other exploits:

â—  A complicated personal life that we really should get into one of these days;

â—  On the record claims that Mossad stole Malcolm Fraser's trousers in Memphis to embarrass him;

â—  Inviting Yasser Arafat to visit Australia in an official capacity, leading PM Howard to withdraw the invitation in an embarrassing debacle; and

â—  Giving away half a billion dollars of Australian taxpayers' money to Saddam Hussein's regime.

Tim Fischer ought not be favoured recipient of Commonwealth Government largesse and awards, which only give credibility to his disgraceful and discredited views and assist him in collecting lucrative paid consultancies from Arab dictatorships. John Howard's support for democracy in the Middle East cannot be questioned but his ongoing support for Tim Fischer will make even the PM's most loyal supporters wonder.

It's interesting how sell-outs like Tim Fischer help facilitate the demise of their own civilization. Re-hashing old disproved stories, purely to please the Arabs. shows the ugly inside of this ugly man.

It wasn't so long ago that The Age was a great paper. Now it's just another antisemitic rag.I remember at the terrible time of the disengagement an Age editorial calling settlers rabid ,vilifying hundreds of thousands of our best. Why spend time and money on vicious crap? Especially when we have the mitzvah of hakoros hatov recognising good done for us and expressing gratitude.The Australian and Andrew Bolt's Herald-Sun warrant support.

I have debated the USS Liberty incident with Liberty sailors extensively in the past in detail. In cases like this, the truth can be complicated. The bottom line is: the Liberty was a spy ship under the command of the NSA at the time, and not the Navy, because the U.S. was spying on Israel for the benefit of Egypt and so claimed no knowledge of having any ships in the vicinity. This is why air support for the Liberty from the Sixth fleet was recalled TWICE on direct orders from the Secretary of Defense; one cannot protect a ship that one denies all knowledge of. Israel had no intentions of hurting any U.S. personnel. President Johnson never had to account for his double-dealing with Israel and Congress has never recognized the special service of the sailors on this secret mission. The suggestion that Israel might have had malicious intent is simply absurd, considering that in 1967 Israel was fighting a war very much of survival, from it's old and hardly defensible borders, facing the combined armies of several Arab states, all screaming that they would "push the Jews into the sea". Why would Israel go and deliberately attack the forces of it's major supporter? Fischer insults himself by making these arguments.

This is the Age corrections policy:- "It is the policy of The Age to correct all significant errors as soon as possible. The Age is committed to presenting information fairly and accurately." My money is on next week's Sunday Age ignoring Fischer's lies and then compounding them with more Israel bashing.

Fischer's broadsided rant in the Age (or the Ramallah Rag/ Bir Zeit Bugle) as it should be known) should never have gotten past a sub-editor's desk to the letters page let alone a half page in the opinion pages. About time the paper was brought to account but you will never see a published rebuttal of Fischer's nonsense in a Fairfax paper.