by Itamar Marcus and Barbara Crook

As preparations for the American peace conference continue, the leaders of the Palestinian Authority have announced their demands for a future Palestinian state with an area of 6205 square kilometers. This would include the Gaza strip, the West Bank and East Jerusalem. However, the message they have conveyed to their people for years, and continue to convey on the eve of the conference, is that "Palestine" exists and it replaces all of Israel.

A clip broadcast by Fatah-controlled Palestinian television this week shows a map in which Israel is painted in the colors of the Palestinian flag, symbolizing Israel turned into a Palestinian state. 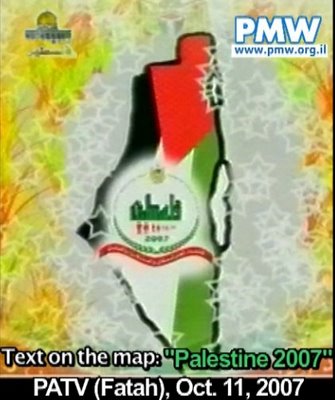 The description of all the state of Israel as "Palestine" is not coincidental and is part of a formal educational approach throughout the Palestinian Authority. This uniform message of a world without Israel is repeated in school books, children's programs, crossword puzzles, video clips, formal symbols, school and street names, etc. The picture painted for the Palestinian population, both verbally and visually, is of a world without Israel.

Even as the Bush Administration and Prime Minister Olmert explore a point of concession to establish another Arab nation which will be called Palestine, the official television network of the Palestinian Authority (i.e. operated by Fatah terrorists) shows a map on their network on October 11, 2007 of Israel as the sovereign nation of Palestine. What is the concession? Actually the concession is numerous and dangerous for Israel’s existence: the giving up of what Israelis call portions of Judea and Samaria and the West calls the West Bank. The heinous concession on the table for discussion is dividing Jerusalem between Israel and the emerging repugnant State of Palestine. How is this coming about? The Bush Administration is twisting the Israeli government arm to establish a “Palestine” on Arab terms and Olmert is acquiescing to the arm twist at Jewish expense. Palestine Authority (PA) President (also Palestine Liberation Organization (PLO) Chairman) Mahmoud Abbas controls the content station PATV. Somebody explain to me how that makes Abbas a trustworthy partner in negotiation to keep any bargains he submits? It is extremely apparent that Abbas is following in Yasser Arafat’s footsteps of telling the West and Israel anything they want to hear and telling the Arabs called Palestinians that the destruction of Jewish Israel is imminent. I submit that the creation of a Palestinian State will lead to a blood bath of either Jews or Mohammedan Arabs. How can I say this? I can say so because once the Arabs of the Palestinian Authority under the direction of the umbrella terrorist network known as the PLO becomes a sovereign Palestine, that horrific nation of State thuggery will have the tools to negotiate with rogue nations and arms dealing nations (Russia and China) for a military designed to invade the rest of Israel. Someone will win and it won’t be pretty. Not only that, due to the current investment of America in the Middle East due to the War on Terror, America will participate in that Israeli/Palestinian war. And if America participates then certainly Iran will follow the Palestinians with Russia joining closely on Iran's heals. I say Russia because the Old Bear has warned off Western nations from attacking Iran’s nuclear facilities. If Iran and Syria partner to support a Palestine, America will attack Iran’s military capabilities – including the nuclear facilities. Russia will have to do something or face international disgrace (again) in talking big but not yielding clout. A sovereign Palestinian State will lead to this scenario. It would be better for the Arab nations surrounding Israel to admit their mistake in creating a group of Arab refugees and matriculate those Arabs into their nations. The biggest candidate for the matriculation is Jordan since its existence was intended for the Arabs while a sliver of land was to be reserved for Israel. This was a League of Nations Mandate given to the British then a United Nations Mandate before third world dictators and Arab nationalists backed by oil infected the World Body with corruption. Just as the British shafted the Jewish people just after WWI to appease the aid that was given by Arabs to defeat the Ottoman Turks, there is the appearance the American government is preparing a raw deal for Israel for global considerations of oil and the need for Middle Eastern allies in the War on Terror. Thus once again Israel is being placed in a position to negotiate away their land acquired by victory during numerous attacks by Arabs to exterminate Israel and Jews. This includes the holiest site to all Judaism and the most significant site to Christendom – Jerusalem. From my SlantRight.com Blog on this very issue: http://www.slantright.com/index.php?name=News&file=article&sid=797

If you look for Frank Luntz material...he explains effective language and techniques for countering the Islamist propaganda very well.

Can you find somewhere, a thorough scholarly study of the range of propaganda techniques effectively used by Palestinians, Arabs, Militant Moslems whatever. How could they have won over the Left and the gullible media?

Harry you are spot on ,the only way Israel can survive is to continue to have military superiority without that they are doomed!

The Western mindset has no ability to comprehend the lies from the Arab world, where institutionalised deceit on behalf on Islam is the norm. What amazes me sometimes is that even those aware of it pretend it is not the case -- for the sake of diplomacy -- making the whole 'peace process' exercise a waste of time. One can only wish for savvy and gutsy leaders in Israel and the US to expose the lies, but I don't think the current crop are inclined to do so.

This has been the position of the P.A. for years, why should we be surprised. It is an Islamic agenda to dominate the world, if possible, and Israel is well and truely in its sights. What happens to Israel so goes the rest of the "infidels". The brain washing goes on as directed and according to the Islamic texts. What great and holy books they are; NOT. We must realise that much of the World views Israel as a problem, having "nothing" of value that it needs and as such the Israeli nation is dispensable. The intellect of the people can be utilised without the country. In short very few of "those in power" give a rats about Israel, including its own leaders it seems. If not for YHWH Israel would have been long gone. Thankfully history will repeat itself re-Israel and YHWH will continue to prevent the total destruction of Israel and the Israeli peoples.