Some history and background on the Gaza Strip.

On Wednesday, tens of thousands of Palestinians streamed into Egypt for a shopping frenzy after gunmen in the Gaza Strip destroyed part of the barrier along the border. In the past two weeks, following a rise in rocket attacks, Israel had ramped up its blockades, refusing to allow anything besides humanitarian supplies to pass into the region. Below, the Explainer tackles a few basic questions about the region. 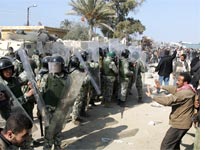 What exactly is the Gaza Strip?

The Gaza Strip is a roughly rectangular territory surrounding the city of Gaza, wedged between the Mediterranean Sea and Israel. To the southwest, it shares a seven-mile border with Egypt. The region has a long history of occupation—by the ancient Egyptians, the Philistines, the Arabs, the Christian Crusaders, and the Ottomans. After World War I, the Gaza area became part of the British Mandate of Palestine, and it was occupied by Egypt in 1948, in the aftermath of the first Arab-Israeli war. Israel took control of the region during the Six-Day War in 1967, along with the West Bank, eastern Jerusalem, the Golan Heights, and the Sinai Peninsula.

In 1994, Israel withdrew from parts of the Gaza Strip as part of its obligations under the Oslo Accords (which also affirmed the rights of the Palestinians to self-government). The Palestinian National Authority and Israel shared power in the Gaza Strip for the next 10 years, with the PNA administering civilian control and the Israelis overseeing military affairs as well as the borders, airspace, and remaining Israeli settlements.

In 2005, Israeli Prime Minister Ariel Sharon unilaterally ended military rule in the region and withdrew all Israeli settlements, making the Gaza Strip the first territory to come completely under Palestinian administration.* In 2007, Hamas seized control of the Gaza Strip, causing a division between the region and the other Palestinian territory, the West Bank, where the Fatah party is dominant.

How did it come to be that shape? 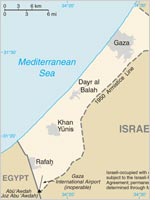 The rectangular Gaza Strip is about 25 miles long and three to seven miles wide. One long side lies along the Mediterranean. One short, straight end borders Egypt: This follows the border that existed between Egypt and the British Mandate of Palestine. The other sides of the rectangle—a long, ragged edge and a shorter, northeastern side—separate the Gaza Strip from Israel. This border was established after the first Arab-Israeli War, which also resulted in the creation of Israel. The Gaza region became Egypt's military headquarters during the 1948 conflict, and the narrow coastal strip saw heavy fighting. When the cease-fire was announced later that year—following a decisive Israeli victory—the final position of the military fronts became what's known as "the Green Line," or the border between the Palestinian territories (both the Gaza Strip and the West Bank) and Israel.

Who lives on the Gaza Strip?

Since the withdrawal of Israeli settlements, the Gazan population is almost entirely Palestinian Arab. More than 99 percent are Sunni Muslims, with a very small number of Christians. The region saw a huge influx of Palestinian refugees after the creation of Israel in 1948—within 20 years, the population of Gaza had grown to six times its previous size. The Gaza Strip now has one of the highest population densities in the world: Almost 1.5 million people live within its 146 square miles. Eighty percent of Gazans live below the poverty line.

Who built the fence between Gaza and Egypt? Who controls the border?

In 1979, Israel and Egypt signed a peace treaty that returned the Sinai Peninsula, which borders the Gaza Strip, to Egyptian control. As part of that treaty, a 100-meter-wide strip of land known as the Philadelphi corridor was established as a buffer zone between Gaza and Egypt. Israel built a barrier there during the Palestinian uprisings of the early 2000s. It's made mostly of corrugated sheet metal, with stretches of concrete topped with barbed wire.

In 2005, when Israel pulled out of the Gaza Strip, Israel and Egypt reached a military agreement regarding the border, based on the principles of the 1979 peace treaty. The agreement specified that 750 Egyptian border guards would be deployed along the length of the border, and both Egypt and Israel pledged to work together to stem terrorism, arms smuggling, and other illegal cross-border activities.

From November 2005 until July 2007, the Rafah Crossing—the only entry-exit point along the Gaza-Egypt border—was jointly controlled by Egypt and the Palestinian Authority, with the European Union monitoring Palestinian compliance on the Gaza side. After the Hamas takeover in June 2007, the European Union pulled out of the region, and Egypt agreed with Israel to shut down the Rafah Crossing, effectively sealing off the Gaza Strip on all sides.

Got a question about today's news?

Explainer thanks Tamara Cofman Wittes of the Saban Center for Middle East Policy, David Makovsky of the Washington Institute for Near East Policy, and Shibley Telhami of the University of Maryland.

The people of Gaza need to undersand why they are under a blockade. It is because they have chosen Hamas and Hamas is shooting at Israel and smuggling weapons from Egypt. The people of Gaza smart must elect a government that want peace and not war after Israel have pulled out of Gaza. Hamas is the problem

Israel left the strip only to be bombarded with Kassam rockets. Gazans wanted autonomy and they got it. It shouldn't be up to Israel to be their life line. Israel should just disconnect itself fully from the strip. Allow Egypt to supply free electricity and water to the Palestinians. Arab countries have enough money of their own to help out the Palestinians. Palestinian suffering is their own doing not Israel. Israel needs strong leaders who will stand up and protect Israel. No more talks on peace or giving up more land. The Israel Arabs are treated better in Israel then all the other Arabs in the Middle East. I am tried of hearing about the Gaza strip. If the Palestinians ever get their own country it will be no different to how the Gaza strip is today.