Speech to The Rally for Peace 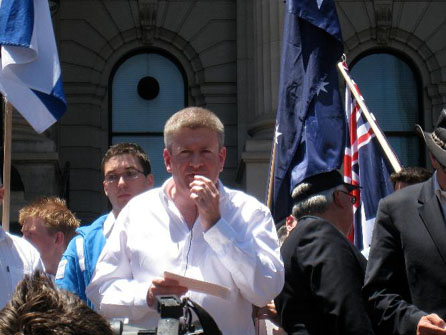 Firstly can I congratulate you all for coming out on a Sunday to stand up for your beliefs. I was talking to Malcolm Turnbull [Leader of Opposition] on the phone just before the rally and he asked me to convey to you all his very best wishes. 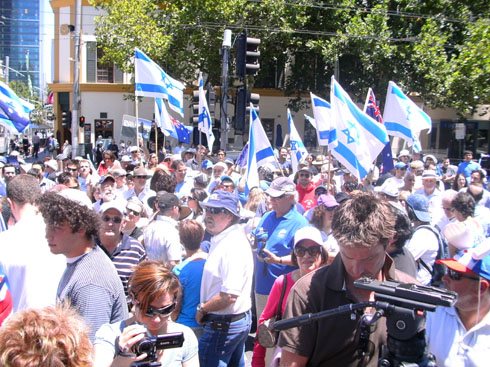 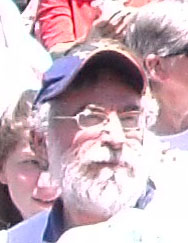 Today is a rally in support of Israel. But today is also a rally for her neighbours and the right of all to live in peace. Today we rally for democracy. We rally for freedom. We rally for the rule of law.   It is important that we remind the international community that Israel is being attacked from within the borders of a territory that it did not occupy. That Israel is being attacked from within a territory over which it makes no claim.

Hamas in Gaza cannot claim to have been resisting an occupier. Let us remember that Israel withdrew from Gaza in 2005. Despite this, Israel has come under attack on an almost daily basis from rockets fired by terrorists linked to Hamas. More than 3,000 rockets in 2008 alone.

Hamas care nothing for civilian populations on either side of the border. Hamas fire missiles randomly at population centres in Israel. Hamas intentionally puts the residents of Gaza in danger by hiding weapons in civilian areas.

But if you listen to some commentators you could be forgiven for thinking that Hamas was some sort of benevolent religious organisation – a kind of Salvation Army with weapons. The truth is that Hamas seeks neither peace nor prosperity for Gazans.

Some believe that Israel, as the stronger military entity, should just sit back and absorb the rockets, the casualties and the deaths. That somehow every nation except Israel has the right to defend itself in line with Article 51 of the UN Charter. What lies behind such a view is the belief that Israel doesn’t have a right to exist and deserves whatever it gets. The State of Israel has the right to defend herself. But more than that, the Government of Israel has an obligation to protect its citizens. To fail to do so would be a dereliction of its duty.

We should mourn all civilian deaths on both sides and hope and pray for a quick resolution to this crisis. The objective should be a sustained end to hostilities.

What should not be accepted, however, is a one way ceasefire that just leads to further attacks on Israel. The rockets must stop.

Israel’s right to exist in peace with its neighbours must be accepted.  Israel is a beacon of hope and liberty in the Middle East. It is a great and robust democracy. The people of Israel are free and always will be. And Australia will stand by them. 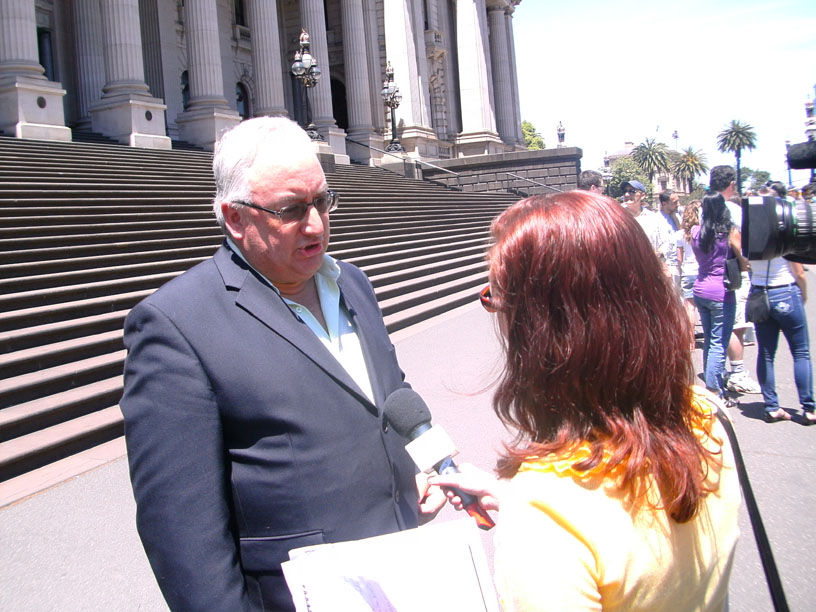 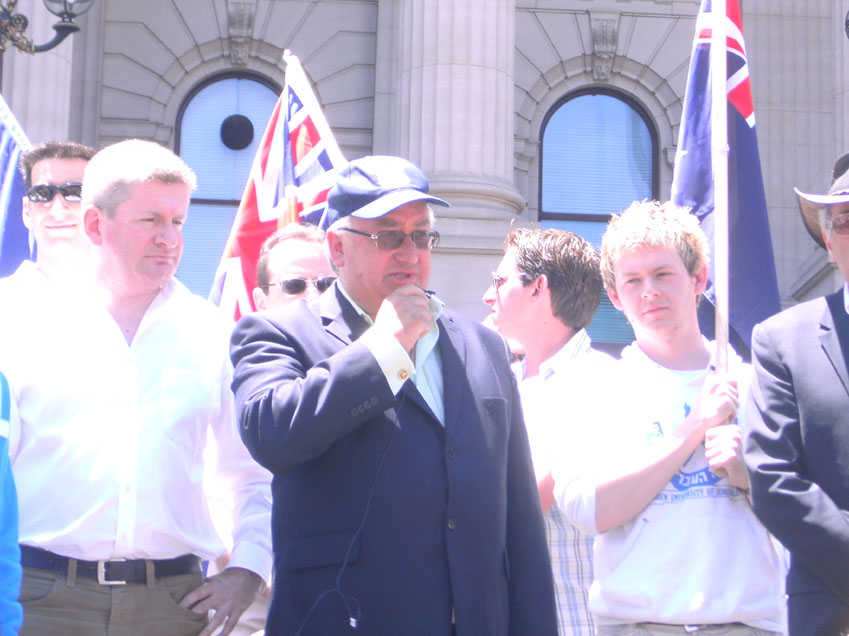 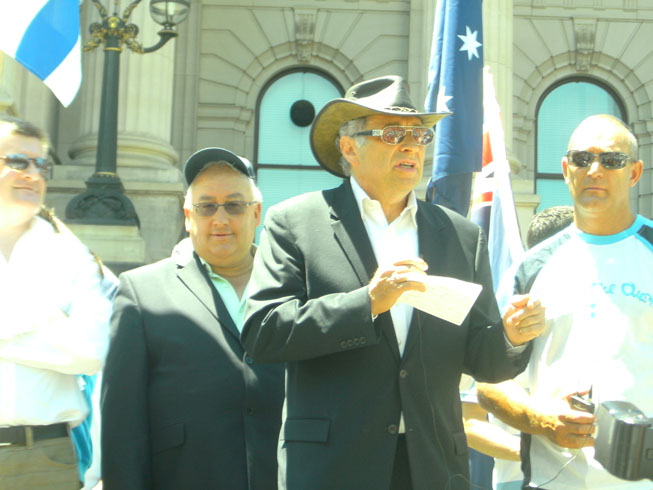 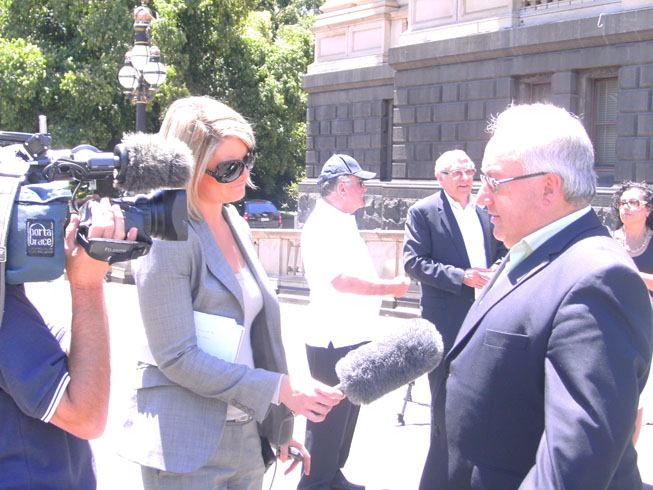 Prime Minister Kevin Rudd has called on Hamas militants to stop firing rockets into southern Israel and has urged both parties to negotiate a ceasefire.

Israeli troops are continuing a ground assault against Hamas militants in the Gaza Strip.

Mr Rudd says he is concerned by the conflict and supports efforts by the United Nations to help bring an end to fighting.

"Any diplomatic solution must find a way in bringing a halt to rocket attacks against Israel by the terrorist organisation Hamas," he said.

"Any diplomatic solution must also bring about a halt to armed shipments into Gaza."

This is how the ABC reported Kevin Rudd:

This is how Kevin Rudd's own website puts it:

It"s great to see that so many of you turned up in Melbourne. One of the newspapers reports that "Australian Jews" condemn what Israel is doing in Gaza and the short article I read on Kevin Rudd"s commentary sounded like he was trying to appease everybody including the actions of the UN to shut Israel down and force them to bow to international pressure. The Australian has carried commentary by a Jewish commentator on the situation in a very prominent place which was a really pleasant surprise. We know the far Left of the media is always going to bash Israel at every turn. Now"s the time to take action and not to be cowed by those who sit in safety passing judgment. When their neighbors start lobbing rockets into their backyard and they have to live in bomb shelters, let them talk. Go Israel!!

I was at this Rally with a poster: "The Age" supports Hamas

Well done you guys, thanks for your support, we appreciate it here in Israel. Let"s remember that although the Hamas charter still calls for the destruction of Israel, so does the PA charter. This has never been rescinded in spite of promises to do so.

Senator Fifield at least stood in public in support of Israel defending itself against Hamas. However to then indicate that the P.A. is perhaps "kosher" and this wouldn"t happen if they were in control smells of typical politics. Let us be reminded that those faithful to the teachings of Muham mad and Islam only seek the destruction of Israel regardless of what garments they wear. A wolf in sheeps clothing is still a wolf. None the less we need to thank Senator Fifield for support shown.

Congratulations Melbournians. We in sleepy Sydney, the current home of the ECAJ are being oh so very correct and so diplomatically sophisticated, that we almost frighten ourselves with our cleverness. The interesting point is that the mohammedans who demonstrate to stop the attacks on their coreligionists are in fact supporting Hamas, a member of the grouping of islamofascists that just today murdered another Australian soldier in Afghanistan. A fine lot of future Aussies we have and an even finer mob of terrorism cheer-leaders at the ABC, SBS and the Fairfax press.

It was a great rally. Hopefully next time there will be more of the community supporting it however. The speakers were outstanding.