Geert Wilders and the Fight for Europe 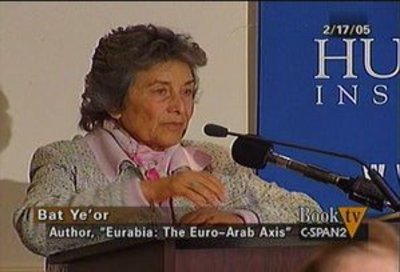 Second Maccabees, 7:21—“Yea, She exhorted every one of them in her own language, filled with courageous spirits, and stirring up her womanish thoughts with a manly stomach…”

Bat Ye’or, my inspiration, mentor, and dear friend has written an important essay, published today at NRO. Elucidating how Geert Wilders is pitted against the cultural, monetary, and military machinery of the 57 Muslim member nations of the Organization of the Islamic Conference—whose bluff as “bulwark” against the Orwellian phantasm of “un-Islamic terrorism” I called here—Bat Ye’or’s essay poses this existential question: “Does defending Western values constitute ‘inciting hatred’?”

Below is the full essay by Bat Ye’or:

Britain has just witnessed the spectacle of a duly elected parliamentarian from another EU country, Geert Wilders of the Netherlands, being denied entry to the country because he constituted “a threat to public policy.” Wilders, after being detained briefly at Heathrow, was sent back to Holland — where he has further legal troubles. Three weeks earlier, a Dutch appeals court had ordered prosecutors to begin criminal proceedings against Wilders for “inciting hatred and discrimination” and “insulting Muslim worshippers” through his public statements and his 2008 film, Fitna. The order to proceed with the criminal prosecution resulted from pressure put on European states and on the UN Human Rights Council by the Organization of the Islamic Conference (OIC). The OIC’s aim is to punish and suppress any alleged Islamophobia, around the world but particularly in Europe, and it has been leader in creating the conditions that made the U.K.’s Wilders ban possible.Islam and Dhimmitude: Where Civilizations Collide and Eurabia: The Euro-Arab Axis, both from Fairleigh Dickinson University Press.

The OIC is one of the largest intergovernmental organizations in the world. It encompasses 56 Muslim states plus the Palestinian Authority. Spread over four continents, it claims to speak in the name of the ummah (the universal Muslim community), which numbers about 1.3 billion. The OIC’s mission is to unite all Muslims worldwide by rooting them in the Koran and the Sunnah — the core of traditional Islamic civilization and values. It aims at strengthening solidarity and cooperation among all its members, in order to protect the interests of Muslims everywhere and to galvanize the ummah into a unified body.

The OIC is a unique organization — one that has no equivalent in the world. It unites the religious, economic, military, and political strength of 56 states. By contrast, the European Union represents half as many states and is a secular body only, and the Vatican — which speaks for the world’s 1.1 billion Catholics — is devoid of any political power. Many Muslims in the West resist the OIC’s tutelage and oppose its efforts to supplant Western law with sharia. But the OIC’s resources are formidable.

The organization has numerous subsidiary institutions collaborating at the highest levels with international organizations in order to implement its political objectives worldwide. Its main working bodies are the Islamic Educational, Scientific, and Cultural Organization (ISESCO), which seeks to impose on the West the Islamic perception of history and civilization; the Observatory of Islamophobia, which puts pressure on Western governments and international bodies to adopt laws punishing “Islamophobia” and blasphemy; and the newly created Islamic International Court of Justice. As stated in its 1990 Cairo Declaration on Human Rights in Islam, the OIC is strictly tied to the principles of the Koran, the Sunnah, and the sharia. In a word, the OIC seeks to become the reincarnation of the Caliphate.

The OIC regularly reiterates its commitments to protecting the political, historical, religious, and human rights of Muslims in non-OIC states, especially Muslims who form the majority in specific regions of non-Muslim countries — such as the southern Philippines, southern Thailand, and western Thrace in Greece — as well as Muslims in places like the Balkans, the Caucasus, Myanmar, India, and China. The OIC supports Hamas and the Palestinians in their struggle to destroy Israel, as well as the Muslim fight for “legitimate self-determination” in “Indian-occupied Jammu and Kashmir.” It has condemned the “continual Armenian aggression against Azerbaijan,” and it expresses its full solidarity with “the just cause of the Muslim Turkish people of Cyprus” and with Sudanese President Omar Hassan Al-Bashir, whom many hold responsible for encouraging the massacres in Darfur. The seat of the OIC is in Jeddah, but the organization regards that location as temporary: Its headquarters will be transferred to al-Kods (Islamized Jerusalem) when that city has been “liberated” from Israeli control.

In its efforts to defend the “true image” of Islam and combat its defamation, the organization has requested the UN and the Western countries to punish “Islamophobia” and blasphemy. Among the manifestations of Islamophobia, in the OIC’s view, are European opposition to illegal immigration, anti-terrorist measures, criticism of multiculturalism, and indeed any efforts to defend Western cultural and national identities. The OIC has massive funding from oil sources, which it lavishly spends on the Western media and academia and in countless “dialogues.” It influences Western policy, laws, and even textbooks through pressures brought by Muslim immigrants and by the Western nations’ own leftist parties. Hence, we have seen Kristallnacht-like incitements of hate and murder against European Jews and Israel conducted with impunity in the cities of Europe — where respect for human rights is supposed to be one of the highest values.

Geert Wilders is the latest victim of this enormous world machinery. His crime is maintaining that Europe’s civilization is rooted in the values of Jerusalem, Athens, Rome, and the Enlightenment — and not in Mecca, Baghdad, Andalusia, and al-Kods. He fights for Europe’s independence from the Caliphate and for its endangered freedoms. He had received serious death threats even before Fitna was released.

Many Muslims in the West support him, but Geert Wilders’s principal weapons are his courage and his willingness to resist even his own government, which is slowly submitting to the OIC’s pressures. Wilders’s enemies pretend that he is an insignificant personality who makes “provocative” statements only in search of fame. In fact, if his motivation were self-interest, he could do far better by courting the OIC’s favors — as so many Europeans are doing, consciously or unconsciously — rather than risking his freedom and indeed his life.

— Bat Yeor is the author of studies on the conditions of Jews and Christians in the context of the jihad ideology and the sharia law. Recent books include: Islam and Dhimmitude: Where Civilizations Collide and Eurabia: The Euro-Arab Axis, both from Fairleigh Dickinson University Press.

It ain"t gonna happen. Both the Vatican and the Church of England are full of PC (politically correct) pussies, and the CofE is also full of Israel bashers. They have completely lost the plot. The US,Soviet Union and the Eastern European states would seem to be the only places that might eventually stand up for their identities.

Maybe it is time for a Supra-Chriatian organization be created not for the purpose to haggle ideology, but a unified front to answer Islamic orgainzations such as the OIC.

What is shaping up as a clash of civilisations is actually a clash of religions, except that one religion has been emasculated by not having any political power. No wonder the other side is winning! Another take on this is that the religious faith of the Moslems almost guarantees them victory against the non-religious secularists who haven"t got any clear lines to defend or faith to sustain them in the long and difficult struggle. It completely amazes me, though, how liberal left-wingers who are so politically correct, anti homophobia, pro women"s rights, anti war and anti racism prostrate themselves to and march together with mobs who represent the complete opposite. What mechanism enables people to lie so blatantly to themselves? How do they live with the contradiction?

At the same time as Geert Wilders is being deported from Britain because of his stance on global Islamisation, our Foreign Affairs Minister Stephen Smith is visiting Pakistan. According to "AM" this morning, Mr Smith was visiting Khyber Pass at the same time the Taliban signed a deal with Pakistan to introduce shariah law in the Swat Valley (Pak.). When speaking of the introduction of sharia law, Mr Smith said, "in the past we have seen on at least one occasion a similar agreement entered into which hasn"t seen a positive outcome. We hope on this occasion it is a positive outcome." Rasheed Ahmed (Mr smith"s counterpart in Pakistan) stated that Australia "needs to get serious" if it wants to improve bilateral ties." In recent times the Australian Government has increased financial, education and military support to Pakistan. One would seriously believe that a democratically elected minister may have a little more knowledge about the barbarism of sharia law (ie) the invisible women,forbidden education, genital mutilation and honour killings. It"s obviously not enough for Mr smith to visit the the perpetrators of such misery as sharia law but financially support their ideology as well. A more appropriate level of government support would be to allow Geert Wilders to reside in this country.

I agree with Gabrielle"s point and would merely augment those by stating my astoundment that liberal, secular, Western democracies so readily conform to the blackmail of their inferior colonisers. On a different tack I would point out that while our political leaders, like a well trained pack, uniformly bay that there are different strains of Islam with many moderates among them, the OIC consistently adopts the position of the most extreme among them.

Defending Western values -- those pillars of freedom and humanity -- respect for the individual,the rule of law, equality of all before the law, the robust debating of ideas, the protection of minorities -- is absolutely essential if we are to overcome the mind-numbing brutality of enforced Islamic shariah: conformity, poverty bararism and the death of the spirit.