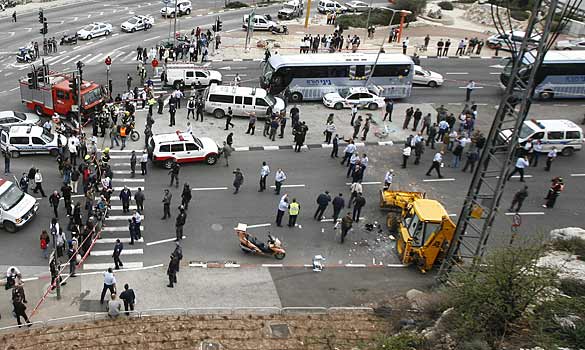 A Palestinian bulldozer driver ran amok on a busy Jerusalem highway on Thursday, ramming his vehicle into a bus and smashing a police car before being shot dead by a policeman.

It was the third such incident involving a beserk bulldozer driver in a year. Israeli police immediately labelled it a terrorist attack while Hamas, the militant Islamist movement, said the attack was a “natural response” to controversial Israeli government plans to demolish dozens of Arab homes in the eastern half of the city.

No Palestinian militant faction claimed responsibility for the attack, although a senior police officer said a copy of the Koran was found in the cab alongside the body of the driver, who was shot dead by a policeman.

The attacker slammed his heavy-duty digger first into the side of a bus and then rammed a police car, injuring the two officers trapped inside. The driver flipped the patrol car into the air and then smashed it with his front shovel. The attack took place on a major traffic intersection close to the city’s largest shopping mall.

In both previous instances of bulldozer drivers crushing cars – the first of which left three people dead – the slain assailant turned out to be Arab residents of East Jerusalem, prompting calls for their family homes to be demolished in retaliation.

Hamas was referring, however, to plans by Jerusalem’s council to raze at least 88 homes built by Arab residents without full permits from the authorities, leaving more than 1,000 people homeless. Residents of the area affected call the order “ethnic cleansing” and say that Israel refused to grant them permits while allowing Jewish settlers to build entire towns in the occupied West Bank.

Hamas, which fought a bloody three-week battle in Gaza with the Israeli army earlier this year, said the attack was the result of Israel’s offensive against it, and a reaction to the planned home demolitions which Hillary Clinton, who has just flown out of the country, called “unhelpful” to any peace process.

"The operation in Jerusalem was a natural response to aggression against our people. The Zionist enemy should realise that they alone bear the responsibility for displacing our people in Jerusalem and for the killings in Gaza and the West Bank," said Mushir al-Masri, a senior Hamas official.

Following the previous attacks, and a similar one where an East Jerusalemite slammed his car into a group of Israeli soldiers at a pedestrian crossing, the security forces have pondered how to halt more assaults using vehicles. Residents can pass easily from the mainly Arab East Jerusalem, captured in the 1967 war, to the predominantly Jewish western half and the rest of Israel, and many are used as cheap labour in construction programmes.

Nir Barkat, Jerusalem's new mayor who has in the past backed the destruction of attackers’ family homes, said at the attack site that he would recommend the authorities take "the harshest measures we can take by law" against those involved in the attack. “It was simply an attack meant to murder innocent people,” he said.

Violence rumbled on in the Gaza Strip as well, where an Israeli air strike killed two Islamic Jihad militants who had fired an anti-tank missile at Israeli forces across the heavily guarded border fence.

No Israeli soldiers were wounded in the attack, which came hours after a previous Israeli air raid killed two other members of the group. Three rockets were also fired by Gaza militant into southern Israel today, causing no harm.