On Aug. 4-5, 2009, the Fatah movement will convene its Sixth General Conference - the first such gathering in 20 years and the first since the 1993 signing of the Oslo Accords. This official gathering offers a historic and unique opportunity for Fatah, and for Mahmoud Abbas, Chairman of both Fatah and the Palestinian Authority, to officially and publicly eradicate four Fatah principles that are basic foundations of the conflict. This would demonstrate to the world and to Palestinians that the Palestinians have joined the peace process.

1- Fatah does not recognize Israel's right to exist. Fatah leaders emphasize that this ideology is current and not merely an oversight.

2- Fatah continues to use maps that don't acknowledge Israel's existence.
President Barack Obama has condemned such maps as a threat to Israel's security: 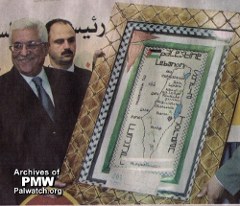 In photo to the right: Fatah website home page

Article 8: "The Israeli existence in Palestine is a Zionist invasion with a colonial expansive base, and it is a natural ally to colonialism and international imperialism."

Article 19: "Armed struggle is a strategy and not a tactic, and the Palestinian Arab People's armed revolution is a decisive factor in the liberation fight and in uprooting the Zionist existence, and this struggle will not cease unless the Zionist state is demolished and Palestine is completely liberated."

Link to Fatah charter on Fatah website
4- Fatah continues to endorse violence and terror
On many occasions Fatah leaders have echoed the Hamas policy of justifying a ceasefire as a temporary or tactical measure:

Mahmoud Abbas: "Now we are against armed conflict because we are unable. In the future stages, things may be different... I was honored to be the one to shoot the first bullet in 1965 [Fatah terror against Israel began in 1965], and having taught resistance to many in this area and around the world, defining it and when it is beneficial and when it is not... we had the honor of leading the resistance. We taught everyone what resistance is, including the Hezbollah, who were trained in our camps [i.e. PLO camps in '60s and '70s]."
[Al-Dustur (Jordan), Feb. 28, 2008]
Muhammad Dahlan, senior Fatah MP: "The political plan guarantees the continuation of our national struggle in all its forms..."
PA TV host: "If so, the [violent] resistance and struggle continue."
Muhammad Dahlan: "This is our right, a legal right. The international community affirms it for us. But it is the responsibility of the leadership to use it when it wants, in the proper place and at the proper time. We cannot leave it in the hands of youth who use their own judgment. This is the difference between [PA] using this right and just anyone using it. I lived with Chairman Yasser Arafat for years. Arafat would condemn [terror] operations by day while at night he would do honorable things. I don't want to say any more about this."
[PATV (Fatah), July 22, 2009]
Conclusion - Historic opportunity for Fatah to join the peace process
- If Abbas's Fatah refuses to recognize Israel,
then a peace process has not yet begun.
- If Abbas sits under a map of Israel as "Palestine",
then a peace process has not yet begun.
- If Abbas's Fatah charter calls for Israel's destruction,
then a peace process has not yet begun.
- If Abbas's Fatah continues endorsing armed conflict,
then a peace process has not yet begun.

The convening of the Fatah Sixth General Conference
is a historic opportunity for Fatah to enter the peace process.
Original article is on PMW
http://palwatch.org/main.aspx?fi=157&doc_id=1181
# reads: 514