Published Sunday June 12, 2011
from the Guardian 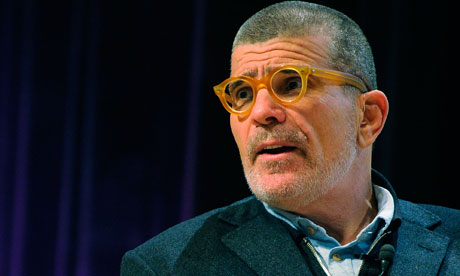 Leading US playwright David Mamet has launched an attack on the British literary establishment over what he claims are inherently antisemitic attitudes.

Many contemporary British authors who write in the liberal tradition, Mamet said, produce plays, books and essays that are full of anti-Jewish "filth".

Speaking to the Financial Times, the Chicago-born writer expanded on the reasons behind a political conversion that was first announced in a piece for the New York journal Village Voice, headlined "Why I am no longer a Brain-Dead Liberal", in 2008.

Asked whether he felt Europe was more sceptical about Israel than the US, the writer said: "There is a profound and ineradicable taint of antisemitisim in the British."

Although Mamet admits to owing a great educational debt to English literature, he accuses classic novelists such as Anthony Trollope and George Eliot of using "stock Jew" characterisations. "And the authors of today," Mamet adds, "I'm not going to mention names because of your horrendous libel laws, but there are famous dramatists and novelists over there whose works are full of antisemitic filth."

The creator of Glengarry Glenn Ross and American Buffalo has just published a non-fiction account of his journey from the political left towards rightwing views. His new book, The Secret Knowledge, is a polemic that targets fundamental tenets of leftwing thinking, from the value of a liberal arts-based education to the importance of environmentalism.

"My revelation came upon reading Friedrich Hayek's The Road to Serfdom," Mamet says in the book. "He wrote that there are no solutions; there are only trade-offs – money spent on more crossing guards cannot be spent on books. Both are necessary, a choice must be made, and that this is the tragic view of life."

Mamet said that for him the "paradigmatic Brit as far as the Middle East goes" is TE Lawrence, author of Seven Pillars of Wisdom and remembered for his portrayal in the film Lawrence of Arabia. "Even before the oil was there, you loved the desert," Mamet told the FT. "But there is a Jewish state there ratified by the United Nations and you want to give it away to some people whose claim is rather dubious."

Mamet's new book praises Sarah Palin's political approach and calls the decision to build an Islamic centre in the vicinity of Ground Zero, the former site of the World Trade Centre, "a cultural obscenity".

David Mamet is the director of a great movie "The Winslow Boy" which is about justice for the little man. Like Howard Jacobson, he is standing up for Jews against the antisemitic leftwing literary establishment. (I"ve read that the London Review of Books was a classic anti-Israel rag.) Good on him.

Three cheers fpor david mamet! He has shown us that soemone who can think can revise entrenched olitical views. There is hope yet

Good for him! If all the prominent Jews started standing up against this rubbish, it would really be a force to be reckoned with. There are so many influential Jews in high places who need to realize that the left, liberal elite are NOT their friend!