Egyptian forces will be brutal on terrorists that attack them, but will not interfere with Hamas and other forces bringing weaponry into Gaza. 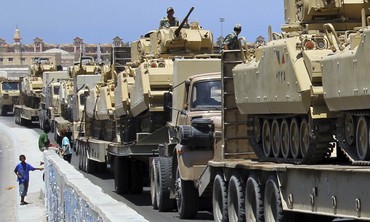 The writer is a Fellow in History at Melbourne University and director of the Zionist Organization of America’s Center for Middle East Policy.

Last week’s failed attack from the Sinai peninsula, in which terrorists killed Egyptian soldiers, was extraordinary. Terrorists operating out of Gaza do not usually attack Egyptians. They can obtain arms and materiel by sea, but the Israeli navy stops this most of the time.

The evidence that it should do so is abundant.

First, there was never a sound reason to leave the corridor. It occurred purely as an unintended byproduct of a flawed Israeli decision to leave Gaza. This unilateral withdrawal was widely criticized by the most senior military and security figures, including the former and then-serving heads of the Shin Bet (Israel Security Service), the former IDF chief of staff, deputy chief of staff and chief of IDF Intelligence, and two former heads of the Mossad.

Even so, leaving Philadelphi was not part of the original plan. That outcome was due to unexpectedly strong pressure from the George W. Bush administration, secretary of state Condoleezza Rice in particular. In short, even those who supported the unilateral withdrawal did not reckon on relinquishing control of the Gaza/Egypt border.

Second, following the withdrawal, the evidence rapidly accumulated that the system of Egyptian troops, Israeli intelligence and international monitors instituted to replace direct Israeli supervision of the border was no substitute. Instead, there was an exponential increase in the quantity of offensive weaponry entering Gaza from Egypt.

Already in 2006, the former OC Southern Command, Maj.-Gen. Doron Almog, said that “there is a need for a permanent IDF presence in the area,” while the late doyen of military analysts, Zeev Schiff, observed that “even though Israel’s security and intelligence services have given the Egyptians a list of the names of those involved in the gun running... in practice nearly nothing is being done to prevent large-scale smuggling through the Philadelphi Route.”

Third, alterations last year to the security annex of the Egyptian/Israeli peace treaty to enable Egypt to deploy a further 2,500 troops in Sinai, in addition to the 700 already on the border, have achieved nothing. The reason is not hard to find and indeed is even more obvious now than when the annex was altered: the Egyptian forces are too much in sympathy with the terrorists and too loath to clash with Hamas to engage in a thorough- going campaign of terrorist suppression.

Egyptian forces will be brutal on terrorists that attack them, but will not interfere with Hamas and other forces bringing weaponry into Gaza.

It is therefore not a matter of troop numbers but of will. Where the efforts to stamp out the traffic in men and arms are tepid, grudging and spasmodic, large battalions will not avail. And nothing – least of all the change of regime in Cairo – suggests that the willpower that was once lacking has been found.

Fourth, the recent murderous attack on Egyptian soldiers underscores all of the foregoing, while providing Israel with an opportune moment to act. The security threats from Gaza to Israel have multiplied. Terrorism emanating from Sinai has also reared its head. Last August, it claimed Israeli lives; this August, Egyptian lives. Border clashes between Israel and Egypt, once a rare occurrence, look like becoming routine. All such incidents carry the risk of putting the nail in the coffin of Egyptian/Israeli peace treaty and even producing a war.

Accordingly, the case is strong: without having to clash with an internationally recognized regime holding authority in Gaza by treaty, without resuming control of Palestinian civilians, and to the mutual benefit of Israel and Egypt – admittedly a benefit Mohamed Morsy and the Brotherhood would rather forfeit – Israel can reoccupy the Philadelphi Corridor. It would then be able, as it once was, to reduce drastically the traffic of men and arms into Gaza.

Egypt will find the means to protest this development, but it is hard to see how it can make much hay of it. In any case, a more tightly sealed Hamas is a weaker Hamas, one for which there are fewer reasons for Egypt to stick out its neck to help. And a Gaza that is deprived of weaponry in time becomes a far more containable and reducible threat to Israel. International criticism of any such Israeli move will be hamstrung for lack of any serviceable rationale justifying its stance. There is little scope to protest cutting off the traffic in terror that helped produce last week’s attack.