Exterminating Christians in the Middle East

Recently I saw a riveting new play, “My Report to the World: The Story of Jan Karski.” In 1943 Karski, a member of the Polish Catholic underground, was the first eyewitness to the Warsaw ghetto and a Nazi concentration camp to reach the U.S. He sought to convince President Franklin D. Roosevelt and Supreme Court Justice Felix Frankfurter that Judaism was being systematically wiped out by the Nazis. Frankfurter told Karski he couldn’t believe it because the horror was unfathomable.

A similar story is playing out again, as Christians are being wiped out in the Middle East. On his recent trip to Latin America, Pope Francis said, “Today we are dismayed to see how in the Middle East and elsewhere in the world many of our brothers and sisters are persecuted, tortured and killed for their faith in Jesus.” He continued: “In this third world war, waged piecemeal, which we are now experiencing, a form of genocide is taking place.”

Middle Eastern Christians are being exterminated by Islamic State, or ISIS, simply because they are Christians. As Jews were forced to wear the yellow Star of David, Christian homes are marked with the Arabic letter “N” for Nazarene. Iraqi Sister Diana Momeka testified to the House Foreign Affairs Committee in May that “ISIS’s plan is to evacuate the land of Christians and wipe the earth clean of any evidence that we ever existed.”

There is another grisly similarity: In the 1940s Jewish refugees were turned away by the U.S. and other countries. Karski recalled in a 1995 interview: “The Jews were abandoned by all governments.” 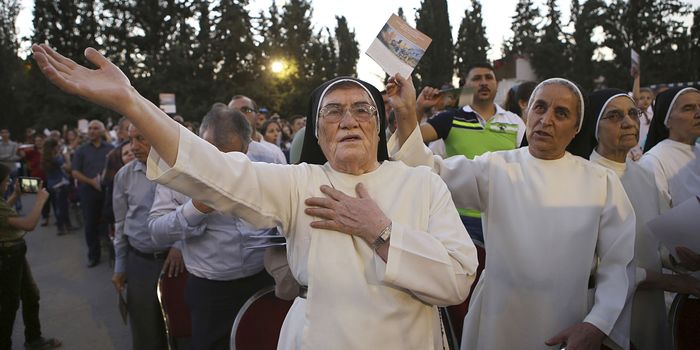 Today’s persecuted Christians also have nowhere to go. The Rev. Emanuel Youkhana, the head of Christian Aid Program Northern Iraq, told the New York Times in July that the West comes up with visas for “a few hundred people. What about a few hundred thousand?”

The Catholic News Agency reported on Aug. 5 that “since October 2014, 906 Muslim refugees from Syria were granted U.S. visas, while only 28 of Syria’s estimated 700,000 displaced Christians were given the same. Even when accounting for population percentages (Christians account for 10% of the religious makeup of Syria), the numbers of visas granted seems widely disproportional.” In response, Chaldean Archbishop Bashar Warda of Erbil said at a press conference this month that “our people are asking these questions: how come we apply for the American visa and are denied?”

After 1948, when the Jews were purged from the Arab Middle East, they could at least go to Israel. There is no equivalent for Middle Eastern Christians. Furthermore, the world is no longer forced to rely on a single pair of eyes as in Karski’s day. The forced conversions, the beheadings, the slaughter of Copts on a Mediterranean beach—these horrors are all available on YouTube.

Dr. Patrick Sookhdeo, the international director of the nonprofit aid group the Barnabas Fund, told the London Telegraph in July that the situation was evolving into a genocide. “So many British Christians have been in contact with us to tell us that they have a spare room or even a second home in which they want to welcome Syrian and Iraqi Christians,” he said. “Yet our government seems determined to turn its back on some of the most vulnerable people in the world.”

Here’s an illustration of what such organizations can accomplish: The Barnabas Fund’s Operation Safe Havens program has pressed governments to issue visas to persecuted Christians, on condition that the organization will foot their expenses. Poland, Karski’s homeland, is granting visas for an initial several hundred families. Barnabas is joining with a Polish nongovernmental organization, known in English as the Esther Foundation, to help the refugees integrate into society.

Refugees are being connected to local Polish church congregations—from Warsaw and Katowice to Gdańsk and Koszalin. The total cost to rescue one individual is a modest $3,000, including airfare and a year’s basic support.

In June some 60 Polish nongovernmental organizations reminded their government of their people’s historic commitment to solidarity. The leaders wrote in an open letter: “If we are to call Poland ‘the cradle of Solidarity,’ if we declare that we hold freedom and human rights dear, we should commit to providing assistance and support to those who cannot return to their home countries.”

So why can’t the U.S. do something similar? Knowing without doubt the evil and death unleashed on Christians, shouldn’t we let in as many refugees as we can? Americans are renowned for personal generosity toward the afflicted. Private charities, churches and individual citizens should challenge the government to provide visas for Christian refugees whose funding and care private Americans would guarantee.

Before his execution by the Nazis in 1945, the theologian Dietrich Bonhoeffer warned against the West’s moral failures toward tyranny, and his words still apply: “Silence in the face of evil is itself evil,” he said. “Not to speak is to speak. Not to act is to act.”

Mr. Reilly is the director of the Westminster Institute in McLean, Va.

I can only wonder why the Christian community of the ME does not take up arms ...?