Athens (AFP) - Two men who French police are seeking to identify in connection with the Paris attacks registered as migrants with Greek authorities earlier this year, the Greek police confirmed on Saturday. 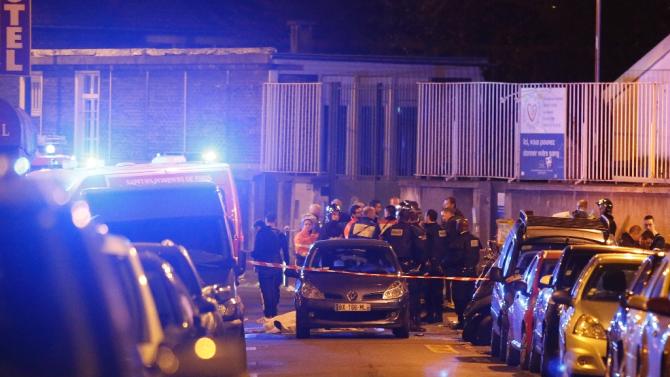 Security cordon off the area close to Rue Bichat following several attacks in the French capital Paris, on November

Both were thought to have registered in Greece, the main entry point into Europe for Syrian refugees.

At least one Syrian passport was found at the scene of the Stade de France attack.

The Greek minister for citizen protection, Nikos Toskas, said in a statement that one of the men had been registered on the Greek island of Leros in October.

"We confirm that the (Syrian) passport holder came through the Greek island of Leros on October 3 where he was registered under EU rules," said a statement issued by Toskas.

French police said the passport was found "near the body of one of the attackers" during the investigation into the main attack of Friday's carnage, at the Bataclan concert hall, where 82 people were killed.

The authenticity of the passport was being checked, but its discovery indicates a possible Syrian connection which has been a working hypothesis for investigators after assailants hit six separate locations in Paris late Friday.

A Greek police source said the second man had also registered in Greece, with TV station Mega adding this was also on Leros in August.

European security officials had long feared that jihadists could take advantage of the mass migration influx, mainly from war-torn Syria, that Europe has been experiencing since the beginning of the year.

"It is clear now that together with the victims of Islamo-fascism in the Middle East that come as refugees, extreme elements are crossing to Europe," Defence Minister Panos Kammenos after an emergency meeting with Prime Minister Alexis Tsipras.

Greek police are not ruling out that the Syrian passport changed hands before the attacks.

However, a European security expert on Saturday argued: "The most logical assumption is that it's the same person, sent on a mission to Europe."

"If this is established, it would be the first such case. In any event, this proves that the unchecked flow poses an unequalled challenge for European security. We simply don't know who is coming through," the expert added.

Greece's junior minister for migration Yiannis Mouzalas had admitted in September that it would be "foolish" to completely discount the possibility of jihadists sneaking into Europe among the refugee wave.

Over 800,000 people have crossed the Mediterranean to Europe this year, with over 3,400 dying in the process.

But Mouzalas noted that the number of Europeans joining extremist groups in the Middle East was far higher.

"The opposite is happening. They leave from here and go over there," he said.

Prime Minister Alexis Tsipras on Saturday insisted that the refugees fleeing Syria "are hunted by the same terrorists" that struck in Paris on Friday.

"We must find solutions to the drama of the people who leave their homes, hunted by the same terrorists, and drown in the Mediterranean," Tsipras said in a televised address, after conferring with his police, migration and intelligence chiefs
# reads: 417