Fatah, with Mahmoud Abbas at the Helm, Confirms the Confrontation Strategy toward Israel

The Fatah Central Committee gave its backing to a strategy that combines the terror intifada with diplomatic and legal moves in the international arena aimed at achieving recognition of the state of Palestine as well as an Israeli withdrawal to the 1967 borders with no political quid pro quo from the Palestinians.

The Fatah Central Committee, convened on Sunday, December 6, 2015, at the presidential headquarters in Ramallah. Fatah is led by Mahmoud Abbas (Abu Mazen) who also serves as president of the state of Palestine, chairman of the Palestinian Authority, and leader of the PLO. 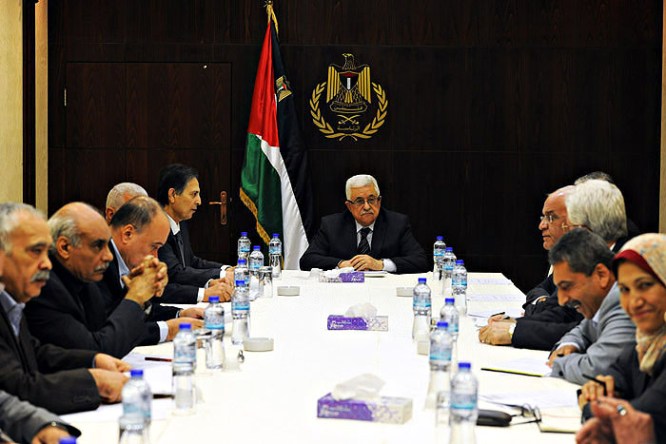 Abbas at a meeting of the Fatah Central Committee

Total Support for the Knife Terror and the Al-Quds Intifada:

The [Central] Committee discussed…the increase in severe attacks against members of our Palestinian people in the occupied state of Palestine (the West Bank, Al-Quds, and the Gaza Strip), including the field executions… The meeting began with readings of Surat Al-Fatihah in remembrance of the souls of the heroic martyrs, and it [the Central Committee] conveyed its condolences and appreciation to the families of the martyrs with hopes for the speedy recovery of the wounded, emphasizing its determination to continue to act in every way to have the prisoners freed and the bodies of the heroic martyrs returned.

The Central Committee did not condemn the acts of violence and terror being perpetrated by Palestinians as part of the Al-Quds Intifada, which is also called the Knives Intifada. On the contrary, it characterized the foiling of terror attacks as “executions,” chose to call the perpetrators “heroes,” and promised to assist their families. The Palestinian leadership thereby gave full backing to the continuation of the terror wave against Israel.

Preparing to End the Security Cooperation with Israel:

[The Central Committee] emphasized its full support for a redefinition of the relations with the Israeli occupation authorities in all areas, particularly with regard to the security, diplomatic, and economic relations, including raising proposals at the [United Nations] Security Council for a resolution on full [UN] membership for the state of Palestine.

Here the Central Committee fully endorsed Abbas’ threat voiced during his address to the United Nations that the Palestinians will stop honoring the agreements with Israel insofar as, in their view, Israel is not committed to implementing them. The Palestinian leadership no longer sees Israel as playing any part in the attainment of international recognition of the state of Palestine; instead the leadership is trying to gain such recognition independently via the UN Security Council. Thus, by taking an approach that circumvents negotiations, the Palestinian leadership seeks to compel a full Israeli withdrawal to the 1967 borders, including a withdrawal from east Jerusalem, without the need for any political quid pro quo on the Palestinians’ part.

Continuing the Lawfare against Israel in the International Arena:

The Central Committee praised the efforts of the national committee dealing with the issue of the International Criminal Court, and noted the need to take whatever measures are required and possible to expedite the launching of the legal investigation of the war crimes committed by the occupation authority [Israel]. Likewise, the Central Committee called to apply the 1949 Fourth Geneva Convention to the lands of the state of Palestine (the West Bank and the Gaza Strip), particularly with regard to the protection of citizens in wartime.

The Palestinian leadership hewed to the line of all-out confrontation with Israel. An important aspect of this approach is the legal arena. They regard the legal route as a force multiplier that can nullify Israel’s right to self-defense and afford legal and international legitimization for ending the “reality of occupation” and for the “right” of the Palestinian refugees and generations of their descendants to implement the “return” to their homes and property within the sovereign state of Israel.

The Central Committee condemned the decision of the occupation municipality to establish new facts in the Al-Buraq [Western Wall] area, and views this as a continuation of the change of the existing situation in the city of Al-Quds and particularly in the blessed Al-Aqsa Mosque and its surroundings.

The wording indicates that the Palestinian leadership, with Abbas at the helm, denies the Jewish right to the area of the Western Wall and regards it as a sacred Islamic site that is an inseparable part of the Al-Aqsa Mosque.

Fatah, with Mahmoud Abbas at the Helm, Confirms the Confrontation Strategy toward Israel