The Jewish story is under assault

The Jewish story is under assault 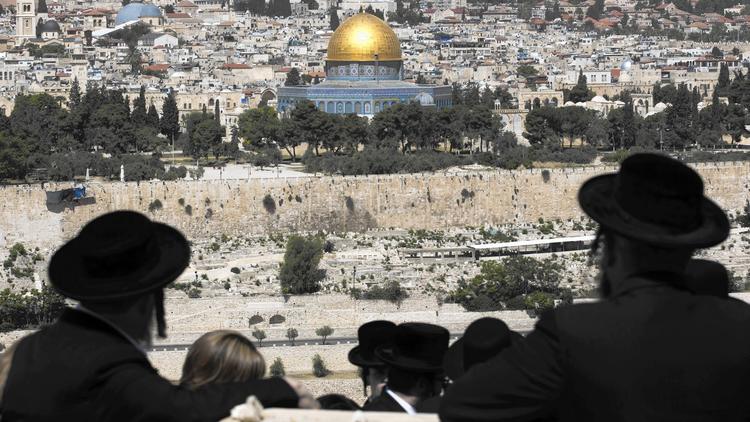 Ultra-Orthodox Jews walk through the ancient Jewish cemetery on the Mount of Olives in Jerusalem's old city on April 17.

Who are the Jews? A religion? A people? The question has taken on a special urgency in our time. At the heart of the anti-Zionist assault is the notion that the Jews aren't a people but only a faith. That premise is normative throughout the Arab world, and especially in the Palestinian statehood movement, all of whose factions deny the existence of a distinct Jewish people with a right to national sovereignty.

The Jewish calendar tells a different story. On Passover, we celebrate the birth of the Jewish people through our escape from Egypt; it's the beginning of a coherent historical narrative. On Shavuot, two months later, we celebrate the giving of the Torah at Sinai, imprinting the Jewish people with a distinct path to God. The Jews, then, are a people with a specific faith. In that order.

The Passover Seder implicitly reinforces that hierarchy of identities. The essential Seder ritual is the retelling of the exodus — “as though you yourself left Egypt” — and the message is: There is no Judaism without the Jewish people and its story.

My late teacher, Rabbi David Hartman, noted that the definition of Jewish heresy provided by the Haggadah, the text read at the Seder, simultaneously offers a definition of Jewish identity. The “evil child” of the Haggadah refers to the Jewish people as “you” rather than “us.” Unlike Christianity and Islam, where heresy is the rejection of belief, for Judaism heresy is self-exclusion from the community.

As a religious Jew, I believe that our relationship to God is the purpose of Jewish existence. I believe that contemporary Jewish life has been impoverished by the diminishment of the Divine, the abandonment of the quest for the living God in our collective and personal lives.

Yet I also believe that peoplehood is more crucial to Judaism than faith. How else can we make sense of the Jewish atheist? Christians or Muslims who reject religious doctrine are no longer a part of their faith community, while Jews who reject Judaic beliefs but still identify with the Jewish people, its values and its fate are universally regarded among Jews as one of us.

Peoplehood is given primacy over faith for the sake of the faith itself: The Jewish people is the carrier of Judaism.

All three monotheistic faiths share the same goal: the revelation of God's presence in this world. But Judaism, once again, works a little differently. While one can of course convert and become a Jew, Judaism was never intended to be a universal faith, only the faith of a specific people — whose purpose is to be a spiritual avant guard within humanity for its eventual redemption. Judaism is a particularist strategy for a universalist goal.

In its early stages in 19th century Germany, Reform Judaism tried to turn Jewish identity into a faith without a people and a land, insisting that its Zion was Berlin, not Jerusalem. Ultimately, though, the Reform movement returned to a more classical understanding of Jewish identity. Even ultra-Orthodox Jews, who routinely place the most strict interpretation of Jewish law over the well-being of the Jewish people, accept peoplehood as a core religious principle.

The Seder culminates with the affirmation, “Next year in Jerusalem,” a reminder that the Jewish story that begins in Egypt ends in the land of Israel. We're a specific people bound to a specific place.

Last week, as Jews around the world prepared for Passover, the war against the Jewish people and its story — against the meaning of Passover itself — took a particularly ugly turn. A UNESCO resolution, sponsored by seven Arab countries, denounced Israel for supposed violations of Muslim rights to prayer on the site that Muslims call the Haram el Sharif and Jews call the Temple Mount. The resolution ignores the fact that the Israeli government enforces a ban on Jewish prayer at the holy site, granting Muslims exclusive right to pray there. Worse, the resolution implicitly denies the Jewish connection to the area by never actually using the term Temple Mount (only Haram el Sharif). It does refer to the Western Wall, but places that label in quotation marks while leaving the Muslim equivalent, Al Buraq, intact, as though that were the only authentic name.

Reading the resolution, one could conclude that there was no ancient Jewish temple on the Temple Mount, that the Mount isn't the holiest site in Judaism, that the Western Wall isn't the heart of Jewish prayer. One could conclude, therefore, that the Jews living in Israel today have no historic claim to the land, passed down through generations. Of all the attempts to destroy us throughout our history, the campaign against history itself is the most devious.

Passover suggests this definition of the Jews: We are a story we tell ourselves about who we think we are. The current assault on the Jewish story is so dangerous precisely because it strikes at that core idea.

Yossi Klein Halevi is a senior fellow at the Shalom Hartman Institute in Jerusalem. He is author of “Like Dreamers: The Story of the Israeli Paratroopers Who Reunited Jerusalem and Divided a Nation.”