Investigators in Buenos Aires have concluded that prosecutor Alberto Nisman was murdered in 2015, hours before he was to testify in Congress against then-President Cristina Kirchner, in a report submitted to a federal court on Friday. Nisman alleged that Kirchner had conspired with Iran to sabotage his investigation into the July 18, 1994, car bombing of the Argentine Israelite Mutual Association in Buenos Aires, which killed 85 people. He filed a criminal claim accusing Kirchner of secretly negotiating a deal with Tehran to offer immunity for Iranian suspects of the bombing in exchange for Iranian oil. 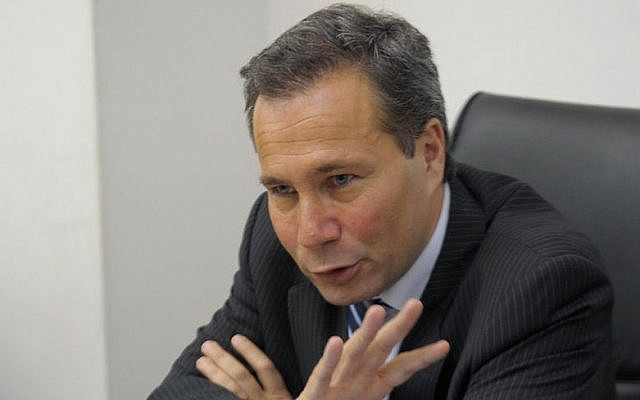 BUENOS AIRES, Argentina — AMIA Jewish center bombing special prosecutor Alberto Nisman was assassinated by two people, who drugged and beat him and then manipulated the crime scene to make it look like a suicide, according to an official report.

The report was submitted Friday to federal judge Julián Ercolini and prosecutor Eduardo Taiano, who are investigating the death of the Argentinean prosecutor. If Nisman’s death is investigated as a murder, IT specialist Diego Lagomarsino would be the main suspect.

On January 2015, Lagomarsino said that he went to Nisman’s apartment to give him a “very old” .22 caliber pistol to protect himself. Hours later, Nisman was found dead by a from a bullet for that gun fired from point-blank range above his right ear. So far, Lagomarsino has been charged only for lending the pistol to Nisman.

The report was produced by forensic investigators from the country’s border patrol guard. The new toxicology analysis of Nisman’s body discovered the drug ketamine, an anesthetic mostly used on animals and a party drug. The analysis also found that he had been beaten on his body and that another person tried to subdue and control him. 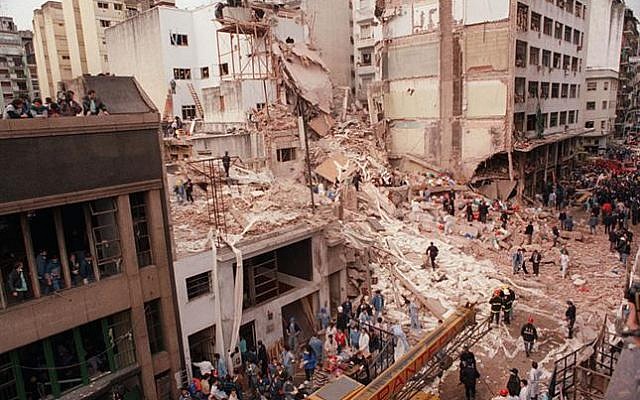 Taiano reportedly is analyzing whether Nisman’s death occurred on January 18, 2015, the night when his body was found, or on the previous day. In that case, Lagomarsino could move even more into the spotlight since he was in Nisman’s apartment twice that day. According to La Nacion newspaper, Lagomarsino is under hidden surveillance out of concern that he might flee justice.

Nisman’s body was found hours before he was to present evidence to Argentine lawmakers that President Cristina Fernandez de Kirchner covered up Iran’s role in the 1994 attack on the AMIA Jewish center in Buenos Aires that left 85 dead and hundreds wounded.

More than a year after Nisman’s death, the investigation was moved to the federal courts, meaning that the case was being investigated as a political murder rather than as a suicide.

Since then, Prosecutor Eduardo Taiano, has led the investigation into Nisman’s death and received death threats. Taiano ordered an interdisciplinary committee to analyze the crime scene and to develop a report. 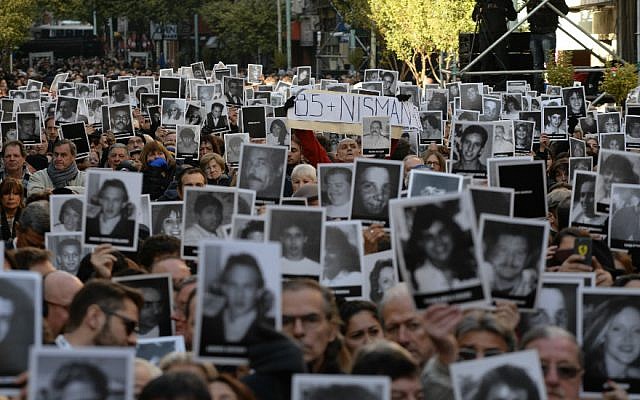 Participants hold photos of some of the 85 victims at a memorial ceremony on the 22nd anniversary of the AMIA Jewish center bombing in Buenos Aires on July 18, 2016. (Leonardo Kremenchuzky, courtesy of AMIA/via JTA)

Argentina has previously accused the Iranian-backed Hezbollah terror group of carrying out the attack AMIA at the direction of Iran. Nisman established how and when Iran commissioned the bombing and that Hezbollah recruited and dispatched the suicide-bomber, Ibrahim Berro, who drove the explosives-filled Renault Trafic van into the building on July 18, 1994, killing 85 innocents.

In addition to the AMIA bombing, Iran also sponsored the March 1992 attack, Nisman established, in which a suicide bomber killed 29 and wounded hundreds in front of the Israeli embassy in Buenos Aires, in the deadliest-ever attack on an Israeli diplomatic mission.

28 government forensic experts of the Gendarmerie police unit, working at a secret facility for seven months, concluded this week that Nisman was killed and had not committed suicide. Investigators assert that Nisman was sedated with the anesthetic Ketamine and then killed by two assailants in his Buenos Aires apartment.