Hamas chief: We won’t discuss recognizing Israel, only wiping it out 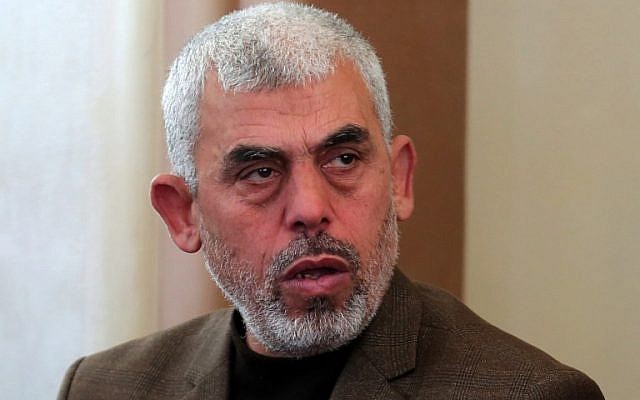 Yahya Sinwar, the new leader of Hamas in the Gaza Strip, attends the opening of a new mosque in Rafah in the southern Gaza Strip on February 24, 2017. (AFP PHOTO / SAID KHATIB)

The Hamas leader in the Gaza Strip on Thursday dismissed US and Israeli demands that it lay down its arms and recognize the Jewish state, saying the terror organization is instead debating “when to wipe out Israel.”

The remarks came during a closed roundtable discussion between Yahya Sinwar and Gazan youth about the ongoing reconciliation negotiations with rival Palestinian faction Fatah, to which some media outlets were invited to attend.

“Over is the time Hamas spent discussing recognizing Israel. Now Hamas will discuss when we will wipe out Israel,” Sinwar said, according to the Hamas-linked news agency Shehab.

A Hamas spokesperson released a few official quotes from the meeting. The Sinwar comment about discussing “when we will wipe out Israel” was not included in the transcript, which featured the Hamas leader again rejecting disarmament and Israel recognition.

“No one in the universe can disarm us. On the contrary, we will continue to have the power to protect our citizens,” Sinwar said, according to the official statement. “No one has the ability to extract from us recognition of the occupation.”

Since its inception nearly three decades ago, Hamas has sought to destroy the State of Israel. 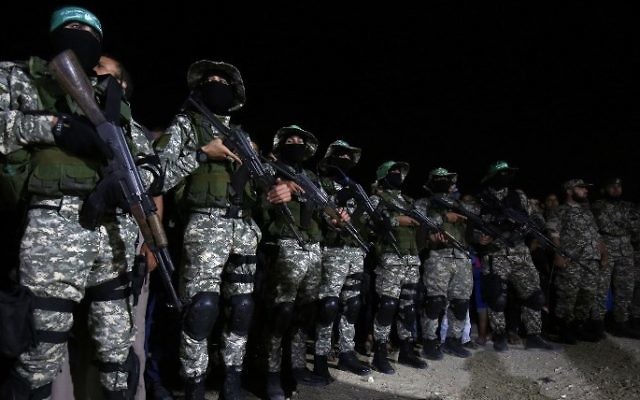 Fighters from the Izz-a-Din al-Qassam Brigades, the armed wing of the Palestinian Hamas terror group, attend a memorial service for a commander killed in an apparently accidental explosion in the southern Gaza Strip on June 10, 2017. (AFP/Said Khatib)

Sinwar’s comments on Thursday came as much of the international community was scrutinizing the terror organization as it attempts to join the internationally recognized government of the Palestinian Authority, which is controlled by PA President Mahmoud Abbas’s party, Fatah.

On Thursday the United States called for Hamas to disarm and renounce violence before being allowed to implement the highly touted unity deal with Fatah.

“Any Palestinian government must unambiguously and explicitly commit to nonviolence, recognize the State of Israel, accept previous agreements and obligations between the parties – including to disarm terrorists – and commit to peaceful negotiations,” said White House Mideast peace envoy Jason Greenblatt in a statement released by the US Embassy in Tel Aviv.

“If Hamas is to play any role in a Palestinian government, it must accept these basic requirements,” Greenblatt said, in comments later commended by Prime Minister Benjamin Netanyahu.

One issue that threatens to derail the reconciliation process is the question of what will be the future of Hamas’s 25,000-strong military and its weapons arsenal. Abbas said he wants full control of all guns in Gaza.

On Thursday, Sinwar doubled down on Hamas’s stance that it will not relinquish its armed forces. 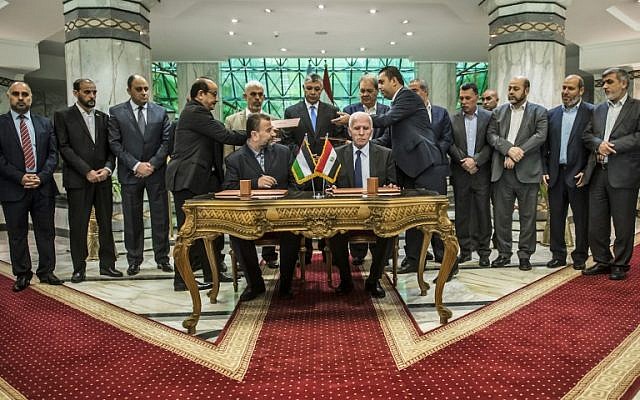 “Disarming us is like Satan dreaming of heaven. No one can take away our weapons,” he said.

He also reportedly admitted that the talks could collapse. “There is a danger to the reconciliation project,” Sinwar was quoted as saying, though he did not elaborate.

Last week, the two rival Palestinian factions signed an agreement in Cairo to allow the PA to take full control of the Gaza, which it was kicked out of 10 years ago by Hamas in a violent conflict.

Speaking immediately after signing the deal, Saleh al-Arouri, the Hamas deputy political leader, said Palestinian unity was vital “so that we can all work together against the Zionist enterprise.”

Sinwar on Thursday reiterated his group’s desire for the reconciliation process to be successful, and personally invited Abbas to hold the next meeting of his party’s central committee and of the Palestine Liberation Organization (PLO), the largest Palestinian political umbrella group, in Gaza.

“I call for the Fatah Central Committee and the Palestine Liberation Organization to hold its next meeting in Gaza, headed by [Abbas],” Sinwar said, according to a Hamas spokesperson. 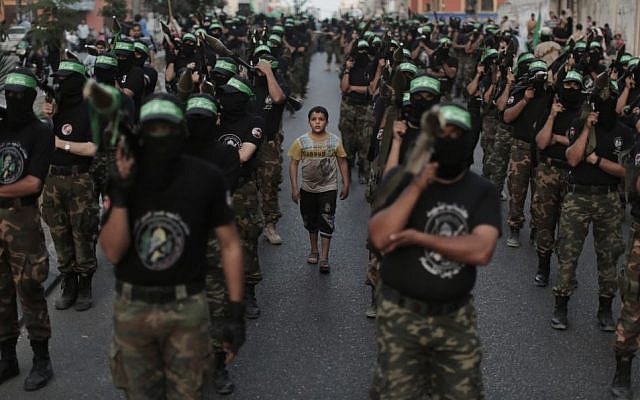 During his talk, Sinwar also touched upon prisoner negotiations between Hamas and Israel.

In his statement, Sinwar reportedly said “we are ready for a second Shalit deal,” a reference to the 2011 prisoner exchange for abducted IDF soldier Gilad Shalit that was his own ticket out of Israeli prison. In the new deal, he claimed, Fatah leader and convicted murderer Marwan Barghouti, as well as others, would go free.

Hamas is said to be holding captive three Israelis — Avraham Abera Mengistu, Hisham al-Sayed and Juma Ibrahim Abu Ghanima — all said to have entered the Gaza Strip of their own accord. Hamas is also holding the bodies of Oron Shaul and Hadar Goldin, two IDF soldiers who were killed in the Strip during the 2014 Gaza war.

Last month it was reported that Hamas had accepted an Egyptian proposal for a prisoner swap with Israel whereby the bodies of 39 Palestinians killed in the 2014 Gaza war, 19 of whom are Hamas members, would be handed over to the group in exchange for Hamas acknowledging the fate of IDF soldiers Hadar Goldin and Oron Shaul. The IDF says the two were killed in the Gaza Strip during the 2014 war. Hamas has hinted that it is holding the two soldiers and has also implied that they could still be alive.

In the second stage of the Egyptian plan, Israel would reportedly release the so-called “Shalit captives” — 58 Palestinians who were rearrested in the summer of 2014 after being set free in the 2011 swap for IDF soldier Gilad Shalit.