Gaza's Yahya Sinwar, purportedly determined to seek Palestinian reconciliation 'for the sake of the children,' wants to be able to say that he tried but Abbas scuppered the process 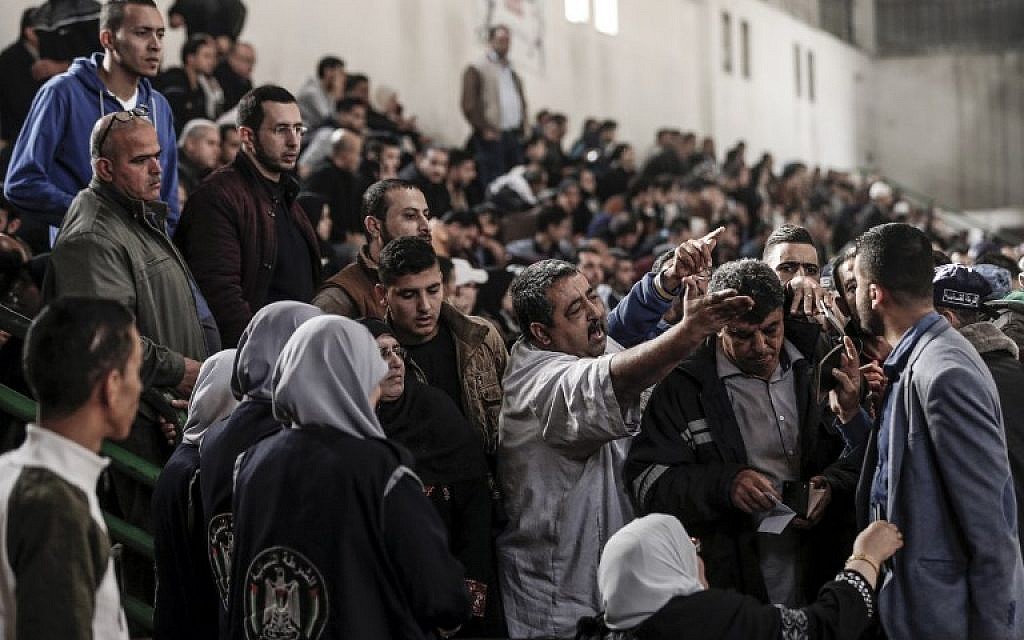 Palestinians argue with Hamas officials and security forces in a makeshift station at a basketball court in Khan Younis in the southern Gaza strip on November 18, 2017 as they await clearance to take a bus to travel through the Rafah border crossing with Egypt. (AFP/Mahmud Hams)

On instructions from Egypt, delegates from the various Palestinian groups showed up in Cairo this week to discuss the “historic” reconciliation agreement between Hamas and Fatah. Almost everyone was there, from the highest-ranking officials from both main groups to representatives of organizations so minor that people wondered why they’d been invited. 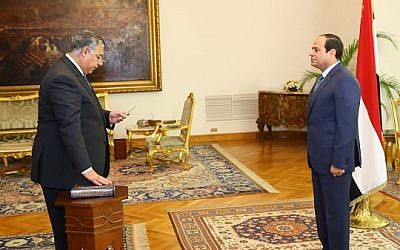 As the gathering began on Tuesday, the director-general of Fawzy’s office, Mazhar Issa, walked around like a proud father among guests at a wedding; also doing the rounds was Samah Kamel, who holds the Israeli-Palestinian portfolio.

But expectations among the many guests were not high. There was a sense that nothing dramatic would be achieved.

And so it proved. When the formal report summing up the conference was released a day later, it was clear that while the unity talks had not collapsed, there had been no substantive progress either.

Even the announcement of elections in the Palestinian territories next year was couched in such vague terms as to be virtually meaningless: “The groups call upon the Central Elections Committee to prepare for the holding of elections by the end of 2018…. The president will set the date when they are to be held.”

Good luck with that.

The statement began with the ostensibly significant declaration that the Palestine Liberation Organization is the only legitimate representative of the Palestinian people — Hamas’s supposed response to a familiar Fatah demand. But since the statement was not actually signed by Hamas, or anyone else for that matter, its importance is actually marginal, if that. 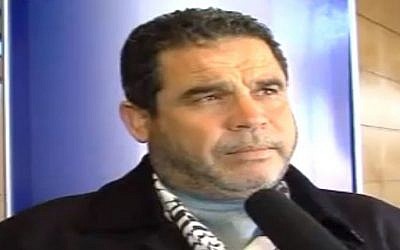 Salah Bardawil, a high-ranking Hamas official, summed up that Hamas had tried to get the sanctions imposed on Gaza by Palestinian Authority President Mahmoud Abbas lifted, and the border crossings opened, so that Hamas could proceed with the reconciliation process, but had not succeeded. He also acknowledged that the summation document was vague (and then apologized for having done so).

It is actually quite remarkable that even now, more than a month after the original reconciliation document was signed in Cairo, the PA still has not lifted those sanctions — the same sanctions that make it difficult to supply electricity to the Gaza Strip, that sent thousands of former PA officials into early retirement, and that prevent the transfer of payments for medical treatment and the purchase of medications for Gaza’s residents. This is why Hamas and Egypt suspect so strongly that the PA is deliberately dragging its feet and has no genuine intention of reaching true reconciliation.

The average Gazan has felt no alleviation of hardship since the agreement was signed. True, Hamas’s roadblock (known as the 4/4) at the Erez border crossing has been dismantled, and Hamas’s security services no longer interrogate and inspect anyone leaving or entering the Gaza Strip there. Hamas has also stopped collecting taxes and customs fees at the Kerem Shalom crossing, which is now staffed by unarmed PA police officers. 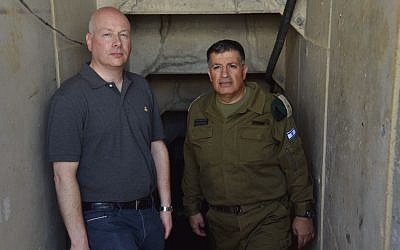 But Maj. Gen. Yoav Mordechai, the Coordinator of Government Activities in the Territories, reported this week that Hamas officials have instead summoned several hundred merchants and demanded that they pay taxes directly to Hamas on merchandise entering the Gaza Strip since the reconciliation deal was signed.

In other words, Hamas is not carrying out the provisions of the agreement all that carefully either. Residential buildings are given only five hours of electricity per day, followed by a 12-hour break. The frequent power outages are preventing the sewage treatment plants from operating, and sewage is flowing at full strength into the Mediterranean Sea, making trips to the beach an unpleasantly smelly affair.

Has anything changed in Gaza, then? Well, again, the border crossings are no longer under Hamas’s control. The PA now runs them, via 140 police officers armed with nightsticks. Hamas’s taxes were lifted, but some of them have been restored. And the Rafah border crossing to Egypt has been opened intermittently. 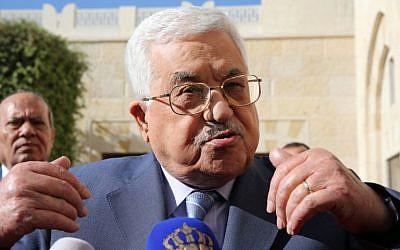 Palestinian leader Mahmud Abbas speaks to the press after meeting with Jordan’s King at the Royal Palace in Amman on October 22, 2017. (AFP/ Khalil Mazraawi)

Overall, one gets the impression that Hamas is the party more eager for reconciliation — or, to be more specific, eager to give up civilian control of Gaza, while retaining all its military and terrorist capabilities — and the Palestinian Authority is in no hurry to take on this nightmarish task.

PA officials in Ramallah are well aware of what running the Gaza Strip means in terms of water, electricity and sewage, and has no particular incentive to take on this responsibility, especially as Hamas’s military wing continues operating independently and doing whatever it wishes. Hamas’s retention of all its weapons is emphatically one of the areas where no change whatsoever has occurred.

There is no agreement on other major issues, either, such as setting up a unity government or the fate of government officials in Gaza. There are an estimated 110,000 such officials in the Strip who receive, or received, salaries from Hamas or the PA, and a solution is needed for them; someone has to pay their salaries. (These are the approximately 40,000 officials of the Hamas administration, the 40,000 PA officials in Gaza who have been sitting at home for the past 10 years, and another 30,000 to 35,000 members of Hamas’s internal security service.)

Hamas’s leaders in Gaza still sound intent on divesting themselves of the ongoing management of Gaza. Ismail Haniyeh, the head of Hamas’s political wing, and Yahya Sinwar, Hamas’s leader in Gaza, sound quite determined about it. 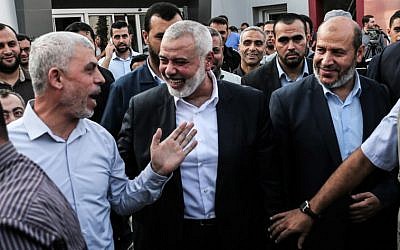 Hamas Chief Ismail Haniyeh (C) speaks with Hamas chief in Gaza Yahya Sinwar (L) upon his arrival on the Palestinian side of the Rafah border crossing, in the southern Gaza Strip on September 19, 2017. (AFP/Said Khatib)

Sinwar, in particular, is going through a certain personal change. He had a daughter just a week ago (his second child, after his son Ibrahim). Six years after he was freed from 22 years in Israeli jails as part of the Gilad Shalit prisoner deal, he has, it is said, been waxing lyrical to those around him about his desire to see reconciliation with Fatah… for the sake of his children.

But make no mistake, Sinwar has not become any kind of moderate, let alone an ardent peace activist. Far from it. He is a strategist, and if reconciliation should fail, it’s a fair guess that he will assert that he tried everything and Fatah is to blame.

Israel remains the bitter, strategic enemy — Hamas curtly dismisses all outside calls to legitimize itself by abandoning terrorism, giving up its arms and recognizing Israel — but on the tactical level, Sinwar is thinking about leading the entire Palestinian people from within the PLO rather than outside it.

The West Bank populace, meanwhile, does not appear all that interested in any move toward unity. Palestinians there seem relatively apathetic to issues that, at one time, were considered vital and consensual: the release by Israel of security prisoners, internal reconciliation, peace. They don’t want their relative tranquility disturbed.

At root, there is little true national unity between the Palestinians in the West Bank and their “brethren” in Gaza. Generalizing, those in the West Bank always regarded the Gazans as somewhat ignorant and extremist; unification with them is no great dream.

As far as Israel is concerned, it should be emphasized that security coordination with the PA in the West Bank has gone back to full strength. The PA is making arrests, preventing terror attacks. IDF and PA security commanders in the various sectors are meeting with one another again and speak daily over the telephone. The PA is working not only against potential terror attacks but also against Dawa, Hamas’s recruiting and financing system. 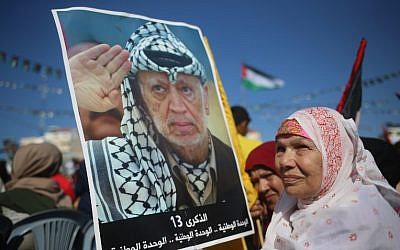 Palestinians hold pictures of late leader Yasser Arafat in Gaza City on November 9, 2017, during a festival to commemorate the 13th anniversary of his death. (AFP/Mohammed Abed)

This raises the question among many members of Hamas in the West Bank: What kind of reconciliation is this, when even political activity by Hamas is prohibited in the West Bank? The tension on this issue is expected to intensify as the 30th anniversary of Hamas’s founding approaches in about three weeks.

Hamas will ask to hold open mass rallies in the West Bank, just as Fatah did on the anniversary of the death of Yasser Arafat in Gaza. It will be interesting to see whether Abbas’s PA will say yes. Maybe the Egyptians will sort it out.