by The Editorial Board

Let Abbas’s Vile Words Be His Last as Palestinian Leader

The editorial board represents the opinions of the board, its editor and the publisher. It is separate from the newsroom and the Op-Ed section. 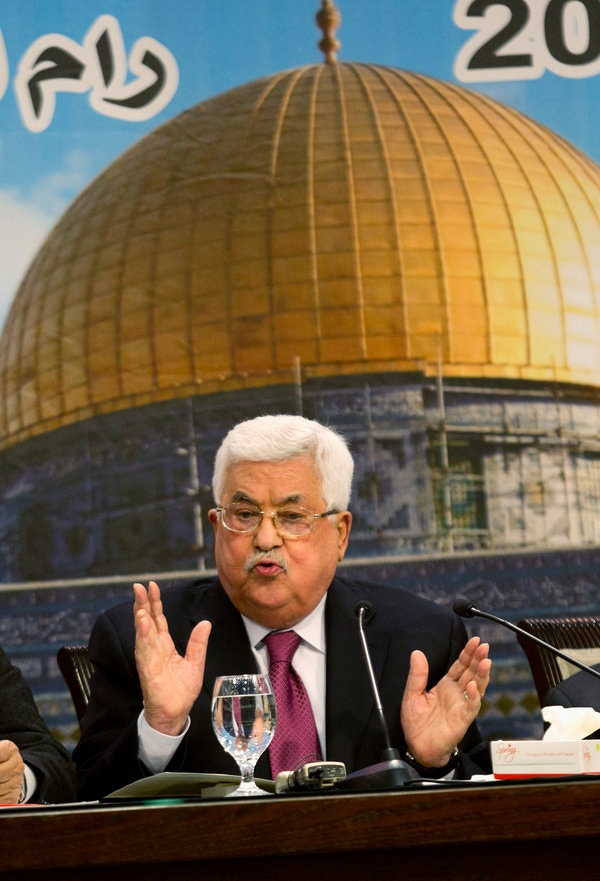 Feeding reprehensible anti-Semitic myths and conspiracy theories in a speech on Monday, the Palestinian Authority president, Mahmoud Abbas, shed all credibility as a trustworthy partner if the Palestinians and Israelis ever again have the nerve to try negotiations.

Speaking to the Palestinian legislative body, Mr. Abbas, 82, said the mass murder of European Jews in the Holocaust was the result of the victims’ financial activities, not their religious identity and anti-Semitism.

“So the Jewish question that was widespread throughout Europe was not against their religion, but against their social function, which relates to usury (unscrupulous money lending) and banking and such,” he said, according to the BBC.

Mr. Abbas’s anti-Semitic tendencies are not new. In the 1980s, he wrote a dissertation that seemed to question the widely accepted Holocaust death toll of six million Jews.

While seen as a successor to the longtime Palestinian leader Yasir Arafat, in 2003 he played down that notion, saying, “The Holocaust was a terrible, unforgivable crime against the Jewish nation, a crime against humanity that cannot be accepted by humankind.”

Things looked more hopeful in 1993 when, in glorious sunshine on the White House lawn, Mr. Abbas, then the foreign policy aide for the Palestine Liberation Organization, and Foreign Minister Shimon Peres of Israel, signed the Oslo Accords, which were supposed to eventually lead to two states and peace.

You have 3 free articles remaining.

In the intervening years, there have been ups and downs in that quest, but the trend for some time has been depressingly downward. The dream of an independent Palestine faded further away and Mr. Abbas came under increasing pressure.

Since the last serious peace talks collapsed in 2014, Israel’s hard-line government has expanded settlement building to cover more of the land envisioned for a Palestinian state. Although President Trump promised a peace plan, none has materialized, but reports suggest it would favor Israel.

Arab nations, once the Palestinians’ patrons, have lost interest and have turned their attention to fighting wars in Yemen and Syria and checking Iran’s regional influence. During a recent meeting with Jewish-American leaders, Crown Prince Mohammed bin Salman of Saudi Arabia faulted Palestinian leaders for complaining and rejecting past Israeli peace offers.

Mr. Abbas opposed Mr. Arafat during the 2000-2005 second intifada, recognized Israel, and committed himself to a nonviolent approach to negotiations for peace and a two-state solution. He was valued by the West as Mr. Arafat’s successor, and for years he has deployed Palestinian forces to help Israelis maintain security in the West Bank.

But pressures, some of his own making and many others caused by Israel, which has ultimate control over the West Bank, are building. Mr. Abbas, who oversees a governing system plagued by corruption and dysfunction, has lost support among the Palestinian people.

He has weakened government institutions that are essential for a future state and refused to call new elections, thus overstaying his term by many years and preventing younger leaders from emerging.

He has also failed to unify the Palestinians in the West Bank, where his Fatah faction dominates, with those in the even more desperate circumstances of the Gaza Strip, where Hamas holds sway.

Even in this gloomy climate, however, Mr. Abbas’s vile speech was a new low. No doubt he feels embittered and besieged on all sides. But by succumbing to such dark, corrosive instincts he showed that it is time for him to leave office.

Palestinians need a leader with energy, integrity and vision, one who might have a better chance of achieving Palestinian independence and enabling both peoples to live in peace.

Correction: May 3, 2018
An earlier version of this editorial misidentified the signers of the Oslo Accords in 1993. They were Mahmoud Abbas, who was the foreign policy aide for the Palestine Liberation Organization at the time, and Shimon Peres, who was then the foreign minister of Israel. The Palestinian leader Yasir Arafat and Prime Minister Yitzhak Rabin of Israel attended the ceremony but did not sign the pact.