Does the media really understand the Gaza violence?

Published Wednesday May 16, 2018
from Honestreporting 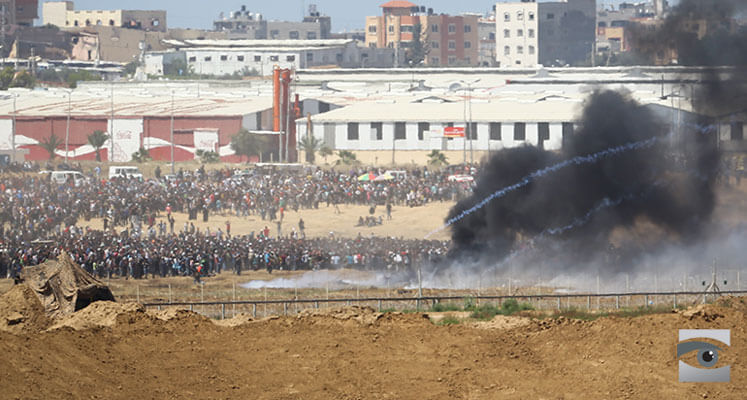 Following scenes of violence at the Gaza border on Monday, Israel now stands accused by its critics of various crimes against the Palestinian people.

For the Hamas terrorist organization, it was always likely to be a win-win situation. Succeed in overwhelming Israeli military forces by breaching the Gaza security fence enabling Palestinian terrorists to carry out attacks against Israelis is a win. Failing that, scenes of carnage bringing the world’s opprobrium on Israel would be a public relations victory enabled by a willing media.

It appears that the latter scenario has been achieved in blood by Hamas and its supporters.

Facebook posts in Arabic (translated here) made it crystal clear what Hamas intended: 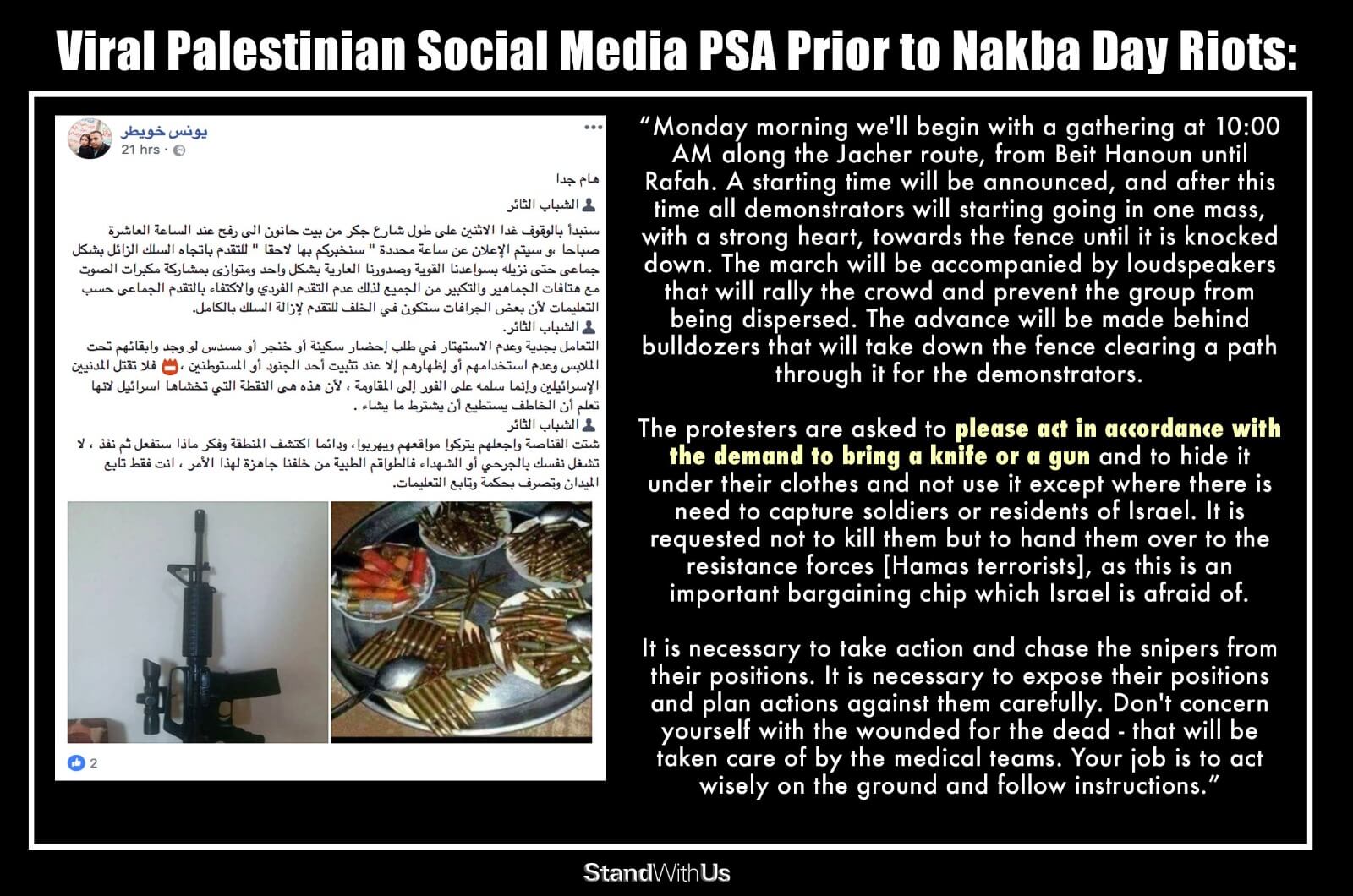 Given this scenario, which media covered events in a fair way and which  jumped on the bandwagon of condemnation?

For weeks, the Gaza border protests, despite evidence to the contrary, were framed as peaceful demonstrations in the image of icons such as Gandhi and Martin Luther King.

The reality as reported in the Washington Post was quite different:

But the protests appeared to have a more violent edge than in previous weeks. Some young men brought knives and fence cutters. At a gathering point east of Gaza City, organizers urged protesters over loudspeakers to burst through the fence, telling them Israeli soldiers were fleeing their positions, even as they were reinforcing them.

While some said they would abide by official calls to keep the demonstrations peaceful, others talked about their enthusiasm to break into Israel and wreak havoc.

“We are excited to storm and get inside,” said 23-year-old Mohammed Mansoura. When asked what he would do inside Israel, he said, “Whatever is possible, to kill, throw stones.”

Two other young men carried large knives and said they wanted to kill Jews on the other side of the fence.

The vast majority of demonstrators were unarmed, but near a parking area, a man pulled out an AK-47 and took aim at an Israeli drone dropping leaflets. He let off a stream of bullets into the air and brought it down. Later, more gunfire was heard as Palestinian factions argued over who would keep the downed drown [sic], onlookers said.

Despite plenty of evidence of a serious threat to Israeli security and the lives of Israeli civilians located in communities only meters away from the Gaza border, a staff-ed (which reflects the views of a media outlet’s editorial board) in The Guardianfailed to acknowledge this, instead placing the entire blame on Israel:

It is inexcusable for soldiers of a military, especially those under democratic civilian control, to shoot and kill protesters, almost all of whom were unarmed, and who pose no credible threat. Yet at the boundary between Gaza and Israel today Israeli soldiers seem to have done just that. It should make Israelis quail that demonstrators were sprayed with live ammunition with apparent impunity. There were dozens of deaths and hundreds of maimings among the Palestinians who had marched to the border to make a point about their right to return to their ancestral homes. Israel’s army evinced no shame in committing what looks like a war crime.

And The Guardian didn’t even mention Hamas once in its editorial. How is it even possible to comment on these events without even a reference to Gaza’s terrorist rulers? No mention of the terrorist organization that has hijacked the Palestinian protests for its own ends?

At least The Daily Telegraph‘s staff-ed recognized the reality of the situation Israel found itself forced into:

The loss of life is appalling, but Israeli soldiers found themselves trying to prevent thousands of demonstrators from breaking through the border, egged on by Hamas. Had they got through, there could have been even greater carnage.

Writing in the Daily Mail, columnist Mark Almond also recognized the threat that The Guardian failed to acknowledge:

But there are two crucial considerations to bear in mind about the Israeli response. First of all, one of the central themes of the radical Palestinian movement is to reclaim former homelands that are now Israeli territory. It is a drive called ‘The Great March of Return.’

But, by its very nature, this would threaten the very existence of the state of Israel. Therefore the security forces feel that, however savage the consequences, they cannot allow thousands of protesters in a human wave to cross the border and squat in Israel.

Second, although most of the demonstrators are unarmed, some definitely were. Hamas’s cynical eagerness to exploit the discontent means that there are bound to be hardened terrorists in the crowd, carrying knives, guns, petrol bombs or even rocket launchers.

Furthermore, Israel’s Shin Bet security service issued a statement explaining how Hamas had directed its gunmen to hold back and wait for an opportunity that a breach in the fence might present:

There is a prohibition for Hamas operatives to approach the border, from a fear that they will be killed or captured by IDF troops, unless the security fence falls and then they must enter, armed, into Israel under the cover of the masses and carry out terror attacks.

That  Palestinian children were killed and injured in yesterday’s violence is both shocking and tragic. (AP quoted Hamas-affiliated Gaza health officials that six of the Palestinians killed by gunshots were minors.) That a baby is also among the dead, as a result of tear gas inhalation, is profoundly upsetting.

(UPDATE: A Gazan doctor told the Associated Press that the baby had a preexisting medical condition and that he did not believe her death was caused by tear gas.)

The media, however, failed to ask why Palestinian children were encouraged to attend an event that was inevitably going to end in violence and a risk to life.

For Hamas, the sacrifice of children is a bonus.

The US embassy move as a false catalyst for violence

Moving the date of the culmination of the “March of Return” forward by a day turned into a major PR coup for Hamas, which got exactly what it wanted from the media coverage.

It wasn’t only about piggybacking on the coverage of the official ceremony marking the move of the US Embassy to Jerusalem. Live reports featured split screens simultaneously showing Americans and Israelis celebrating along with scenes of violence from Gaza.

This created a false cause and effect linking the violence to the embassy move.

This also created an impression of Israeli and American insensitivity to the deaths that were occurring only a few miles away. 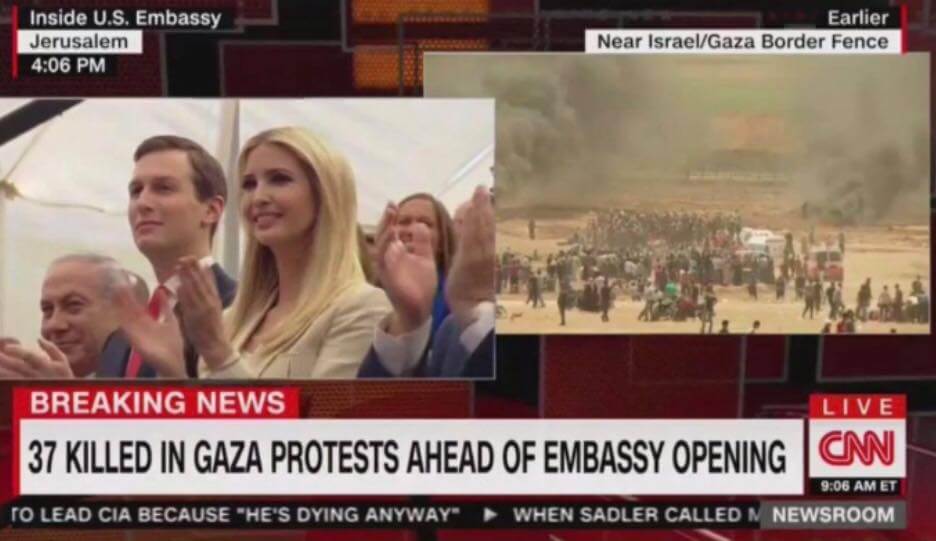 For some media and commentators, it was less about the genocidal aims of Hamas or even the demands of a “right of return” that fueled the violence. No, it was all about the embassy move.

Undoubtedly there were elements of the media opposed to any US President Trump policies, which manifested in blaming Trump above all along with the recognition of Jerusalem as Israel’s capital as the primary cause of the violence.

The New York Times‘s staff-ed made it perfectly clear who it held responsible:

Already dozens of people have died as a direct, immediate consequence of this high profile and highly provocative move.

At least the Wall Street Journal saw through this:

Violence marred the transfer of the U.S. Embassy in Israel to Jerusalem from Tel Aviv on Monday, but the ceremony was more excuse than cause. The Palestinians from Hamas who protested along the Gaza border with Israel were continuing their eternal war against the existence of the Jewish state more than they care about where America puts its diplomats.

While USA Today also tried to add some additional context: 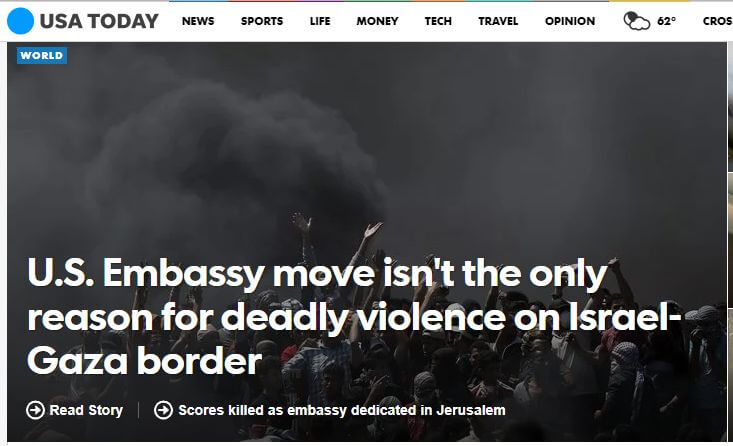 As for the US Embassy move itself, you can see more about the legalities behind it in this exclusive JPost video column by HonestReporting’s Senior Editor Daniel Pomerantz as well as an article in The Federalist.

Plenty of media failed to dig further into the causes of the violence beyond shallow analyses of the US Embassy move and symbolic Nakba Day protests. To his credit, Raf Sanchez of the Daily Telegraph did:

The demonstrations are a way of refocusing the world’s attention back on the Israeli-Palestinian conflict. Hamas hopes to pressure its international backers to once again rally to its cause. The Palestinian death toll has also drawn Western criticism of Israel – another win from Hamas’s perspective.

There is one other benefit that the protests bring to Hamas: they buy time.

Hamas is in a desperate situation, perhaps the lowest its been since it won Palestinian elections in 2006 and seized control of Gaza by force a year later. Anything it can do to buy time right now is welcome. The group wants to keep a lid on discontent in Gaza, hope that its external situation improves and, most importantly, live to fight another day.

As the flames of the burning tires die down and the black smoke clears from the air around the Gaza border, Israel faces a fresh assault – one it has seen on many an occasion – an assault on its legitimacy and its public image.