Why has Labour run the risk of alienating progressive Jews?

Published Monday July 9, 2018
from The guardian 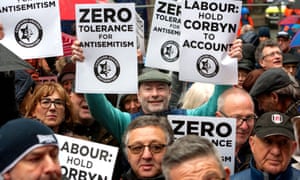 You catch it on the edge of a remark,” says Harold Abrahams of antisemitism in Chariots of Fire. Three decades on from its success at the 1982 Oscars, you should marvel at how “progressives” have progressed: antisemitism is no longer on the edge but at the centre of leftwing life.

To see how deep the rot has penetrated, imagine a racist police force – it isn’t hard to do. Imagine a chief constable had endorsed fantasists who say black men are natural criminals and Muslim men are paedophiles. Imagine, to the relief of everyone who thought the police should fight crime rather than race wars, the chief constable announces that there is “no place for racism in my force”. If the chief constable then wrote his own definition of racism and drew its terms so tightly that hardly any officer fell within it, no one would find his conversion convincing.

Rather than building a popular front to fight Trump and Brexit, Labour has taken it upon itself to reject the International Holocaust Remembrance Alliance’s definition of antisemitism. Don’t panic, the alliance isn’t a Jewish conspiracy. It states that “criticism of Israel similar to that levelled against any other country cannot be regarded as antisemitic”. Its working definition is accepted by thousands of public bodies. But not the British Labour party.

Labour dropped the alliance’s stipulation that it was racist to accuse Jewish citizens of having a greater loyalty to world Jewry than their own country, or to hold Israel to a higher standard than other democratic nations. The international definition implies that Ken Livingstone’s “Hitler was a Zionist” fake history or comparisons of Israel with Nazism are racist. Labour prefers to hide in a forest of equivocation. It is normal to draw metaphors from history, its Jewsplainers state. It is not antisemitic to use them “unless there is evidence of antisemitic intent”. As you can rarely look into another person’s soul and prove intent, I take that to mean Labour is giving many of its racists a free pass.

Its press officers assured me that the party wasn’t rigging the system. As they are good people wasting their lives working for compromised men and women, they must believe it. We do not. Recently departed Labour staffers describe as a “political project” the party’s decision to make Jews the only ethnic minority Labour denies the right to define the racism they face. Dissident leftists are already providing examples of the anti-Jewish hatred the new guidelines might allow. 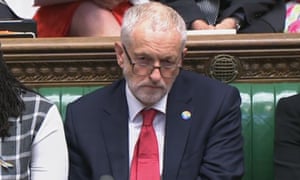 ‘Antisemitism is endemic among the political Islamists who back Jeremy Corbyn.’ Photograph: PA

To ask why Labour has chosen to alienate progressive Jews just days before a Trump visit that demands liberal-left unity is as futile as asking why it chooses to alienate opponents of Brexit as the Tories lead the country into chaos. Understand that its leaders care only about the creation of a new extremist party, and you know all you need to know. From Labour’s point of view, the toleration of antisemitism is in its interests. Just as Viktor Orbán can target Muslim refugees as there are hardly any Muslims in Hungary, so Labour faces few electoral costs from baiting Britain’s tiny Jewish minority. Labour now needs the Muslim vote, and antisemitic prejudice is higher among Muslims than the general population. Although it is false to say all Muslims are antisemites, it is true to point out that antisemitism is endemic among the political Islamists who back Corbyn. His other “base” is among former Stalinists from the old Communist party and Trotskyists from the remnants of Militant and the Socialist Workers party. Stalinists and Trotskyists once hated each other (Stalinists spent a part of the early 20th century murdering Trotskyists, after all.) . Neither has anything in common with Islamists, whose theocratic dreams could not be further from Stalin’s and Trotsky’s utopias.

All three are united by conspiracy theory, however. And all conspiracies go back to Jews in the end. Antisemitism isn’t like other racisms. There’s almost a note of envy in it. Ordinary racisms hate the foreign “other”. The prejudice is bound up with notions of filth and promiscuity – as shown by the picture of the refugee as rapist painted by today’s far right.

By contrast, 20th-century fascists thought the Jews so brilliantly cunning they could be behind both capitalism and communism simultaneously. Their successors find them responsible for everything from 9/11 to the Salisbury chemical weapons attack. It ought to be notorious that antisemitism is an anti-democratic project built on almost two millennia of religious prejudice. The Tsarists and fascists used it to dismiss human rights and free elections as tricks the Jews used to hide their secret power. The old Marxist-Leninists who surround Corbyn were not so different. They also believed human rights and democracy were shams – only in this instance they hid the machinations of corporate capitalism. It’s only a small leap to say the capitalists are Jews – or “Rothschilds” as Corbyn’s supporters so tellingly call them – and you have reached the other side.

Whenever you raise leftwing racism, Labour activists accuse you of repeating Tory smears. You reply that politicians always smear their opponents: what matters is whether the accusation is true. They say: “Jeremy’s words have been taken out of context.” You show they have not. They say: “But what about right-wing Islamophobia?” You reply that a true anti-racist would fight both. That used to silence them. But now they will be able to produce the conclusive rejoinder that Labour has investigated and found to its relief and delight that antisemites barely exist.

• Nick Cohen is an Observer columnist