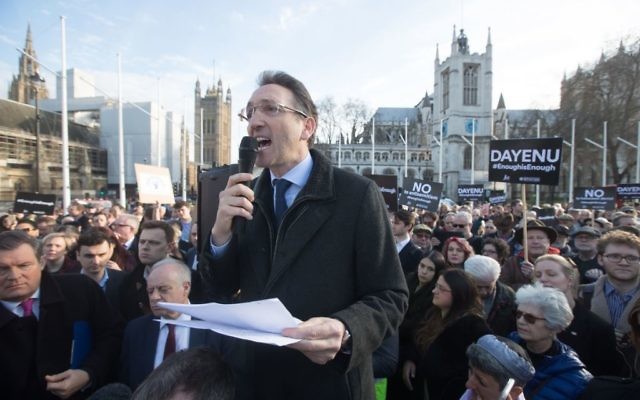 A Jewish community leader has said Jeremy Corbyn is “not fit to be a member of parliament”, as questions were raised for the first time about whether relations with Corbyn had reached point of no return.

His comments come amid claims that photographs showed him holding a wreath near the graves of those responsible for the massacre of Israeli athletes at the 1972 Munich Olympics.

The 2014 visit hit the headlines during last year’s general election campaign, when Labour said that Mr Corbyn had been paying his respects at a memorial to those killed by an Israeli air strike on Palestine Liberation Organisation offices in Tunis in 1985.

But the Daily Mail said that its own visit to the Martyrs Ceremony had shown that the memorial was 15 yards away from the spot where Mr Corbyn was pictured holding a wreath, in photographs held in the Palestinian Embassy website archive.

The newspaper said that the pictures were taken in front of a plaque honouring three men, including the founder of the Black September organisation which carried out the Munich atrocity and yards from the grave of PLO intelligence chief Atef Bseiso.

Jonathan Goldstein, Chair of Jewish Leadership Council said: “The revelation in yesterday’s Daily Mail that Jeremy Corbyn laid a wreath at the graves of the perpetrators of the 1972 Munich Massacre is despicable. It is reprehensible that the man who wishes to be our Prime Minister honoured ruthless terrorists who committed an act described by the late King Hussein of Jordan as “a savage crime against humanity”.”

“This man is not fit to be a member of parliament, let alone a national leader.  He has spent his entire political career cavorting  with conspiracy theorists, terrorists and revolutionaries who seek to undo all the good for which our ancestors have given their lives. In so many ways, Enough is Enough”.

One communal source said: “Jonathan Goldstein’s statement goes further than any leader has before. It reflects a feeling that we may have reached the point of no return in relations between the community and Corbyn. His inability to face up honestly to his past and his role in the current sorry state of affairs in his party makes it very hard to see a way back”.

The president of the Board of Deputies of British Jews, Marie van der Zyl said: “If true, reports of Jeremy Corbyn honouring terrorists at a memorial service are chillingly revealing .You are judged by the company you keep. It represents yet another moral failure from the Labour Leader and raises questions about his credibility.”

The director of Labour Friends of Israel, Jennifer Gerber, told the Mail: “It beggars belief that anyone would wish to honour the terrorists behind the brutal massacre of 11 Israeli athletes at Munich.

“However, it is sadly utterly unsurprising that Jeremy Corbyn appears to have done so.”

“And I was accompanied by very many other people who were at a conference searching for peace.”

The pictures emerged amid continuing controversy over Labour’s refusal to adopt in full the anti-Semitism definition drawn up by the International Holocaust Remembrance Alliance (IHRA), along with its list of examples of anti-Semitic behaviour.

Labour’s former Cabinet minister Jim Murphy took out a full-page advert in the Jewish Telegraph to offer an apology to British Jews and to accuse Mr Corbyn of failing to do enough to throw anti-Semites out of his party.

Mr Murphy, who led Labour in Scotland from 2014-15, said the party’s leadership had shown itself to be “intellectually arrogant, emotionally inept and politically maladroit” over allegations of anti-Semitism.

And he said: “Jeremy Corbyn is not doing nearly enough to throw out the anti-Semites found within grassroots and online Labour.”

Mr Murphy’s dramatic intervention increased pressure on Mr Corbyn and Labour’s National Executive Committee to reconsider the code of conduct on anti-Semitism agreed last month, which omits four of the IHRA examples from its own list of unacceptable behaviours.

Labour argues that the items – mostly dealing with criticisms of the state of Israel – are covered elsewhere in the document in a way which will make it easier to take disciplinary action.

But the boss of public sector union – and major Labour donor – Unison has added his voice to calls for the IHRA definition to be adopted in full.

General secretary Dave Prentis said that “putting the issue of Labour and anti-Semitism to bed as quickly as possible” was “critical” to the party’s efforts to win power at the next election.

The issue was costing Labour votes and harming its relationship with the Jewish community, said Mr Prentis in an article on the New Statesman website.

But he added: “It isn’t too late for the party to chart a different course and begin repairing that damage, as Jeremy Corbyn is clearly attempting to do.

“Anti-Semitism in Labour didn’t start under Jeremy, but I am confident that under his leadership it can be dealt with once and for all.”

Meanwhile, an anonymous Twitter feed called The Golem published video of Mr Corbyn in 2013 comparing the plight of Palestinians with people under Nazi occupation during the Second World War.

He said the West Bank was “under occupation of the very sort that would be recognised by many people in Europe who suffered occupation during the Second World War, with the endless road blocks, imprisonment, irrational behaviour by the military and the police”.

Labour Friends of Israel, which campaigns for a two-state solution, called the comments “appalling”.

But a Labour Party spokesman said: “Jeremy was describing conditions of occupations in World War Two in Europe, of which there are multiple examples, not comparing the Israeli State to Nazis.”