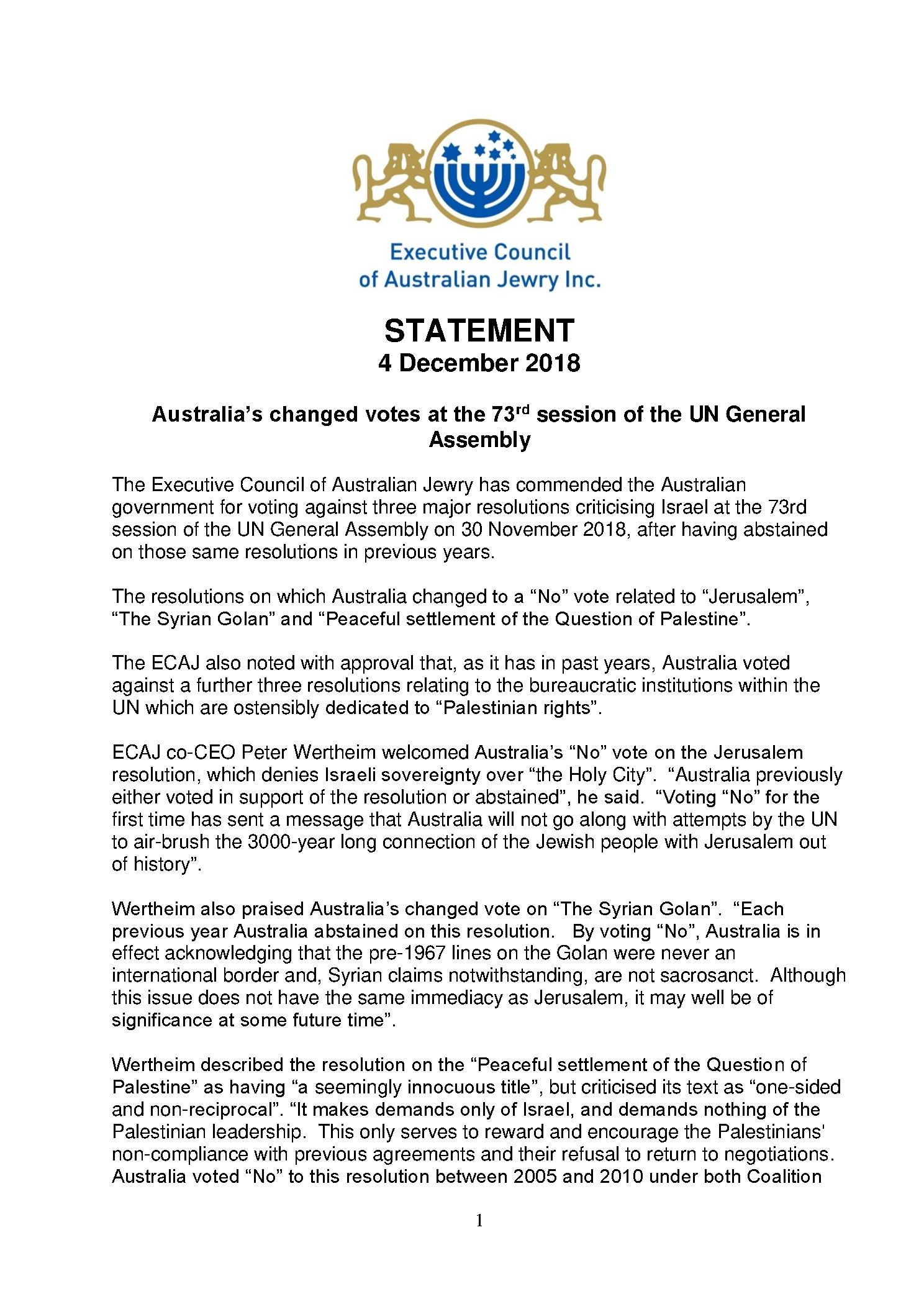 The resolutions on which Australia changed to a “No” vote related to “Jerusalem”, “The Syrian Golan” and “Peaceful settlement of the Question of Palestine”.
The ECAJ also noted with approval that, as it has in past years, Australia voted against a further three resolutions relating to the bureaucratic institutions within the UN which are ostensibly dedicated to “Palestinian rights”.

ECAJ co-CEO Peter Wertheim welcomed Australia’s “No” vote on the Jerusalem resolution, which denies Israeli sovereignty over “the Holy City”. “Australia previously either voted in support of the resolution or abstained”, he said. “Voting “No” for the first time has sent a message that Australia will not go along with attempts by the UN to air-brush the 3000-year long connection of the Jewish people with Jerusalem out of history”.

Wertheim also praised Australia’s changed vote on “The Syrian Golan”. “Each previous year Australia abstained on this resolution. By voting “No”, Australia is in effect acknowledging that the pre-1967 lines on the Golan were never an international border and, Syrian claims notwithstanding, are not sacrosanct. Although this issue does not have the same immediacy as Jerusalem, it may well be of significance at some future time”.

Wertheim described the resolution on the “Peaceful settlement of the Question of Palestine” as having “a seemingly innocuous title”, but criticised its text as “one-sided and non-reciprocal”. “It makes demands only of Israel, and demands nothing of the Palestinian leadership. This only serves to reward and encourage the Palestinians' non-compliance with previous agreements and their refusal to return to negotiations.

Australia voted “No” to this resolution between 2005 and 2010 under both Coalitionand Labor governments, before changing its vote to “Abstain”. Australia’s return to a negative vote on this resolution is soundly-based”.

Wertheim said he was “unfazed” by the fact that all of these resolutions were passed by very large majorities. “Australia’s longest-serving Foreign Minister, Alexander Downer, said that just because you are in the minority it doesn't mean you are wrong. Populism is often nonsense”. Wertheim added that he was looking forward to Australia voting to support a US-backed resolution condemning Hamas in the UN on Thursday.

“Taken together”, Wertheim said “Australia’s votes on these resolutions send a clear message to the UN that the Australian government will not be a part of the annual ritual whereby the dictatorships and semi-dictatorships who comprise the majority of UN member states sit in judgement against the only liberal democracy in the Middle East. By focusing repetitively and disproportionately on Israel, the resolutions effectively give a leave pass to the intransigence and extremism of the other actors in the region which remain hostile to Israel’s very existence”.

“Such an approach has demonstrated its futility many times”, Wertheim continued. “It has hardened public opinion among both Israelis and Palestinians against making the painful concessions that peace will ultimately require from both sides, and achieving a just and lasting resolution of the conflict based on the principle of two States for two peoples – Israel as the State of the Jewish people living in peace side by side with a Palestinian State”.
Contact:
Peter Wertheim AM | co-CEO
phone: 02 8353 8500 | m: 0408 160 904 | fax 02 9361 5888
e: pwertheim@ecaj.org.au | www.ecaj.org.au