by WSJ Editorial Board 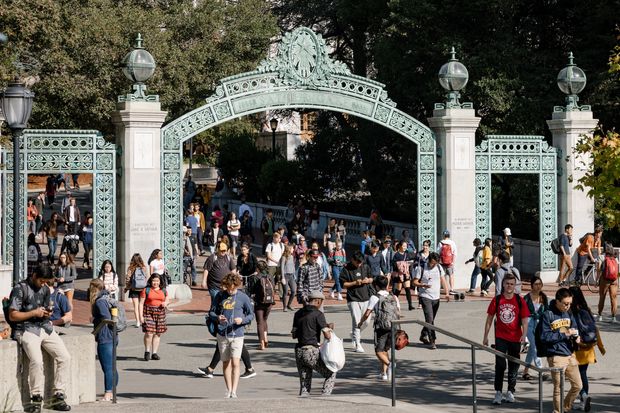 Students at Sproul Plaza at the University of California at Berkeley in Berkeley, Calif., Oct. 26.. Photo: Jason Henry for The Wall Street Journal

The University of California at Berkeley reached a settlement Monday with campus conservative groups who had sued over its speaker policy. This agreement helps conclude an ugly chapter in the university’s history and goes a long way toward restoring its free-speech reputation.

After much-publicized controversies involving protests and controversial speakers, the College Republicans and Young America’s Foundation sued Berkeley in April 2017. They claimed the university was relying on an “unwritten and unpublished policy” that gave administrators broad discretion to "restrict the time, place, and manner of any campus event involving ‘high-profile speakers,’” including on the basis of the speaker’s viewpoint. Their main concern was that administrators would impose security restrictions or fees so extreme that they would reinforce the heckler’s veto.

We’ve seen no hard proof that a secret policy existed. But it’s fairly obvious why these conservatives feared Berkeley wouldn’t have the guts to protect their rights. The chancellor’s office installed a $9,000 emergency exit for staffers to escape disruptive demonstrators. And the university hit rock bottom in February 2017, when it cancelled a speech by Milo Yiannopoulos after masked agitators threw Molotov cocktails and caused $100,000 of damage.

Carol Christ became chancellor in July 2017, and unlike predecessor Nicholas Dirks she has refused to reward protestors’ threats and antics. Last fall she spent $600,000 on security to ensure Ben Shapiro could speak unimpeded. Berkeley has since hosted Heather Mac Donald, Charlie Kirk, Candace Owens, Rick Santorum, Dennis Prager and other conservatives— at no cost to the student groups who invited them.

In Monday’s settlement, Berkeley reaffirms that it won’t consider a speaker’s viewpoint in deciding on the time, date, place or security for an event. Students can host speakers for free in classrooms or student government-run facilities. And if student organizations choose to use auditoriums or bigger campus venues, security costs will be determined based on criteria listed in a newly published fee schedule.

The settlement sets the expectation that Berkeley will treat speakers and students equitably and transparently. Even better, it sends a message that protestors can’t use the threat of mayhem to price Berkeley’s conservatives out of exercising their First Amendment rights.