69 years after joining, Israel formally leaves UNESCO; so too, does the US

UN cultural agency’s efforts to convince Washington and Jerusalem fail; ‘we aren’t going to be a member of an organization that deliberately acts against us,’ Israeli envoy says 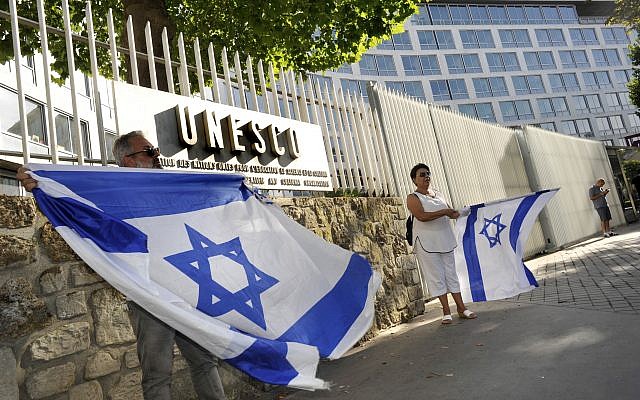 French Jews hold Israeli flags, as they take part at a demonstration against UNESCO, near the cultural agency's Paris headquarters, July 17, 2017. (Serge Attal/Flash90)

As the new year began, Israel officially left the United Nations Educational, Scientific and Cultural Organization, despite recent efforts by the agency’s head to combat its politicization and alleged anti-Israel bias.

The withdrawal went into effect at midnight Paris time (1 a.m. in Israel). The US departure also took effect at the same time.

“UNESCO is a body that continually rewrites history, including by erasing the Jewish connection to Jerusalem,” Israel’s Ambassador to the UN Danny Danon told The Times of Israel on Monday.

“It is corrupted and manipulated by Israel’s enemies, and continually singles out the only Jewish state for condemnation. We are not going to be a member of an organization that deliberately acts against us.”

In October 2017, mere days after the US administration announced its withdrawal from UNESCO due to, among other things, its alleged obsession with Israel, Prime Minister Benjamin Netanyahu declared that he was following the US lead.

“We hope that the organization will change its ways but we are not pinning hopes on this; therefore, my directive to leave the organization stands and we will move forward to carry it out,” he declared a few days later.

Israel had joined UNESCO on September 16, 1949, and is home to six UNESCO World Heritage Sites, including Masada, the Old City of Acre, the Bahai Temples in Haifa and the “White City” of Tel Aviv. These sites will remain on the list, a spokesperson for the Foreign Ministry in Jerusalem said.

Jerusalem and Washington ignored strenuous efforts by the agency’s new director-general, Audrey Azoulay, to get both countries to reconsider, including brokering compromises that saw anti-Israel resolutions delayed or softened.

In October, for instance, the agency’s Executive Board passed two decisions critical of Israel, but did it in a way meant to answer some of Jerusalem’s concerns.

The cultural agency celebrated the move as a sign of “goodwill,” but Danon still slammed it as further proof of the organization’s “lies and biases” against the Jewish state.

The two texts on “Occupied Palestine” sharply criticized Israel — called the “occupying power” throughout — for various policies vis-a-vis the Palestinians. For instance, Decision 28 deeply “deplores the ongoing military developments around the Gaza Strip and their heavy toll of civilian casualties,” and refers to the Tomb of the Patriarchs in the Old City of Hebron “an integral part of the Occupied Palestinian Territory.”

Decision 29 said UNESCO’s Executive Board is deeply “concerned by the Israeli army violations against Palestinian universities and schools” and referred to the Golan Heights as occupied Syrian territory.

However, rather than put them before a contentious vote that would still have ended with their approval, UNESCO instead shuffled the texts into a non-binding annex which was approved by consensus, a process that Israel has cheered in the past as a diplomatic achievement.

In April, after two resolutions were accepted in the same way as part of a compromise solution, Israel’s ambassador to UNESCO said the mood was “like a wedding.”

Azoulay — who took over UNESCO’s helm in October 2017, mere hours after the US and Israel announced their withdrawal from the organization — hailed “the spirit of dialogue and the sense of responsibility,” speaking of a  “trend towards consensus… and goodwill.”

In April 2017, Israel’s then-ambassador to UNESCO, Carmel Shama Hacohen, celebrated the arrangement to pass anti-Israel resolutions in non-binding annexes without a vote as a major achievement in the Jewish state’s battle against the automatic Arab majority in international bodies. 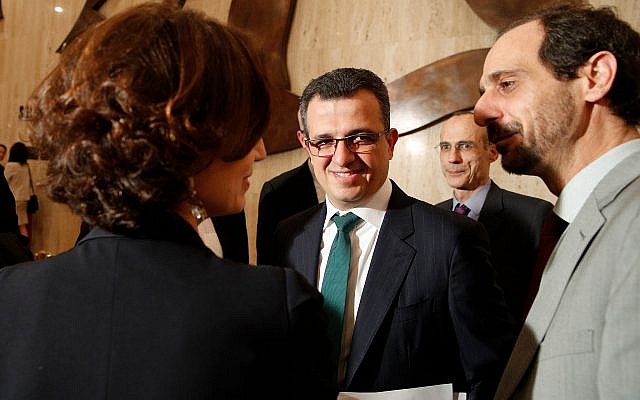 “I’m more than happy” with the outcome, he said at the time.

Shama Hacohen has since left Paris and was elected mayor of Ramat Gan. He was replaced by a career diplomat.

In September, Netanyahu considered attending a UNESCO event and meeting Azoulay at the UN General Assembly New York, but then surprisingly turned down the invitation, citing the agency’s “persistent and egregious bias against Israel.”

According to reports, Netanyahu backed out of the event because he did not want to anger the US, which has taken a hard line with UNESCO.

The State Department couldn’t comment on the US withdrawal Monday because of the UA government shutdown. Earlier, the department told UNESCO officials the US intends to stay engaged at UNESCO as a non-member “observer state” on “non-politicized” issues, including the protection of World Heritage sites, advocating for press freedoms and promoting scientific collaboration and education.

The US could potentially seek that status during UNESCO Executive Board meetings in April.

The United States has pulled out of UNESCO before. The Reagan administration did so in 1984 because it viewed the agency as mismanaged, corrupt and used to advance Soviet interests. The US rejoined in 2003.