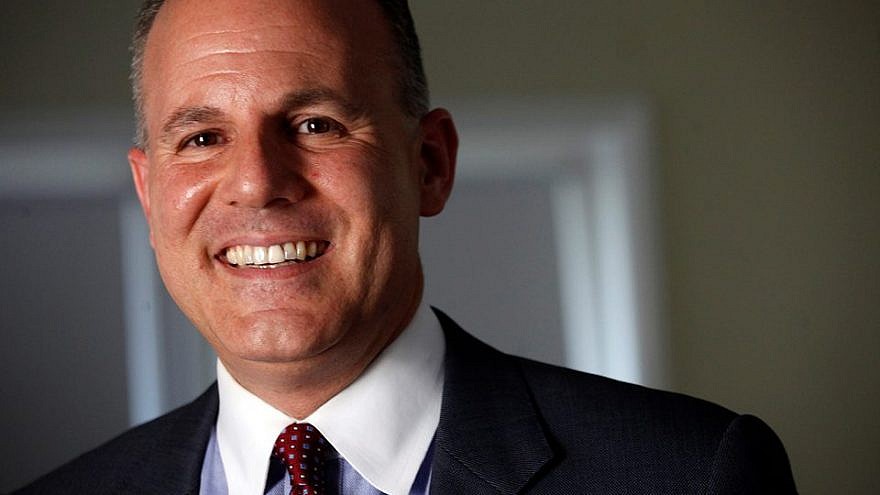 (February 4, 2019 / JNS) After a 21-month-long vacancy awaiting the appointment of the U.S. State Department’s Special Envoy to Monitor and Combat Anti-Semitism, the Trump administration has picked Iraq War veteran and attorney Elan Carr to fill the position.

“I hope I make the difference. At the end of the day, all that matters are results and impact,” Carr told JNS. “And that’s what I pray—that I should have an impact on this terrible [problem]."

Carr, 50, arrived in Baghdad in October 2003 and served as an anti-terrorism officer in a unit under U.S. Central Command.

He participated in Jewish life in the army, including having a Passover seder to leading Friday-night Shabbat services to lighting the Hanukkah menorah in the former palace of Iraqi leader Saddam Hussein. It was there that Carr’s grandfather sat behind bars in 1948 for five years in response to Israel’s founding; he was convicted on a fabricated charge of disseminating Communist propaganda and calling Muslim witnesses “liars,” according to his grandson.

“My mother remembers him coming to the door with shaving cream on his face when they arrested him,” Carr told The Times of Israel in 2013, adding that she “remembers vividly the hysteria.”

In 1950, while in prison, the rest of the family moved to Israel, where Carr’s father eventually joined them. There, Carr’s mother underwent army service in intelligence, followed by studying for a graduate degree in Middle Eastern and Islamic studies in New York City, where she met her husband.

Carr grew up in New York and was educated at a Jewish day school, traveling to Israel annually.

However, he has recognized the Alpha Epsilon Pi chapter at the University of California, Berkeley, for helping to shape his Jewish identity.

“To be part of an organization that is profoundly connected to Jewish nationhood, the brotherhood of Am Yisrael [‘the Jewish people’], is eye-opening, awakening,” he told The Times of Israel.

After graduation, he earned a law degree from Northwestern University. Carr then practiced litigation at a prominent New York law firm and, in the 1990s, assisted in creating Israel’s initial public defender’s office.

In Iraq, where he served until 2004, along with analyzing threats and recommending actions, Carr served as a judge advocate in the American military’s judicial system, prosecuting enemy combatants before Iraqi judges at the Central Criminal Court.

Since returning to the United States from Iraq, Carr served as a criminal gang prosecutor with the Los Angeles County Deputy District Attorney’s office.

Carr, a Republican, unsuccessfully ran for Congress in 2014 against Democratic Rep. Ted Lieu.

He lives in L.A. with his wife and two daughters.

‘He understands the history, as well as the challenges’

The Special Envoy to Monitor and Combat Anti-Semitism is not subject to Senate confirmation, as it is not an ambassador-level position.

However, the U.S. House of Representatives passed a bipartisan bill last month that would elevate the status of the position to that of an ambassador, thereby requiring Senate confirmation.

Rep. Chris Smith (R-N.J.), who introduced the measure, did not respond to a request for comment on Carr’s appointment.

“Elan Carr is a very good choice. He has been devoted to the issues relating to anti-Semitism for many years,” Malcolm Hoenlein, executive vice chairman of the Conference of Presidents of Major American Jewish Organizations, told JNS. “He understands the history, as well as the current challenges. I am confident he will work assiduously to address the rising tide of anti-Semitism abroad.”

“There is mounting evidence of increased anti-Semitism coming both from the right and the left. Today, there is growing political, as well as social, anti-Semitism that reflects the overall growth of anti-Semitism in Europe,” continued Hoenlein. “We in the United States need to watch these patterns carefully, and learn from past and current experiences in Europe to fight anti-Semitism effectively.”

“There’s probably nobody better on the planet than him for this post. His lifelong commitment to serving both the United States and the Jewish people is legendary. He is a committed Jew and pro-Israel advocate, and is smart as a whip. He is an extremely successful prosecutor,” said Borans.

“We offer our heartfelt congratulations to Elan Carr, a close friend of the Israeli-American Council, as he steps into his crucial role,” said IAC CEO Shoham Nicolet. “This appointment is an important milestone for our community, and we stand behind [Carr] in his role defending not only the Jewish people, but also the values of America and the free world.”