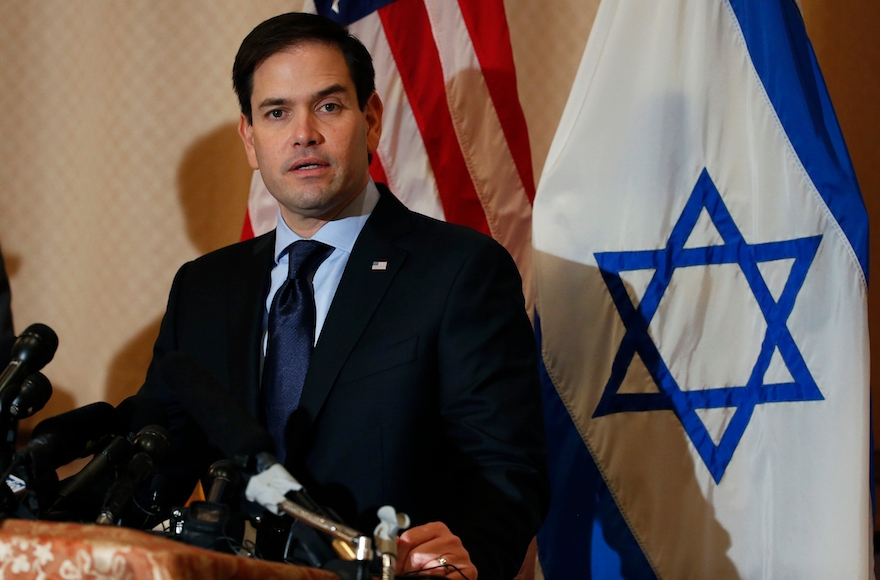 Marco Rubio speaking at a press conference about Israel at a synagogue in West Palm Beach, Florida, March 11, 2106. He championed the bill against Democratic opposition. (Rhona Wise/AFP/Getty Images)

WASHINGTON (JTA) — The U.S. Senate approved in a 77-23 vote a bill that codifies $38 billion in defense assistance to Israel and which provides legal cover to states that target the boycott Israel movement.

The bill, sponsored by Sens. Marco Rubio, R-Fla., and Joe Manchin, D-W. Va., had stirred controversy because a number of Democratic senators said that while they oppose the Boycott, Divestment and Sanctions movement targeting Israel, they were also concerned that state laws aimed at BDS impinged on speech freedoms.

Among the Democratic dissenters were declared presidential candidates like Elizabeth Warren of Massachusetts, Kirsten Gillibrand of New York, Cory Booker of New Jersey and Kamala Harris of California. Non-declared but likely presidential contenders who voted included Bernie Sanders of Vermont and Sherrod Brown of Ohio who voted against; and Amy Klobuchar of Minnesota who voted for. The sole Republican voting against was Rand Paul of Kentucky.

The bill now goes to the U.S. House of Representatives where the Democratic majority will break it up into its components, and its leadership is likely to bury the anti-BDS section while advancing the other components.

In addition to the money for Israel and the proposed anti-BDS laws, the bill intensifies sanctions on Syria’s Assad government and reinforces ties with Jordan.

The American Israel Public Affairs Committee praised the Senate for passing the bill and defended the anti-BDS component and urged the House to bass all the bill’s provisions. “The legislation has no impact on the right of Americans to personally boycott Israel or oppose Israeli policies,” AIPAC said. “The bill’s scope is limited to commercial activities between companies and state and local governments.”

The American Civil Liberties Union complained that “the Senate chose politics over the Constitution and trampled on the First Amendment rights of all Americans.”