Thanks to Ilhan Omar, U.S. Jews Just Got Their Jeremy Corbyn Moment 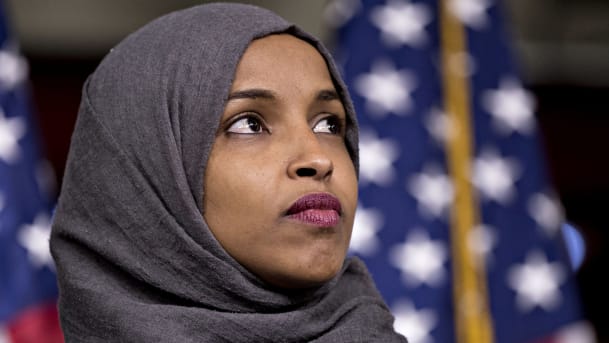 One would have to be either totally ignorant of history, blinded by dogma, or likely both, to see the six-word-tweet-plus-emoji of US Congresswoman Ilhan Omar on Sunday night (on U.S. support for Israel, "It's all about the Benjamins,") as anything else than what it was: the blatant use of the centuries-old accusation against all Jews, everywhere, all the time, that they use their money to undermine entire nations.

No one can say with any good faith it was anything else, but plenty, of course, are already trying.

And just like that, the nasty specter of a popular progressive politician, embroiled in anti-Semitism, a situation which British Jews have known only too well for the last three years, has jumped over the Atlantic. American Jews now have their very own Jeremy Corbyn moment.

Jeremy Corbyn, leader of the U.K's opposition Labour Party, leaves the polling station after casting his vote in the local elections in London, U.K. May 3, 2018Bloomberg

Of course there are differences. Corbyn is the leader of the opposition and potentially Britain's next prime minister. Omar is a freshman Member of Congress. Some have also  pointed out that her tweet has gone way beyond anything Corbyn has uttered in recent years. Both points are valid, though Corbyn said similar things in his more distant backbencher past. More importantly, the dynamics in the hours immediately following the poisonous tweet were so drearily similar - and a sign of things to come.

Just as in Corbyn's case, this isn't about what the politician actually believes in his or her heart, though Omar, like Corbyn has a previous record of using anti-Semitic themes. It isn't even just about what they say. It's about the normalizing of an atmosphere in which such sentiments are accepted.

And when a politician's supporters rush to excuse their every word, as is the case in the UK since Corbyn's election leader of the Labour Party in 2015, just as Omar's supporters have piled on social over the last few hours, such an atmosphere is normalized.

It's important to note that this atmosphere didn't emerge in the US overnight. After all, for the past two years, the leadership of the progressive left's Women's March has been doing everything possible to make Jewish women unwelcome in its ranks.

We are seeing all the identical standard justifications being produced. Just as Corbyn portrays himself as someone who has "fought racism all his life," Omar, a Somali-born refugee, is presented as a frequent target of racism (which she is). Therefore both are to be believed to be immune from anti-Semitism in word, deed or thought.

Whataboutism is working double-shifts as Omar's defenders, just like Corbyn's, are screaming that racism is much worse on the right (which in Donald Trump's America, at least, is probably right as well). And then of course there is the criticizing-Israel-is-not-anti-Semitism line. And by extent, the accusations, so sadly familiar now to British Jews, that anyone who dares criticizing Omar is actually a stooge of Israel, intent on "smearing" her. Naturally, the right-wing in the U.S. is having a hypocritical field-day. And why not?

But where are American Jews in all this? The vast majority of U.S. Jews support Omar's Democratic Party and see in it their political home. And they've suffered a terrifying rise in the levels of attacks over the last two year from racists emboldened by President Trump, culminating in the murder of 11 in a Pittsburgh synagogue.

Some U.S. Jews are loudly denouncing Omar. A few are supporting her. Many are simply hoping this was an aberration, and that the an inexperienced Congresswoman will swiftly apologize and realize her error. That seems increasingly unlikely. So far, she's doubled down on her tweet and is being feted in her Twitter echo-chamber for having the guts to "stand up to the lobby."

It will be much more difficult for American Jews to confront this moment than it was for their UK brothers and sisters.

For a start, there is nothing in the U.S. like the relatively centralized and more-or-less mainstream representation that British Jews have in Britain, in the shape of the Board of Deputies and Jewish Leadership Council, to articulate the views of the majority of Jews (not that the Board or the JLC by any means speak for all Jews, but they have, by and large, succeeded in speaking for most of the community throughout the Corbyn fracas).

The other difficulty facing American Jews now is that in Britain, Corbyn himself and many of his cronies are aging white men, and a lot of the Corbynist anti-Semitism has come with large doses of misogyny, directed primarily at the Jewish women who are Labour MPs, and who are on the frontline of confronting anti-Semitism in Britain.

In the U.S., with its intersectionalized identity politics, anti-Semitism has become inextricably mixed up with other issues on race, with Jews being cast as the rich white oppressors, while many of their critics, like Omar, are young women of color, who are themselves facing racist attacks in other forms. This is one reason that it will be harder to push back against anti-Semitism from the U.S. left.

The other is the political-demographic complexion of the Jewish community itself. In Britain, the pro-Corbyn Jewish faction is a small, shrinking and largely inconsequential minority within British Jewry, few of whom have had any relationship with the organized community.

In the U.S., there is a much larger group of young Jews, active members of their communities, with strong left-wing tendencies and who for the best reasons in the world will want to continue seeing in Omar and similar voices as "allies." This group will be much more numerous, and younger, than its British peers, and the waters will be muddier.

Just like young Jewish supporters of Corbyn back in 2015, those young would-be Omar fans will likely take one of three paths. Some will gradually recognize anti-Semitism for what it is, become disillusioned with its proponents, and try to find new spaces on the left.

Others will cling forlornly to the belief that use of old Judeophobic tropes is just a result of their heroes' ignorance and they can get those heroes to "educate themselves on anti-Semitism," just as some in Labour hoped Corbyn would do.

And there will be those who continue convincing themselves that it's all Israel's fault; the experience of anti-Semitism will actually reinforce their anti-Zionist convictions. That has the potential for major disruption within the U.S. Jewish community.

But without a doubt the most negative, or problematic, factor for American Jews is that Omar is a strong and authentic voice confronting the accelerating racism coming from Trump and his outriders on the far right. British Jews have to face right-wing racism as well, but nothing of that order and certainly not from within the government. Calling out someone like Omar, and her fans, for racism, is that much more difficult when American Jews are already under threat from the other side of the political aisle.

When it comes to anti-Semitism there should be no sides. Left-wing Jews who instinctively rush to protect their political ally, Omar, should bear in mind that doing so, they're behaving no differently from other Jews who seek to protect Trump and other racist politicians, like Hungary's Viktor Orban and Brazil's Jair Bolsonaro, just because they are "pro-Israel." Indeed they're no different to Jews who excuse Benjamin Netanyahu of his racist policies and propaganda, just because he's the prime minister of Israel.

But this isn't about the Jews really, or even about Israel. Corbyn and Omar are just place-holders for a much larger shift in Western politics, on the right and the left.

It's a populist shift towards more extreme politics and a general hostility towards the mainstream. And the hard left is not that different to Trump and the alt-right's base instincts.

They have the same love of dictators - both love Vladimir Putin, the left Nicolas Maduro, the right Bolsonaro. They share an aversion towards alliances of democratic nations like NATO and the European Union. They love online conspiracy theories and distrust the media. And they share an antipathy to Jews, whom the "anti-racist" radical left call "Zionists" and the hard right, which pretends to love Israel, they call "globalists" and George Soros.

It's not happening just in the U.S. and Britain. Take France as another example, where the yellow-vested rioters who hail from both ends of the political spectrum have indulged in anti-Semitic chanting and just this last weekend, vandalized a Jewish business in Paris.

We didn't need the joint Judeophobia from right and left of the gilets jaunes to show us how the opposite poles of French politics have drawn close when it comes to Jews.

In July 2017, when French President Emmanuel Macron accepted the French nation bore responsibility for deporting Jews to the death camps during the Vichy Regime, it wasn't only the far-right Front National which objected strongly, but also the leader of the radical left, Jean-Luc Melenchon, who said that Macron's statement was "totally unacceptable." But of course, anti-Semitism on the left is only connected to Israel.

And it's clear how this will end. In a year and a half, Omar will fight a number of Democratic challengers, more moderate than her, who will portray her as an extremist and throw her anti-Semitic comments back at her. Her supporters, some of whom will be young Jews, will present this as the "Israel lobby's revenge" and highlight the many donations her challengers will receive in "Jewish money."

Welcome to the future of politics in the era of Corbyn, Trump and Omar.