This isn’t a time for joking. It is now clear that it isn’t a time for mild “dialogue” either.  In America, Ilhan Omar has the right to express anti-Semitic views, using, if she chooses, the same anti-Semitic themes as Nazi propagandists.  Her constituents in Minnesota have the right to elect her to Congress.  But that doesn’t mean any of them has a right to any committee assignments for Omar in the House of Representatives, much less choice ones like the House Foreign Affairs Committee.

(The text of the so-called apology) 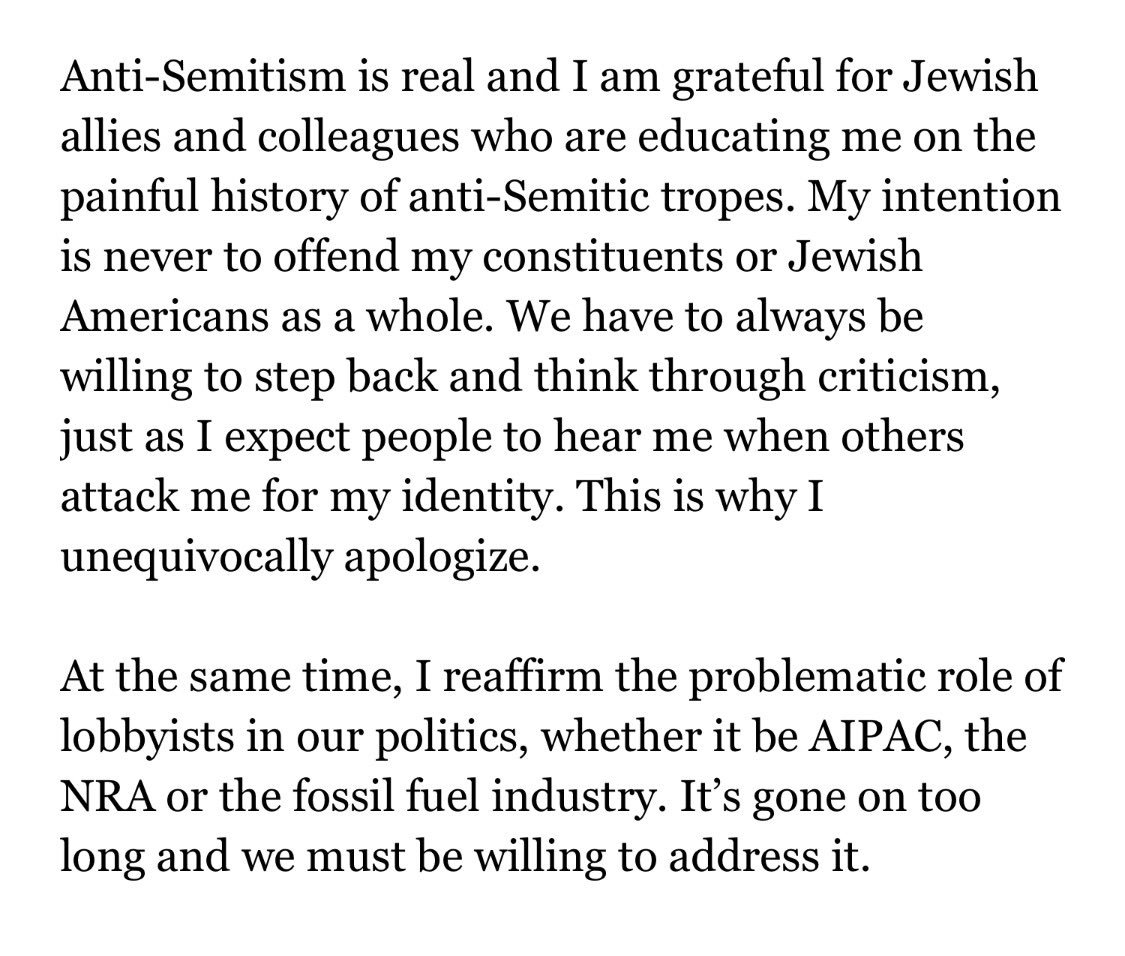 Howard Portnoy noted earlier today that Omar offered an apology for implying that Jews exercise undue influence in Congress by buying it with payoffs from AIPAC.  He assumed – with good reason – that her apology was insincere.  I would point out that the “apology” was basically for being caught using an anti-Semitic trope, but since it also included a double-down on the meaning of the trope, the “apology” outed its own self as a fake.

It’s worth pointing out in passing that AIPAC doesn’t donate to political candidates, and is far from the top tier of lobbyists in the U.S., having spent only about $3.5 million on lobbying activities in 2018.  (For comparison, the U.S. Chamber of Commerce spent nearly $95 million on lobbying in 2018.  Alphabet, the parent company of Google, spent $21.2 million, and Amazon spent $14.4 million.)

Besides observing that the Islamic advocacy group CAIR lobbies governments at all levels in the United States – federal, state, and local – as the groups cited by Omar do, we can also point out that AIPAC is an American citizens’ group.  It is not sponsored by a foreign government, and it takes no money from a foreign government.  To suggest that Americans can’t form topical groups for the purpose of lobbying their own government is absurd.

But there are two additional points to make, both of them decisive.  One is that shortly after issuing her “apology” on Monday, Ilhan Omar retweeted the very Twitter thread in which she had made her earlier, anti-Semitic claims.  This is not the action of someone feeling remorse for making those claims.

That vindicates pointedly Howard Portnoy’s grim assumption that, for Omar, her anti-Semitism is a matter of deeply held beliefs.

She also, however, went on to tweet a rhapsodic endorsement of an 11 February tweet thread from Mr. Ady Barkan, an activist who participated in a Democrat’s campaign in Ohio in 2006.  During that campaign, according to Barkan, he got first-hand experience with AIPAC:

“I am deeply disappointed in @SpeakerPelosi for her failure today. When AIPAC and its army try to silence criticism of the immoral, illegal, inhumane occupation by screaming about anti-semitism and claiming that nobody may ever talk about how the Israel lobby uses money to build power, don’t fall for their bull—t,” he wrote.

Barkan’s implication – he suggests that his candidate endorsed AIPAC positions out of desperation for funds, and it was “all about the Benjamins” – is the kind of elided lie of omission that typically lies behind the reappearance of an anti-Semitic trope.

As mentioned before, AIPAC doesn’t donate money to candidates.  AIPAC’s role in elections, to the extent it has one, is to provide a source of touchstone positions on issues, which candidates can publicly embrace or not.  Voters, including donors, who align themselves with AIPAC positions are naturally interested in how well candidates do the same.  But this is (a) typical of interest groups, (b) non-nefarious, and (c) not about AIPAC dealing in Benjamins, or indeed about Jews or Israel supporters dealing in Benjamins, any more than anyone else does.

The other key point is a very important one, so please stay with me here.  A number of Democrats, both Jewish and non-Jewish, have spoken about Omar’s words in terms of the “hurtful” nature of anti-Semitic tropes.  That is understandable, but it’s not actually the most significant issue.

What people find hurtful – or claim to find hurtful – often comes and goes.  There are people today who claim that it is terribly hurtful when others say the facts of biology are incontrovertible, and the DNA that makes a human male “XY” cannot be changed.  We need not dispute the hurt some people may feel over that to very logically and sensibly – and freely –  debate what the rest of us are supposed to do about it.

Some Jewish pundits, meanwhile, have actually come out swinging against Omar’s critics, seeming to indicate by their dismissal of her unquestionably anti-Semitic terms that their feelings aren’t hurt at all.

That cannot be a guide to our conduct.

The most important thing about anti-Semitic tropes is not how much they hurt (or don’t hurt) Jews’ feelings.  It’s how invariably and systematically they are tied to devaluing Jews socially, politically, and morally, and how they are used as justification for vilifying Jews and treating them differently.

Anti-Semitic tropes have a history that goes back for centuries prior to Nazi Germany.  If allowed to gain an aura of legitimacy, they always lead to the same thing: Jew-hatred poisoning politics and public policy-making; appalling mistreatment of Jews; and social divisions that end in paroxysms of self-destruction for whole peoples.

That factor is especially urgent at a time when anti-Semitism is on a dramatic rise in Europe, and has reared its ugly head in a less pervasive but still disquieting pattern in the United States.  Examples of the latter include the massacre at the Tree of Life Synagogue in Pittsburgh, the recurring assaults on Chasidic Jews in Brooklyn in recent months, and the anti-Semitic yelping of neo-Nazis in Charlottesville in August 2017.

This situation with Ilhan Omar is not one to be addressed with an apology.  It requires immediate sanction.

Howard Portnoy suggested Omar resign.  I doubt she is reachable by such moral appeals.  I don’t know if the Democratic leadership in Congress is.  But if congressional Democrats want to do the right thing, they will remove Omar from her House committee assignments – e.g., as Republicans did to sanction Rep. Steven King – and place her under censure.

Anti-Semitism must not have an open door to tacit accommodation, as if it is a form of constituent interest that may figure in normal political bargaining.  The stand has to be taken against it now.  Anti-Semitism like Omar’s must render her ineligible for leadership or influence as a legislator.  Minnesota voters can then decide what they want to do about that.

J.E. Dyer is a retired Naval Intelligence officer who lives in Southern California, blogging as The Optimistic Conservative for domestic tranquility and world peace. Her articles have appeared at Hot Air, Commentary’s Contentions, Patheos, The Daily Caller, The Jewish Press, and The Weekly Standard.