Slavish conformism to conventional wisdom has done practically nothing to resolve the conflict between the Palestinians and Israel, trapping the sides in a stalemate for decades. Yet, in The Sydney Morning Herald, academic Paul Duffill relied upon traditionally unhelpful cliches in his analysis of recent Australian developments vis-à-vis Israel and the Palestinians (Gap between parties becomes a chasm on Middle East peace). 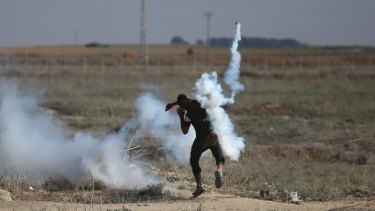 A Palestinian protester throws back a teargas canister fired by Israeli soldiers during clashes on the border with Gaza.Credit:AP

According to his view, the Morrison government’s recognition of west Jerusalem as Israel’s capital undermined prospects for peace, while the federal Labor Party national conference call for a future ALP government to immediately recognise a Palestinian state bolstered it. A look at some basic recent history shows that, in reality, the opposite is true.

Besides grounding peace expectations in reality – west Jerusalem has been Israel’s capital since 1949 and is not occupied territory – Morrison’s announcement was no free kick for Israel. Rather, for the first time and in a measured way, Australia gave an explicit endorsement to the establishment of a Palestinian state with its capital in east Jerusalem should the Palestinians agree to peace with Israel.

This represented a clear incentive for Palestinian leaders to return to negotiations with Israel with the assurance that Palestinian national aspirations would have the backing of Australia – provided, naturally, they agree to live alongside Israel in peace.

The necessity for the Palestinians to make peace with Israel as a prerequisite for the establishment of a Palestinian state isn’t arbitrary or the result of inherently “unfair” imbalances of power. It is a reflection of the reality that the Palestinians rejected the UN partition plan of November 29, 1947, establishing two states, in favour of open-ended war. 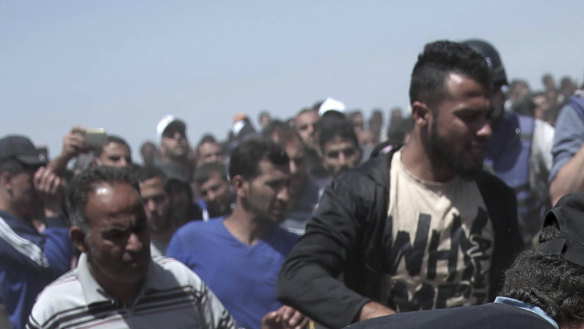 Moreover, rejectionism continues to this day. The Palestinians have been given multiple opportunities to reverse their historic own-goal and accept statehood many times since then but have always broken off talks at the moment of truth, refusing the very independence they claim to pine for if the price is to end their conflict with Israel.

These rejections include three widely reported, credible offers of statehood by Israel in 2000, 2001, and 2008.

Martin Indyk, a former US Ambassador to Israel who served as President Obama's special envoy on the Middle East, told Al Jazeera in 2016: “We have [Israeli Prime Minister Ehud] Barak and [Israeli Prime Minister Ehud] Olmert offering the Palestinians 95 per cent to 97 per cent of the West Bank and all of Gaza, and they didn't take it. So, you know, there are two sides to every story.”

The Palestinians have not only been offered statehood and turned it down, since 2014 their leadership has categorically refused to negotiate at all. This is why the idea that the key to ending this conflict is to supposedly provide the Palestinians equal power with Israel by granting recognition to the “State of Palestine” makes little sense. 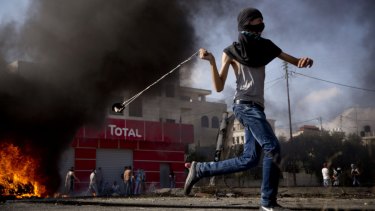 A young Palestinian hurls a stone during clashes with Israeli troops near Ramallah. Credit:AP

Firstly, contrary to what Palestinian activists would have us believe, many of the 137 countries that have supposedly recognised “Palestine” are members of the Arab or Muslim blocs which recognise Palestine, but not Israel, and have done so for decades.

Western countries like Australia are overwhelmingly on the same page regarding premature recognition of Palestine – apart from Sweden, they’re all against it because it would be damaging to the interests of peace. It is also contrary to international law; there is currently no Palestinian entity that meets the criteria for statehood under the 1933 Montevideo Convention on the Rights and Duties of States.

Secondly, probably the most important concept in conflict resolution studies is "ripeness theory", developed mainly by American academic I William Zartman. According to this theory, "Parties resolve their conflict only when they are ready to do so – when alternative, usually unilateral, means of achieving a satisfactory result are blocked and the parties find themselves in an uncomfortable and costly predicament."

Machiavellian manipulations of the kind proposed by proponents of recognition are very damaging to promoting "ripeness" on the Palestinian side – the side that does not even want to negotiate.

As veteran American peace negotiator Dennis Ross wrote in the New York Times in 2015: “Palestinian political culture is rooted in a narrative of injustice … Compromise is portrayed as betrayal, and negotiations – which are by definition about mutual concessions – will inevitably force any Palestinian leader to challenge his people by making a politically costly decision … If saying yes [to compromise] is costly and doing nothing isn’t, why should we expect the Palestinians to change course?”

Under both the 1994 Oslo Accords – which eventually led to Israel ceding full administrative control of almost half of the West Bank and all of Gaza – and in its many subsequent peace offers, Israel has already shown a willingness to make painful compromises, including on the contentious settlement issue.

However, Israel cannot make peace on its own, nor can it be expected to accept the creation of a hostile, armed state on the doorstep of its major cities without a viable peace agreement. When it comes to attaining a state to provide a homeland and security for its people, the Palestinian leadership has always had the option of uttering the three-letter word that has eluded it so far in negotiations. That word is “yes”.

Australian policy needs to be based on giving them incentives to say “yes”, as the Jerusalem announcement did, not rewarding them for continuing to say “no” – which is what unilateral recognition of Palestinian statehood would amount to.

Ahron Shapiro is a senior policy analyst at the Australia/Israel & Jewish Affairs Council.