Luciana Berger is an incredibly brave woman. For three years she’s been the focus point of her party’s antisemitism problem, facing death threats and horrific abuse, and at last year’s Labour conference had to have a police guard.

So, I’m pleased that this morning, with six colleagues beside her, she led its breakaway movement The Independent Group of MPs, citing Labour’s “institutional antisemitism” as the reason she felt forced to leave the party.

How on earth did it get to this? Just under a year ago I, along with hundreds of other Jews, stood outside parliament and demanded “enough is enough” of Labour antisemitism. It was my first demonstration since my student days and I wasn’t the only one. The group of people I was among weren’t really sure what to do. There wasn’t a protest expert among us, we just knew that something had to be done and so we booed and we hissed and we talked about chicken soup and bagels.

Like Berger I am a mother, and the next day, when my children asked where I had been, I had to talk to them about why antisemitism was still a problem. It’s hard to give an answer to the question: “Why do people hate Jews?” All I could do was tell them that it needed to be stopped.

For those of us at the demonstration, all we wanted was to be listened to. We didn’t realise things would get worse. We thought that Labour – a party many of us supported and were often members of – was proudly anti-racist. 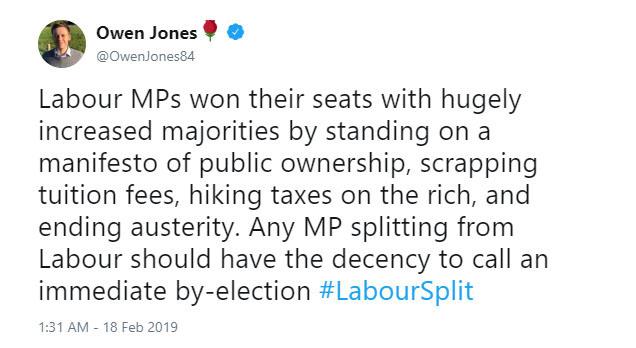 But antisemitism continued unabated. MPs like Chris Williamson openly supported people who had trolled the Jewish community. And when asked about his own dealings with antisemites, Jeremy Corbyn prevaricated and dissembled. He never once said that antisemites disgusted him and would be immediately thrown out of the party.  He never attempted to understand why the Jewish community felt as it did.

The more Jews shouted about antisemitism the more we were gaslighted,  told it was all sorted, there wasn’t a problem, oh and what about the Tory problem with Islamophobia, or Israel? We were told the only thing wrong was us and we were bringing antisemitism on ourselves. And all of this was set against a backdrop of rising crime against Jews.

For all of this time there has been a row raging within the Jewish community about how best to handle this problem. There are some who insisted – and still do –  that we should stay and fight within the party. I don’t blame them for that attitude but I believe that we lost that war long ago. I, for one, am tired of screaming and screaming and screaming and being told “there is no need to shout, everything is fine”. As one friend said to me: there is no point in trying to cut a cancer from a dead body.

So now there is a breakaway group. I now have a left-leaning party I could vote for that isn’t antisemitic. It has restored my faith in politicians doing the right thing. But I don’t feel any elation. I feel tearful because I fear that things are going to get worse, not better, for Jews among the left.

We have long been the hard left’s bogeyman but now there is something they can really blame the Jews for. This morning I already saw tweets blaming Israel for the split. There is no attempt at self-knowledge.

In the meantime, Labour is going to become an even more poisonous place for Jews. Across the movement Jews have torn up their memberships to be replaced by hard-left zealots. More MPs may join the seven who have already gone, this will split the Labour vote and potentially keep the Tories in power. Those on the left who have long hated us, will now in their warped minds have a reason.