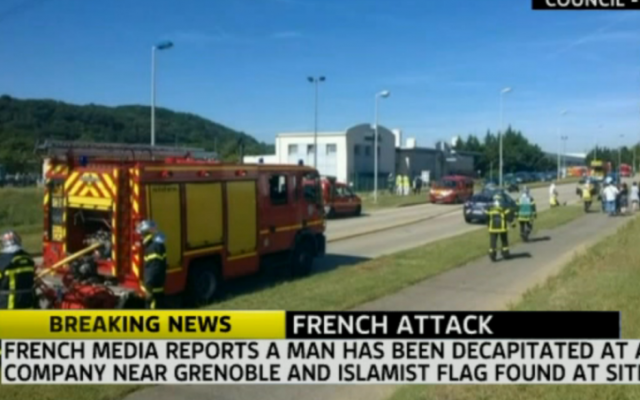 JTA — Half of the regular members of the Jewish community in the city of Grenoble in eastern France have left due to anti-Semitism, their rabbi said.

Rabbi Nissim Sultan on Grenoble, a city of 160,000 residents near Lyon with several hundred Jews, said this during an interview Tuesday with the France Bleu Isère radio station.

“It’s a troubling phenomenon that began about 15 years ago,” he said. “The people who make up the core of our community have left, including young families with children and pensioners.” They left to Israel, elsewhere in France, the United States and Canada, he said.

Each anti-Semitic graffiti, he said, “raises awareness to a global reality that means we fear for our children at school, on the street. So as responsible parents, we take measures.” 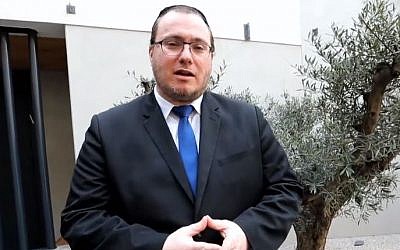 Approximately 20,000 French Jews have left for Israel since 2014, a major increase over the previous four years. Thousands more have emigrated elsewhere and many thousands have moved inside France to safer neighborhoods amid a substantial increase in anti-Semitic hate crimes.

Last month, authorities shut down Grenoble’s Al-Kawthar Mosque due to the preaching of hate and incitement, including against Jews, by imams there, the Le Dauphine news site reported. 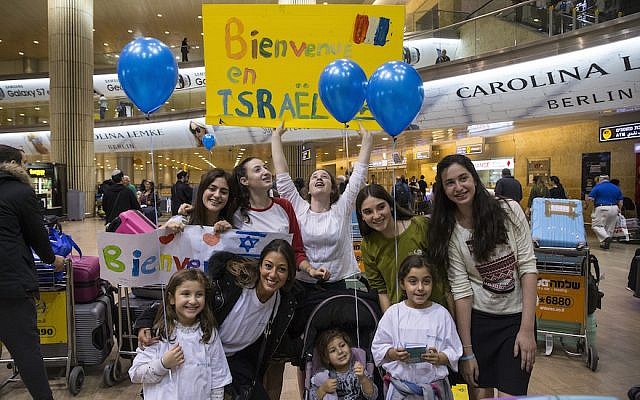 The scourge has grown in recent years “and the situation has got worse in recent weeks,” Macron told the annual dinner of the Representative Council of French Jewish Institutions (CRIF).

“Our country, and for that matter all of Europe and most Western democracies, seems to be facing a resurgence of anti-Semitism unseen since World War II,” he added.

His comments come after a cemetery in the Alsace region, near Germany, was vandalized with 96 Jewish tombstones  daubed with swastikas. 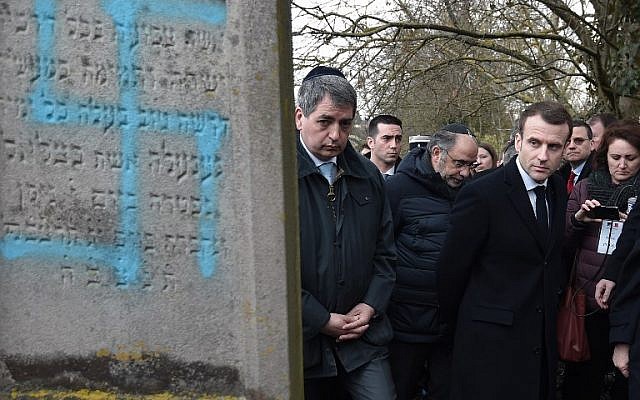 French President Emmanuel Macron looks at a grave vandalized with a swastika during a visit at the Jewish cemetery in Quatzenheim, on February 19, 2019, on the day of nationwide marches against a rise in anti-Semitic attacks. (Frederick Florin/Pool/AFP)

Macron and his government have linked the appearance of swastikas and other anti-Semitic graffiti on artworks, shopfronts and headstones to far-right and far-left elements within the “yellow vest” protest movement.

In recent days, the word “Juden” was spray-painted on the window of a Paris bagel bakery and swastikas were daubed on postbox portraits of late French Holocaust survivor and women’s rights icon Simone Veil.

Anti-Semitism has a long history in France where society was deeply split at the end of the 19th century by the Alfred Dreyfus affair over a Jewish army captain wrongly convicted of treason.

During World War II, the French Vichy government collaborated with Germany notably in the deportation of Jews to death camps.

Traditionally associated with the far right, anti-Semitism has become ingrained in the high-rise French housing estates that house many members of France’s Muslim community, Europe’s largest.

Jews have been targeted in several attacks by French jihadists in recent years.

But the proliferation of anti-Semitic graffiti is seen as a new trend.