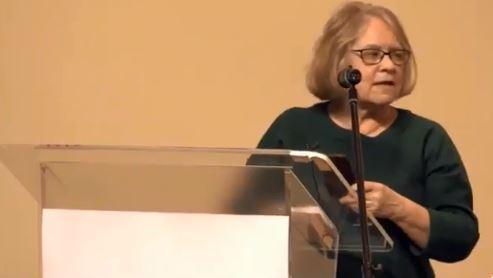 Jeremy Corbyn sent a "special message" to a meeting of left-wing activists on Monday which was read out by a close ally who then called antisemitism allegations against Labour a "huge lie".

Lindsey German - a founding member of the Stop The War Coalition of which Mr Corbyn served as chairman - claimed the Labour leader was now really under attack because of his support for the Palestinian cause.

The long-time Socialist Workers Party member then told the meeting, where Tariq Ali and Jewish Voice for Labour member Glyn Secker also spoke, that Islamophobia, not antisemitism, was the "one dominant racism in this country."

In footage uncovered by Twitter account @TheGolem, Ms German added that she was not a member of the Labour Party because she "always thought she could better help Jeremy from outside than within it."

Mr Corbyn wrote: "The only thing that could hold us back would be if we were to turn on each other rather than on the Tory government and wealthy establishment interests they represent."

Ms German then spoke of her "anger" at the way she believed pro-Palestinian activists such as herself had been "turned now... supposedly into a movement in support of antisemitism."

In a clear attempt to pit claims of antisemitism against allegations of Islamophobia, Ms German then spoke of the "huge lie" which "looks not at the reality of racism in this country where there is one dominant racism that is going on and that is Islamophobia, which is the attacks on Muslims in this country."

She then added: "It actually tries to say that the biggest problem that we have in this country is antisemtism - and that simply is not true."

"And I think no more so than in the treatment of Jeremy Corbyn himself and the tremendous attacks on him."

Describing Mr Corbyn as a "committed anti-racist" who had spoken at "all the Palestine demonstrations", she added that he was "never accused of antisemitism before he became Labour leader although he has been an MP since 1983."

Both the JC and organisations such as the Community Security Trust repeatedly highlighted concerns about Mr Corbyn's association with known antisemites before he became leader.

She said Dame Margaret was "not a success" both as leader of Islington Council and a Barking MP.

She then admitted that "various things I say tonight and various things I've written and read" would have her up before Labour's disciplinary panels "all the time" were she a party member.

She added: "When you have a witch-hunt like this there is only one thing you can do. You have to stand up to it every time - you can't run away from it."

In the audience at Monday's event was Gerry Downing who was expelled from Labour in March 2016 after writing that the 9/11 terrorists should never be condemned.

Mr Downing posted a tweet in 2014 referring to what he called “Hamas heroism” and claimed prominent historian Sir Ian Kershaw had a “Zionist minder”.

The website of his Socialist Fight group has published articles including one demanding that “Marxists must address the Jewish Question” and another referring to a “world Jewish-Zionist Bourgeoisie”.