by Joel Adams and Rory Tingle

A Labour MP has sparked fury by sharing a video he claimed showed Israeli soldiers 'beating up Palestinian children for the fun of it - when it was actually filmed in Guatemala.

Grahame Morris, outgoing chairman of Labour Friends Of Palestine, tweeted the footage of troops pulling the teenagers' hair and kicking them in the face at around 5pm on Easter Monday, promptly attracting a storm of criticism.

Shockingly, he had still not removed the tweet early this morning despite acknowledging its inaccuracy, claiming he was 'harvesting and documenting a few more of my trolls' before he would do so.

He eventually did so just after 10am and tweeted an apology. 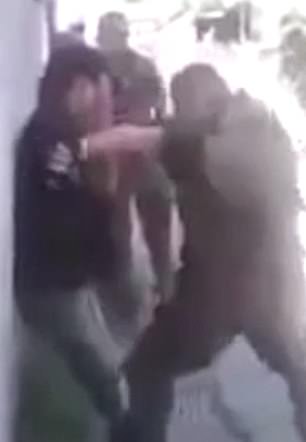 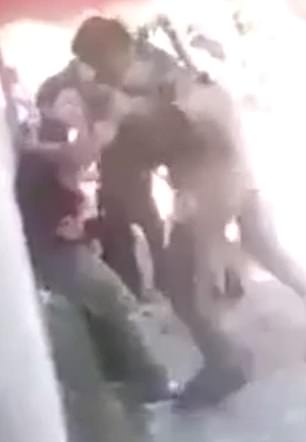 The MP for Easington tweeted: 'Marvellous, absolutely marvellous the Israeli Army, the best financed, best trained, best equipped army in the world caught on camera beating up Palestinian children for the fun of it.

'May God forgive them. What would Jim Royle say on an Easter Monday.'

The official English language Twitter account of the Israel Defence Forces (IDF) replied with a link to a 2015 Vice News article showing the real facts surrounding the video. 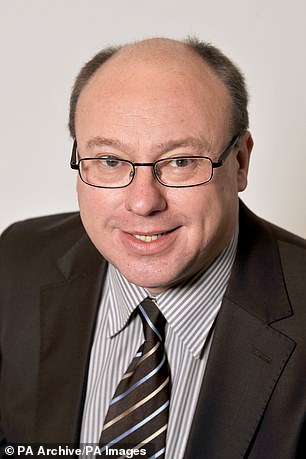 Morris, Labour MP for Easington, in an undated file photo

They wrote: 'The only marvelous thing here are your lies.

'These are not IDF soldiers. Apologies would be in order.'

Mr Morris has not responded to the IDF.

When another Twitter user pointed out his mistake, the  MP replied: 'TY [thank you] - you are right and many apologies for my honest mistake there are lots of verifiable documented examples of the IDF abusing Palestinian child prisoners I have seen for myself in Court in the West Bank - but am harvesting and documenting a few more of my trolls yet thanks.'

More than 1,000 people responded to the tweet, overwhelmingly calling for Mr Morris to delete, or retract, or apologise for his post.

The Labour MP's post was a retweet of left-wing blogger Rachael Swindon, whose original tweet read: 'So @IsraeliPM. Why does this secretly recorded video appear to show your cowardly soldiers brutally beating up Palestinian children, again? Disturbing.'

Ms Swindon has since deleted her post and later apologised for 'not knowing the origin of the video'.

The appalling 1m43s clip, which surfaced in August of 2015 and was shot in late July of that year, shows two teens who allegedly ran from a military convoy in Chimaltenango, in central Guatemala, and defied an order to stop.

Mr Morris's tweet received a handful of likes and retweets, but replies from more than 1,000 Twitter users - most pointing out his error or demanding a retraction 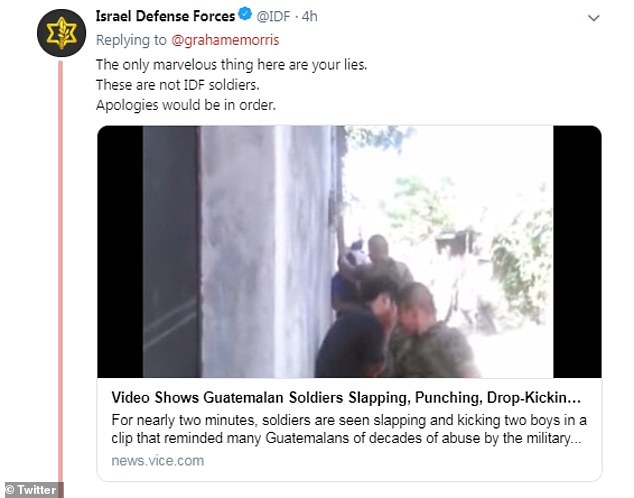 A group of soldiers with rifles slung over the backs take turns slapping, punching, kneeing, and kicking the young men.

The row over Mr Morris' tweet comes as the Equalities and Human Rights Commission gathers evidence which it will review ahead of deciding whether to launch a formal probe into the party's handling of anti-Semitism.

It would make Labour only the second British political party to face a formal investigation by the EHRC, after the BNP.

The Jewish Labour Movement earlier this month said it has no confidence in Mr Corbyn's leadership amid the ongoing anti-Semitism crisis.

In February seven Labour MPs quit the party to form The Independent Group in fury at Mr Corbyn's handling of anti-Semitism and Brexit.

Mr Corbyn has previously acknowledged that the party had been 'too slow' in dealing with cases of abuse'.

Mr Morris and the Labour Party have been contacted for comment.

The Labour Party is facing the possibility of an investigation from the equalities watchdog over its alleged failure to deal anti-Semitism.

A source at the Equalities and Human Rights Commission (EHRC) told the Sunday Times that the amount of evidence against Labour members can trigger a full probe.

It is expected the investigation would look at 'systematic unlawful acts of anti-Semitism' by party members.

This would enable investigators to get the legal authority to seize emails and internal documents from the party.

In the 12 years of the commission's existence, the only other political party it has investigated was the British National Party.

The watchdog's board is expected to meet next month to review evidence and decide whether to proceed with a full investigation.

Last month three Labour members were arrested by the Met Police as part of a criminal investigation into anti-Semitism in the party.