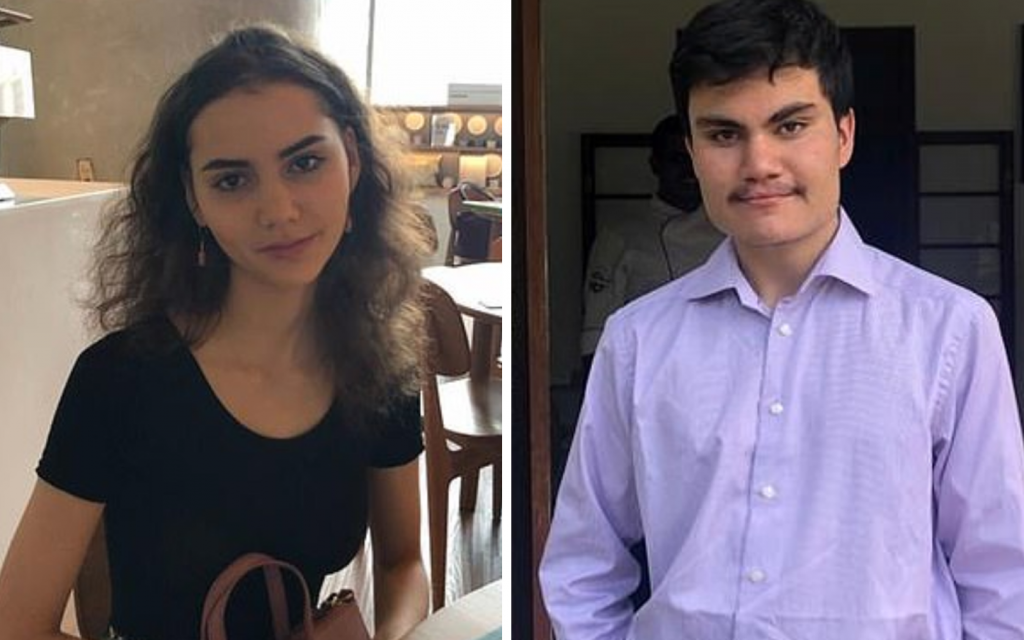 Heartfelt tributes were made in Parliament today to two Jewish siblings who were among those murdered in the Easter Sunday terror attacks in Sri Lanka.

Speaking in the House of Lords, Lord Leigh of Hurley paid his respects to Amelie, 15, and Daniel Linsey, 19, two members of Westminster synagogue, of which he is the president.

The brother and sister were among the eight Brits who perished in the coordinated bombing attacks which claimed more than 350 lives.

Lord Leigh told the House: “While the intended target of this atrocity were clearly meant to be Christian, the terrorists’ bombs did not discriminate. The Linsey family were members of my synagogue They shared the same classes as my children. Amelie celebrated her batmitzvah last March, reading with poise, maturity and warmth from our Torah scrolls.”

He added: “Daniel was especially interested in Jewish festivals. He came to our synagogue before Purim… to help our staff setting up for the evening festivities. We have pledged as a community to offer our love and support to the Linsey family and do everything we can every step of the way. The Jewish community is used to counselling mourners who have been affected by the terrorists’ bomb, and this is another chapter in this sad and sorry book.”

Addressing the minister, Baroness Goldie, Lord Leigh requested the government “double its efforts to ensure that the bodies of the siblings are returned as soon as possible.”

He added: ” The families are trying to make progress and would be very grateful for any assistance she can provide through the civil service, to ensure that happens as quickly as possible, as required by the Jewish faith.”

In response the minister paid tributes to Lord Leigh’s “poignant” comments, saying it “indicates starkly the enormity of what has happened when children are the victims of this mindless criminality.

On the issue of helping to transport and return bodies to this country, there is help available”, but she suggested Lord Leigh should “speak to me after” the debate to see if there “was something specific I can do.”

Amelie and Daniel’s father, Matthew Linsey, a dual US-UK citizen, spoke to CNN in an emotional interview, where he paid respects to his children in the wake of the bombings.

He relayed the aftermath of the explosion, saying: “When the bomb went off, it’s hard to describe.. it’s like a wave coming through of pressure.”

“My children were so nice. They actually went down to the buffet for me and got the food for me and filled up my plate. And then I said I wanted a bit more. My daughter said I’ll get it, and then the bomb went off and they were both running towards me.

Saying his instinct was to get out “as soon as possible”, he added “maybe I should have just stayed and covered them with my body”, adding that after a second blast near the hotel lift, they “both were unconscious.”

“My daughter seemed to be moving, my son wasn’t. A woman offered to take my daughter downstairs to the ambulance. I needed help moving my son. Someone helped me move him down the stairs and they both ended up in the same hospital.

“I travelled with my son to the hospital.”

In the hospital, he said he “yelled for help” and lost his voice, adding “the people were very helpful.. they did their best. They were very efficient and very kind.”

Board of Deputies president Marie van der Zyl tweeted: “We condemn the shocking bomb attacks on those murdered innocently at prayer in churches in Sri Lanka for Easter morning and in other hotels. All our sympathies are with the victims and their families at this terrible time.”

Chief Rabbi Ephraim Mirvis said: “The sheer scale of the violence places it among the most inhuman acts of mass murder in living memory and our hearts go out to the countless people mourning the loss of loved ones. We grieve alongside you..”

Senior Reform Rabbi Laura Janner-Klausner tweeted: “Horrified by news of terror attacks on churches in Sri Lanka on such a holy day for Christians. Jewish communities stand in solidarity with our Christian friends… rejecting hatred and violence wherever it occurs.”

Senior Rabbi of Liberal Judaism, Danny Rich, said: “Attacks on a synagogue in Pittsburgh, mosques in Christchurch and churches in Sri Lanka are all from the same stable of religious intolerance, bigotry, terrorism and the inability to celebrate difference. We must all rejoice in the differences of humanity, all of which are part of the rich tapestry of the Divine creation.”

In Israel, Benjamin Netanyahu said: “We stand ready to assist the authorities in Sri Lanka at this difficult time. The entire world must unite in the battle against the scourge of terrorism.”

President Reuven Rivlin tweeted: “The attacks in #SriLanka, including those at prayer celebrating #EasterSunday. are a despicable crime [sic]. We are all children of God; an attack on one religion is an attack on us all. #Israel sends condolences to the families of the victims and wishes for the recovery of the injured.”

The first six blasts occurred at almost the same time on Sunday morning, four in the commercial capital of Colombo, and the others in the cities of Negombo and Batticaloa.

A seventh took place hours later and an eighth, in a residential neighbourhood, was determined to be a suicide bomb attack.

About 38 of the victims were identified as “foreigners”, with Indian, American, British and Dutch citizens reportedly among the dead.

The government said a local jihadist group was behind the attacks and the police have made a number of arrests. On Tuesday, the Islamic State group claimed the attack, but a BBC correspondent says its claim should be treated cautiously.