Published Tuesday May 7, 2019
from Times of Israel 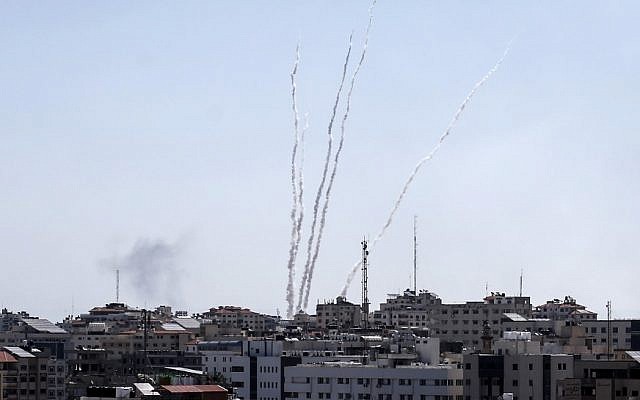 A picture taken from the Gaza Strip on May 4, 2019 shows rockets being launched toward Israel (MAHMUD HAMS / AFP)

Several governments in Europe on Saturday strongly condemned the rocket fire from Gaza at Israel, with some also urging Jerusalem to react with “restraint” and “proportionality.”

“The rocket fire from Gaza towards Israel must stop immediately. A de-escalation of this dangerous situation is urgently needed to ensure that civilians’ lives are protected,” a spokesperson for European Union foreign policy chief Federica Mogherini said on Saturday evening.

“Israelis and Palestinians both have the right to live in peace, security and dignity. Only a political solution can put an end to the violence. Efforts by Egypt and the UN to calm the situation have the European Union’s full support.”

The EU’s embassy in Israel also translated the statement into Hebrew:

Earlier during the day, the EU’s ambassador in Ramat Gan, Emanuele Giaufret, took to Twitter to express concern at the volatile security situation, writing that “firing indiscriminately against civilians [is] unacceptable.”

On Saturday, Gaza terrorists fired some 220 rockets at various Israeli towns, dozens of which were intercepted by the Iron Dome missile defense system. In response, the Israel Defense Forces launched a series of strikes on terror-related targets in the coastal enclave.

As of Saturday evening, the US administration had not publicly reacted to the situation.

French Ambassador to Israel Hélène Le Gal expressed “solidarity with the population in Israel’s South.” Her German colleague, Susanne Wasum-Rainer said she strongly condemned the attacks on Israel, but at the same time urged “all parties to protect civilian lives.”

The Foreign Ministry in Berlin also condemned the “massive rocket fire” on Israel. “There is nothing that could justify attacks on civilians. Israel has the right to defend itself and to protect its citizens,” the ministry wrote on its Twitter account. 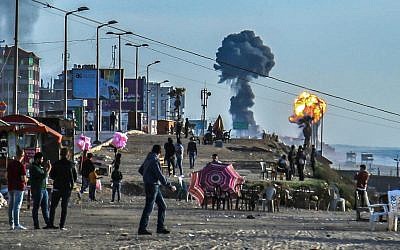 Palestinians gather on the beach in Gaza City as smoke and fire billow following airstrikes by Israel in response to rockets fired by Palestinian terror groups on May 4, 2019. (Sami al-Sultan/AFP)

“We are very concerned about the ongoing military confrontation and urge all sides to exercise restraint and the safeguard proportionality,” the statement went on. Germany supports the “important efforts” made by Egypt and the United Nations to calm the situation, it concluded.

“Austria firmly stands behind Israel as the security of the country and its population is a raison d’état for Austria,” he declared.

Sweden’s ambassador to Israel, Magnus Hellgren, wrote on Twitter that indiscriminate firing on civilians is “completely unacceptable and can never, never be justified. Must stop. De-escalation urgently needed.”

The Spanish embassy in Tel Aviv similarly condemned the rockets as “unacceptable,” but also called for “violence to cease” as well as for “quiet and restraint.”

Cypriot Ambassador to Israel Thessalia S. Shambos wrote on Twitter that: “Cyprus strongly condemns the multiple rocket attacks from the Gaza Strip towards Israel. Indiscriminate targeting of civilians is totally unacceptable. Solidarity with all affected communities. Full support to the critical efforts of Egypt and UN to de-escalate the situation.”