Federal officials have announced 109 hate crime charges against the 19-year-old man accused of opening fire on a Southern California synagogue during a Passover service last month. One woman was killed and three people, including a rabbi and a child, were wounded. Federal and local law enforcement officials announced the charges at a news conference in San Diego on Thursday.

"We will not allow our community members to be hunted in their houses of worship, where they should feel free and safe to exercise their right to practice their religion," said U.S. Attorney Robert S. Brewer, Jr. said in a statement. "Our actions today are inspired by our desire to achieve justice for all of the victims and their families."

The complaint says the gunman, identified as John T. Earnest, came to the building on April 27 armed with an AR-15 style semi-automatic rifle that was fully loaded with a 10-round magazine and wearing a chest rig with five additional magazines, each loaded with 10 rounds. Prosecutors say the gunman opened fire, killing Lori Gilbert-Kaye, 60, and wounding an 8-year-old girl, her uncle, and Rabbi Yisroel Goldstein, who was leading the service at the Chabad of Poway synagogue on the last day of Passover, a major Jewish holiday.

"As I turned around, I saw the face of this murderer, of this terrorist," Goldstein told CBS News' David Begnaud.

When Earnest tried unsuccessfully to re-load, several congregants chased him as he fled the synagogue. Earnest was later arrested by law enforcement authorities who found the rifle and additional magazines in his car, the complaint says.

After the gunman fled the scene, he spoke to a 911 dispatcher and said he opened fire at a synagogue, thought he killed some people, and said he did it because "I'm just trying to defend my nation from the Jewish people... They're destroying our people," according to the federal complaint. 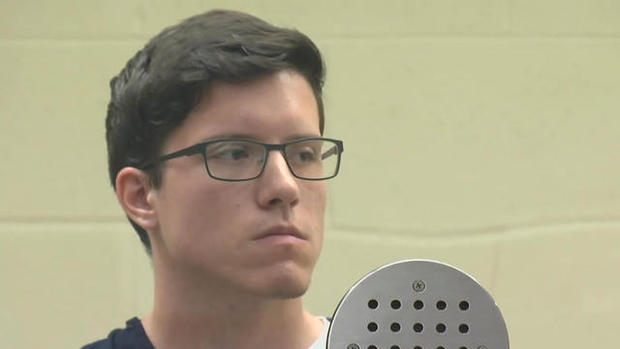 He went on to tell the dispatcher that he did it because "the Jewish people are destroying the white race."

In a court appearance last month, Earnest pleaded not guilty to state charges of murder and attempted murder. The federal charges include murder for the killing of Lori Gilbert-Kaye, who was hit twice as she prayed in the foyer. It also includes a charge for the attempted murder of 53 others and a count of damage to a religious property by use of fire for allegedly setting a mosque ablaze in nearby Escondido.  Federal authorities say he admitted to the arson.

The federal complaint says Earnest was motivated by hatred toward the Jewish and Muslim communities. It says law enforcement found a manifesto on Earnest's computer with anti-Semitic and anti-Muslim statements in which he allegedly wrote that his only regret was that he did not kill more people.  According to the complaint, it cited as inspiration last year's shooting at the Tree of Life synagogue in Pittsburgh, where 11 died, and the massacre at two mosques in Christchurch, New Zealand, where 51 people were killed.

Earnest's embrace of white supremacy and anti-Semitism stunned his family and others close to him. He lived with his parents and made the dean's list both semesters last year as a nursing student at California State University, San Marcos.

"Our son's actions were informed by people we do not know, and ideas we do not hold," the family wrote in a statement released last month. "Like our other five children, he was raised in a family, a faith, and a community that all rejected hate and taught that love must be the motive for everything we do. How our son was attracted to such darkness is a terrifying mystery to us, though we are confident that law enforcement will uncover many details of the path that he took to this evil and despicable act."