Why was Ahed Tamimi allowed to enter Britain? 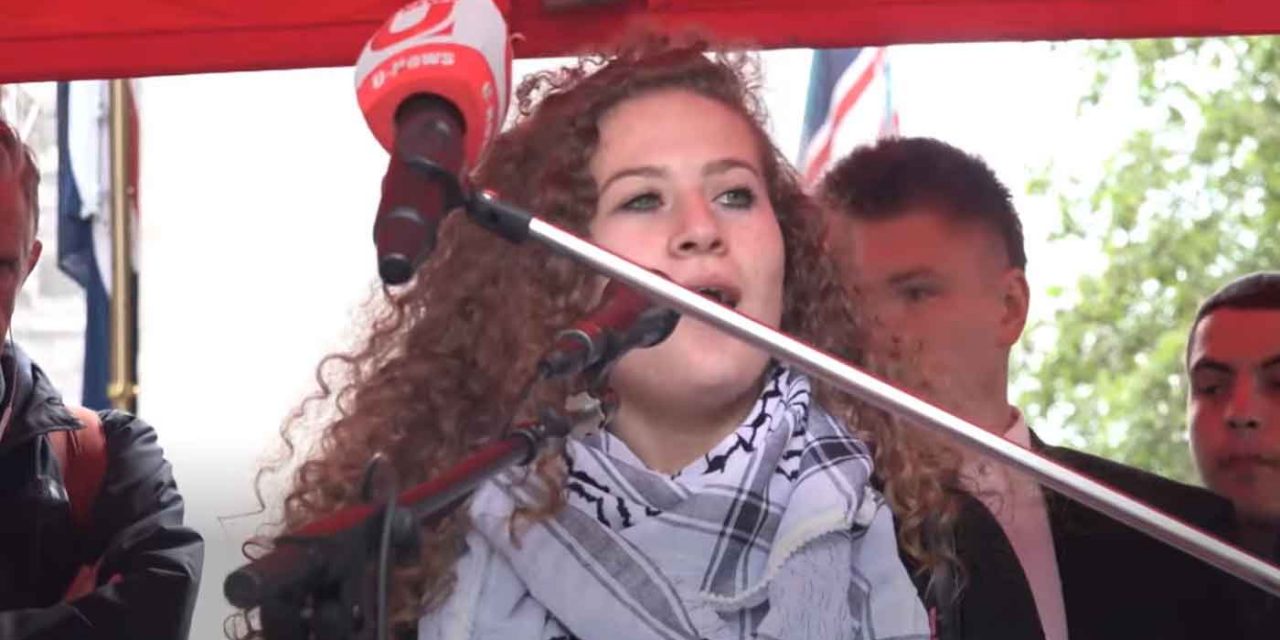 Ahed Tamimi is a convicted criminal, an inciter of terrorism and has spoken libel against the UK, yet she is currently in the UK, speaking to crowds of thousands, sharing the stage with Labour politicians and encouraging people to become “freedom fighters”.

There are so many reasons why Ahed Tamimi shouldn’t have even been allowed into this country:

About 2,000 pro-Palestine protesters marched in Central London on Saturday with hundreds of placards with messages from “Israel provokes antisemitism” to swastikas daubed over the Jewish Star of David, showing that their hatred of Israel was morphing into anti-Semitism.

Ahed Tamimi, who served almost eight months in prison in Israel for hitting an Israeli soldier and telling people to carry out stabbing attacks and suicide bombings, addressed the crowd in a short speech, saying, “We choose to struggle for freedom and justice. We choose to be freedom fighters… from the river to the sea, Palestine will be free.”

It is important to note that “freedom fighters” is the common term used to describe Palestinian terrorists, and the saying “from the river to the sea, Palestine will be free” is a call for Israel’s destruction, which is situated between the Jordan river to the Mediterranean sea.

So how could someone who holds anti-Semitic views, who advocates terrorism and hates the UK be allowed to enter this country? What’s more, why were political leaders supporting her? She should not be allowed here, let alone be given such a platform.

Sadly, we won’t find the answer out any time soon. Below are the reasons why Ahed Tamimi shouldn’t have been allowed.

Ahed Tamimi’s accusations against the UK

Just last month, Ahed Tamimi was interviewed by Russia Today and levelled a series of derogative statements against the UK, calling the country “racist” and “completely controlled by Israel”.

Tamimi was being asked about her plans to study in the UK, which at the time she felt were being stopped because of some basic questions on her application documents.

During the interview, Tamimi charged that “the UK government is completely controlled by Israel, who are the biggest supporter of terrorism, they encourage the killing of Palestinian people.”

“The UK is completely occupied and controlled by Israel and it is supporting Israel to kill innocent people who are demonstrating for their rights,” Tamimi said.

Not only is Tamimi making libellous claims about the UK, but she is also using the anti-Semitic trope that Israel (or Jews) control foreign governments, in this case the UK.

Tamimi continued: “The whole world is defeated, we are alone”, before declaring, “but I am pretty sure that the Palestinian people will bring back dignity to the whole world even to the UK who are supporting Israel. The UK brought Zionism to Palestine in the era of the British mandate. We will eventually end this occupation. Their power will not last forever.”

Clearly, this is not the language of someone who is supportive of the UK or someone who the UK should be inviting into this country (and especially not for government figures, such as Labour, to be aligning themselves with).

Ahed Tamimi then spoke of Israel’s actions on the Gaza border, falsely accusing Israel of wanting to “kill all Palestinians” – a blood libel.

“They (Israel) have no right to harm any Palestinian and this is another reflection to their terrorism. They want nothing but to kill all Palestinians so they can take all their land. They believe that all Palestinians should be killed, which also shows that they’re racist.”

Be warned, it is very anti-Israel and there are a lot of lies and distortions throughout the below video.

Ahed Tamimi has become a “symbol of resistance” in the eyes of the Palestinians and, thanks to the biased media reports on her, she is now viewed this way by many in the West. The reality is that she incites and condones terrorism.

She was interviewed on France 24 TV in September asking about her views on Hezbollah.

Tamimi replied, “At the end of the day, everybody is entitled to an opinion. I’m with Hassan Nasrallah…”

When asked if she regretted the outcry her comments caused, Tamimi replied, “Of course I do not regret it. Hassan Nasrallah supports the Palestinian cause, and he is against America and Israel, so I’m with him on that matter. I agree with many people on certain issues and disagree with them on others, but ultimately, I thank him for his support for the Palestinian cause.”

It is important to note that Hezbollah’s actions “against America” include the killing of 241 American soldiers in Beirut in 1983, and his opposition to Israel includes calling for the destruction of Israel and saying that “if [Jews] all gather in Israel, it will save us the trouble of going after them worldwide”.

Hezbollah has just been banned in the United Kingdom as a terrorist organisation. This ban means it is illegal to support Hezbollah, be a member of Hezbollah or even invite support for Hezbollah. It is easily arguable that Ahed Tamimi is inviting support for the leader of Hezbollah, Hassan Nasrallah, a criminal act in the UK. So she should not be allowed to enter the country based on that alone.

Tamimi has previously said it is everyone’s responsibility to slap Israeli soldiers, no matter if the soldier is doing anything bad or not.

This comment is just the tip of the iceberg, however, as Ahed goes on to explain how Palestinians, and herself, are on “the path of the martyrs” and that they are no longer aiming for a two-state solution, but for “the liberation of all of Palestine”.

“The world should not panic or be appalled by a Palestinian who slaps an IDF soldier. Everyone should do it, not just me,” she told Musaique FM, a Tunisian radio station.

She went on to say that “Jerusalem was and will remain the eternal capital of Palestine”.

In another interview (also featured in the video above), Ahed says how the previous generation “fought and died as martyrs” with the aim of a two-state solution. But claimed that her generation “will not repeat this”.

“We, as a generation, will fight for the liberation of Palestine in its entirety”, Ahed Tamimi said.

Note: She is not saying that the mistake was in dying as “martyrs”, but that the cause was for a “two-state solution”. She still believes in the “path of martyrs”, but instead wants Israel destroyed so that only “Palestine” exists.

She went on to clarify that Palestinians will not accept Israel on any part of the land, that Israel controlled 78% of the land before repeating her claim to liberate the whole area.

It is clear that Ahed Tamimi seeks the destruction of Israel. Something she has spoken of many times over the years, as well as her parents.

Ahed Tamimi was arrested after a video of the teen went viral, showing her slapping, punching and kicking two Israeli soldiers who did little to react.

When Ahed Tamimi was arrested, the media and anti-Israel activists were quick to condemn Israel for convicting a child. However, they also failed to recognise the true crime of Ahed Tamimi. She did not just attack Israeli soldiers, she spoke on camera afterwards telling people to continue martyrdom operations, including suicide bombings and stabbing attacks.

Ahed Tamimi’s message to the world:

“I wish that everybody would participate in demonstrations because that is the only way for us to get results; because our strength is in our stones; and I wish that everybody all over the world would unite so we can liberate Palestine, because Trump must bear responsibility for the decision he took for any Palestinian reaction – be it stabbings, martyrdom-seeking operations [i.e. suicide bombings], throwing stones – everyone must do something. So we can unite this way, so we can get our message across in the required way and get this result, that is the liberation of Palestine, Allah willing.”

A family relative said that Ahed would often express a desire to die as a martyr. “She would say ‘I am not scared of them arresting me or killing me. I am struggling for the Palestinian people. Many martyrs have fallen and they deserve a lot. Maybe there will be more martyrs and I will be one of them.’”

It is surprising then that organisations like the Jewish Voice for Labour (JVL) would run campaigns such as, “We are Ahed Tamimi” and that the Labour leader Jeremy Corbyn would give his support to Ahed Tamimi.

Labour MPs have in the past been lectured by Bassam Tamimi (Ahed’s father) inside of the UK Parliament, where his lies and distortions have been allowed to be spoken unchallenged.

Bassam Tamimi has brainwashed his children and used them as weapons to attack Israel. He himself referred to Ahed as a weapon that he wields when talking to children at an American school. He also told that American children to become “Freedom Fighters” for Palestine.

It is also worth noting that Ahed Tamimi’s mother was the one who told the teen to attack the soldiers whilst she filmed, which led to her arrest.

Ahed Tamimi’s family has long been involved in attacks against Israel. Ahlam Tamimi, Ahed’s aunt, is a member of Hamas and carried out a suicide bombing that killed 16 Israelis in a restaurant, including children.