Published Wednesday May 22, 2019
from Reason Magazine

KC Johnson has an excellent piece at the Tablet about a recent controversy at Williams College involving the refusal of the student government to recognize a pro-Israel student group, and the College's administration's subsequent reaction. Perhaps the most striking part of Johnson's piece is the following: 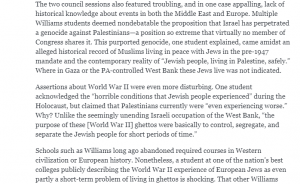 The Holocaust bit speaks for itself. The "genocide against Palestinians" trope, regarding a population which has had among the highest population growth rates in the world, whose standard of living improved dramatically during the Israeli occupation but before Oslo gave them (limited) self-rule, is a great example of people believing something because they want to believe it, regardless of the facts. I've challenged many folks on social media regarding this particular trope, and have concluded that this trope is essentially is evidence-proof, and can only really be explained by a pathological hostility to Israel that not surprisingly often has a strong antisemitic component.

This sort of ignorance mixed with malice reminds me of a prior post of mine about Oberlin College, involving leftist students who dismissed the Holocaust as merely an example of "white on white crime."