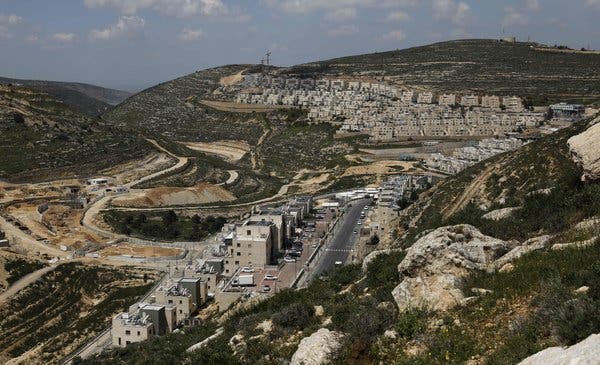 JERUSALEM — Israel has a right to annex at least some, but “unlikely all,” of the West Bank, the United States ambassador, David M. Friedman, said in an interview, opening the door to American acceptance of what would be an enormously provocative act.

Prime Minister Benjamin Netanyahu has promised to begin annexing Jewish settlements in the West Bank, a move that would violate international law and could be a fatal blow to a two-state solution to the Israeli-Palestinian conflict.

“Under certain circumstances,” Mr. Friedman said, “I think Israel has the right to retain some, but unlikely all, of the West Bank.”

In a wide-ranging interview at his Jerusalem residence last week, Mr. Friedman also accused Palestinian leaders of wrongheadedly using “massive pressure” to deter business leaders from attending an economic conference that the administration is organizing this month in Bahrain, where it hopes to impress upon them the financial windfalls they can expect if they embrace the administration’s peace plan.

And he said that the long-awaited Trump peace plan was aimed at improving the quality of life for Palestinians but was unlikely to lead quickly to a “permanent resolution to the conflict.”

But it was on annexation that Mr. Friedman’s remarks were likely to be read most closely. Mr. Netanyahu promised just before Israel’s April 9 election to begin annexing part of the West Bank, which Israel captured in 1967.

Much of the world considers Israeli settlements there illegal and would view annexation as compounding the crime. Israeli critics, including a group of respected former military and national-security officials, warn that annexation could lead to violence and require the military to occupy Palestinian urban areas for the first time in decades.

He accused the Obama administration, in allowing passage of a United Nations resolution in 2016 that condemned Israeli settlements as a “flagrant violation” of international law, of giving credence to Palestinian arguments “that the entire West Bank and East Jerusalem belong to them.”

“Certainly Israel’s entitled to retain some portion of it,” he said of the West Bank.

Mr. Friedman, 60, who before taking his post was Mr. Trump’s top bankruptcy lawyer and a generous supporter of the Israeli settlement enterprise, is said to be a driving force within the administration’s Middle East team, which also includes Jared Kushner, Mr. Trump’s son-in-law and senior adviser, and the special envoy Jason Greenblatt, a former in-house counsel at the Trump Organization.

In the interview, he accused Palestinian politicians of trying to sabotage the Bahrain conference.

“It’s unfair the way the Palestinians have described this as a bribe or as an attempt to buy off their national aspirations,” he said. “It’s not at all. It’s an attempt to give life to their aspirations by creating a viable economy.”

He insisted that Palestinian businesspeople would attend the conference were it not for “massive pressure” from Palestinian officials to intimidate them from attending.

“There is almost no Palestinian business leader that wants to refrain from meeting with some of the largest sovereign wealth funds in the world, when the topic of the discussion is limited to giving money to the Palestinians,” he said. “I know firsthand, they want to come.”

Likewise, he said there was a “silent majority” of Palestinians who would jump at the Trump peace plan if not for the “real-life consequences” they could face from repressive West Bank officials.

The Trump administration has not publicly presented its peace plan, but it has portrayed the Bahrain conference as a prelude to the plan’s first phase, which would focus on economic development of the occupied territories. It would be followed by a second phase focused on a political solution

Palestinian leaders have rejected the idea, saying there can be no economic peace without a political solution, and that they do not trust any plan from the Trump administration, which has taken actions to favor Israel in the conflict. They also deny that they have pressured businesspeople to boycott the Bahrain conference. 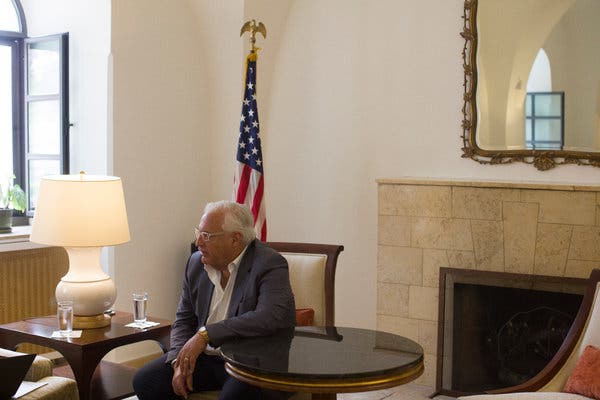 Israel “has the right to retain some” of the West Bank, Ambassador David M. Friedman said in an interview at his Jerusalem residence.CreditIlia Yefimovich for The New York Times

A major American supporter of the Israeli settlement enterprise before his appointment, Mr. Friedman has seldom been accused of being evenhanded as ambassador. Asked if he shared the view of many right-wing Israelis that Palestinians bore the brunt of the blame for the failure to reach a settlement of the conflict, he said, “There’s more blame on the Palestinian side,” but allowed that Israel had “made its own mistakes.”

“There were some extraordinarily generous proposals made to the Palestinians that they turned down,” he added.

He had harsh words for the Palestinian Authority, saying it had “a very, very poor track record on human rights” and that its institutions “don’t give anyone in the region sufficient comfort that Palestinian autonomy is not threatening.”

“The Palestinian leadership is really the difficulty right now,” he said.

He defended what has been an all-stick, no-carrot approach to the Palestinians. He said this was “reality-based” and responsive to hostile Palestinian rhetoric and actions. “They brought those sticks upon themselves,” he said, noting that he had been called a “son of a dog” by the Palestinian Authority president, Mahmoud Abbas.

For too long such offenses met with “acquiescence” in Washington, he said. “We’re saying, no, that’s not cool. We call it out.”

He urged the Palestinians instead to “look inward,” saying the Trump administration’s toughness toward them was meant to signal that “the world isn’t going to stop turning” and that they did not “have a veto on progress.”

He said the Palestinians had benefited, for example, from the view that they needed to agree before the United States could recognize Jerusalem as Israel’s capital.

That, he said, gave them “an amount of leverage that makes it almost impossible to negotiate a deal.”

Under the Oslo Accords, the Palestinians and Israel agreed that the status of Jerusalem would be negotiated by both parties in a final peace agreement.

Mr. Friedman said the push for a peace plan was motivated by the belief that the dangers confronting Israel — in Lebanon, Syria, Gaza and Iran — were far greater than when the Oslo peace process began in the early 1990s. “The absolute last thing the world needs is a failed Palestinian state between Israel and Jordan,” he said.

He said he did not believe the plan would promote a violent reaction among the Palestinians, and said the United States would coordinate closely with Jordan, which could face unrest among its large Palestinian population over a plan perceived as overly favorable to Israel.

He added that the plan would not be released if the administration believed it would do more harm than good. “We don’t want to make things worse,” he said. “Our goal is not to show how smart we are at the expense of people’s safety.”

As for whether the plan envisions a Palestinian state, he said, “What’s a state?”

Israel retaining security control in the West Bank should not be an impediment, he argued: Just as American troops are stationed in Germany, Japan and Korea, “places where we were at war with that nation before we left our troops there,” he said, “having boots on the ground is not antithetical to peace.”

He said he did not know when the plan would be released, but would welcome the chance to promote and defend it.

“Maybe they won’t take it, maybe it doesn’t meet their minimums,” he said. “We’re relying upon the fact that the right plan, for the right time, will get the right reaction over time.”

But he did not chart a clear path to a deal given the likely resistance of Mr. Abbas. “It has to capture the imagination of the Palestinian people,” Mr. Friedman said. “Then things have to just take their course.”

Asked what that meant, he reached for a comparison to corporate restructuring, his legal specialty.

“We would put out a plan, and everybody would scream and yell and say this is no good, that’s no good,” he said. “And if you took everybody’s views at face value you’d just put it back in the drawer and curl up into a ball. But that’s not the way the world works.”

People will “posture” and “complain,” then analyze and “poll their people,” determine their options, and try to get a “more palatable” offer, he said.

“I’ve solved some pretty insoluble problems over my career,” he said, “and that’s how they get solved.”