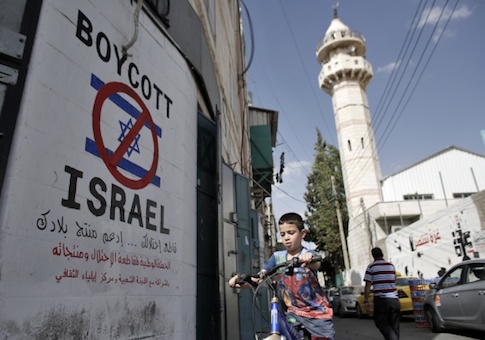 Leading lawmakers in Congress are warning the European Union that issuing a mandate that Jewish products made in contested areas of Israel carry consumer warning labels could trigger American anti-boycott laws and jeopardize U.S. trade with Europe.

The European Court of Justice (CJEU) is expected to issue an opinion this week on a long-running case brought by an Israeli winery challenging a requirement that Israeli-made products be labeled as coming from "settlements" and "Israeli colonies."

The decision is expected to be issued early Tuesday and follows a recent opinion by the E.U. court's advocate general stipulating that European law requires these Jewish-made products to be labeled. Critics said the law is reminiscent of Nazi-era boycotts of Jewish products and have viewed such requirements as a win for the anti-Semitic Boycott, Divestment, and Sanctions movement, or BDS.

Ahead of the decision, Senator Bob Menendez (D., N.J.) petitioned E.U. ambassador to the United States Stavros Lambrinidis to raise concerns about a potential ruling in favor of the warning labels and said it could create policy tension with the United States.

Senators Benjamin Cardin (D., Md.) and Rob Portman (R., Ohio) sent a similar letter to U.S. trade representative Robert Lighthizer expressing concerns that the ruling holds Israel to a standard no other country is subjected to.

Rep. Juan Vargas (D., Calif.) sent a letter to U.S. ambassador to the European Union Gordon Sondland warning that the ruling would lead to discrimination against Israel.

The lawmakers also said such a ruling could trigger multiple U.S. anti-boycott laws and damage the nearly $1.3 trillion in trade between America and the E.U.

"The regulation in question is problematic for a number of reasons, including because it targets specific businesses based on the ethnicity and national origin of their owners," Menendez wrote in the letter he sent to Lambrinidis.

Menendez described the pro-BDS effort as an act of discrimination against Israel and Jews and said the ruling could open a "Pandora's Box" of labeling litigation.

"I am deeply concerned that if the CJEU decision empowers the EU to require or allow its Member States to label Israeli and Palestinian products in the manner proposed, it will allow and encourage the politicization of EU rules of origin labeling with potential adverse unintended consequences, including by opening the door to near-unlimited use of ‘ethical considerations' in food labeling which would enable Member State protectionism and nationalism, and be unhelpful for the EU single market," Menendez wrote.

The lawmakers warn that if American anti-boycott laws are triggered by the decision, it will elevate tensions between the United States and E.U.

"If these unfair requirements are mandated or allowed by the CJEU, European countries would be forced to choose whether to single out the world's only Jewish state for distinct, defamatory treatment, and thereby create policy tensions with the United States, or to continue to delay implementation while finding an appropriate approach," Menendez wrote in a letter that strikes a similar tone to the other congressional missives.

A decision mandating the labeling of Jewish goods also would be seen as an effort by the E.U. to interfere in Israeli-Palestinian peace talks.

"The U.S. Federal Government and many U.S. states have enacted strong anti-boycott provisions that impose severe penalties and restrictions on companies that participate in boycotts or other economic pressure campaigns against Israel," Menendez wrote. "If the CJEU decision empowers the EU to mandate or allow Member States to implement such labels which target Israeli businesses and exports there will be serious and far-reaching implications and unintended consequences."