Professor Raphi Israeli spoke at an ICJS function Sunday night 11th March at Beth Weizmann. We had about 360+ people in a packed out hall. All people who didn't book (probably 30-40 people) had to be turned away.

And yet the boycott of Raphi here in Melbourne meant that not a single representative of the media was present. A pair of lonely representatives of Jewish Community Organisations were present in the persons of Dr Danny Lamm and Rabbi John Levi. But even they were simply attending as private individuals. It was eerie. It was almost like a huge private function.

We - you - who use the internet to propagate messages need to send a message to our Community Organisations / Leaders / Press that we expect more responsiveness from them than they are currently giving.

Audio of last night's lecture is now available here: (and also at the bottom of this page).

Also, you can download an MP3 of Professor Raphi Israeli lecture here. 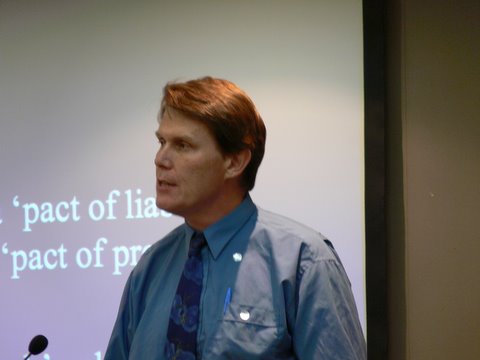 Reverend Dr Mark Durie gave a detailed and concise presentation of the Dhimma pact as it was in traditional form, and how it is now slowly being re-instated stealthily around the globe.

In essence, reduced to a single question, he asked: Why do non-muslims have to do the PR for Muslims? Are Jews expected to say that Christianity is a wonderful religion? Are Christians expected to say to the world that Judaism is a wonderful religion? Why then do people such as George Bush, Mary Robinson and countless others have to go on-record telling us that Islam is the religion of peace, Islam has made enormous contributions to our society etc etc.

Mark explains this in terms of an ancient religious / cultural requirement within Islam for non-muslims to acknowledge the superiority of Islam. This is part of the Dhimma pact which provides protection for non-muslims from Islamic Jihad. 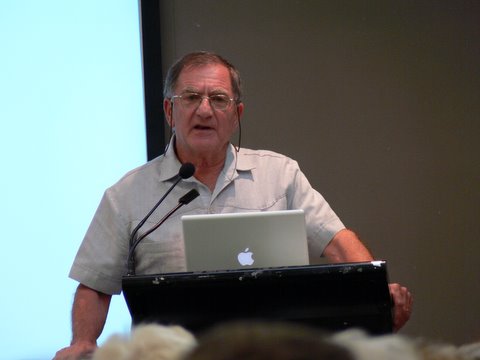 Prof Israeli spoke about how Islamic individuals were encouraged after WWII to provide manpower for a severely depleted workforce. They came largely from the French, Dutch and African colonies. He explained how the situation evolved from individuals to whole communities, eventually resulting in the importation of Imams to deal with their religious needs.

However, the Imams taught (quite correctly within the structure of Islam) that all institutions of society have to be based on the Sharia, and anyone who thinks he can improve on the Sharia is considered a blasphemer. This is the core of a clash.

Then Prof Raphi Israeli spoke about the theoretical foundations of democracies - that sovereignty is with the people. Also he dealt with the pragmatic manifestations of democracy - a parliament, an opposition, a smooth transition from one administration to the next after an election. And he made a convincing case that all of these structures are foreign to Islam, where the Koran is the only source of authority. Fundamentally anyone who claims that "man" (forgive the genderist term) is a source of authority is a blasphemer.

This dovetailed well with what Prof Israeli said at a private function on Friday night, that the whole concept of "democratisation" is phoney. It would be like "pregnantisation" - the notion that you become pregnant gradually. A country is either democratic or not. Conditions conducive to democracy can be put in place, but that does not constitute democracy or democratisation.

Here is a podcast:

Thank you ICJS for developing your website. It is becoming an important resource.

Living in Sydney I was unable to attend the lecture but nonetheless appreciation to ICJS is in order for them giving Prof. Israeli a forum to speak when so many other avenues were shamefully shut on him. I fully agree with the statement by Ronit Fran Ralph about how we need to send a message to our community organisations/ leaders and press, as well as the politicians of all major parties that we expect far more from them,for they are currently shirking their duty. Todah rabba.

Mazal Tov ICJS on showing our so called community leaders and media what real leadership is all about!

yashar koach it was very good thank you

Kol hakavod for Sunday night's talk. It was so informative interesting and funny.

Your constant work and efforts to continuously improve your ICJS website contents and accessibility has been fruitfull. It has been rewarding to visit your website and receive your emails. Your choice of the articles you present in your emails and website, shows your deep interest and accurate assessment of the world situation regarding global jihad. It is hard to imagine the enormous amount of time and efforts you have spent also to prepare and present the important lecture of yesterday the 11th March 2007 at Beth Weizmann. 'THE GROWTH OF ISLAM IN EUROPE AND ITS EFFECT ON WESTERN DEMOCRACIES' was crucial for a better understanding on this frightening reality which many keep denying. The combination of speakers- Dr Mark Durie and Professor Raphi Iraeli -was perfect in that they completed each other's presentation on different aspects of the Islamist threat. Dr Mark Durie's extensive knowledge in Islamic laws and particularly on Dhima-dhimmitude added to his concise, clear and sound explanations brought much light on the subject. Professor Raphi Israleli lightened the seriousness of the Islamist threat with his wonderfull sense of humour and witt which made it more palatable for the listeners. I was deeply touched by your well deserved success with the premises completely taken (with many standing and others sitting on the floor) by a very interested public. Thank you for your dedication in bringing awareness to the public on the dangers that terrorism and global jihad represent for our Western civilisation.

I attended the Prof. Israeli lecture Sunday night and was impressed and would like to be kept up to date with the issues aired on that occasion. For your interest. I have included the text of a letter I wrote to The Age in response to a series of abusive and hysterical letters published in the Letters section during the conflict with Hizbullah ....

Dear friends, I wish to congratulate you for organising such a successful public meeting. Well done!

Hey guys, It was a great event. Well done! Mark was a brilliant addition. Your info sheet excellent. I felt so proud for you. Much love

First of all, what a fantastic evening it was last night. Thanks to all of you at ICJS who put in so much work. I thought Mark Durie's PP presentation was very impressive - should be shown everywhere, especially on campus and the other homes of the cultural elite! Prof Israeli was excellent and even managed to interject jokes despite it being such a serious subject.

Thank you ICJS for expanding your activities beyond the internet. To have both Prof Israeli and Dr Durie in the same room was a scoop. I was glad for the opportunity to hear them. Last nights meeting exposed many issues, not least of which is the threat to the survival of Western Democracy. I venture to suggest that community leaders were present albeit not formally recognised as such.