Palestinians - the Mafia of destruction

Question: How do Palestinian patients obtain permits to receive medical treatment in Israeli and other hospitals around the world? Answer: By paying bribes to senior Palestinian officials in the West Bank and Gaza Strip. Those who cannot afford to pay the bribes are left to die in under-equipped and understaffed hospitals, especially in the Gaza Strip.

Yet, apparently some Palestinians are more equal than others: Palestinians whose lives are not in danger, but who pretend that they are. These include businessmen, merchants, university students and relatives of senior Palestinian Authority (PA) and Hamas officials, who receive permits to travel to Israel and other countries under the pretext of medical emergency.

Many Palestinians point a finger at the PA's Ministry of Health in the West Bank. They argue that senior ministry officials have been abusing their powers, in order to collect bribes both from genuine patients and from other Palestinians who only want medical permits in order to leave the Gaza Strip or the West Bank. Thanks to the corruption, many real patients have been denied the opportunity to receive proper medical care in Israel and other countries. 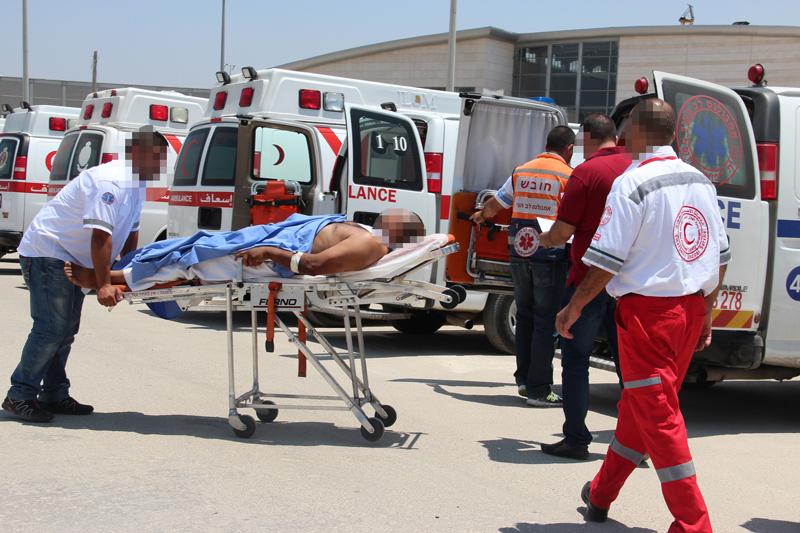 A Palestinian man is transferred to an Israeli ambulance at the Erez crossing between the Gaza Strip and Israel, on his way to an Israeli hospital, July 29, 2014. (Image source: Israeli Foreign Ministry)

This, of course, does not apply to senior Palestinian officials and their family members, who continue to make ample use of Israeli hospitals and other medical centers in Jordan, Egypt, the Gulf and Europe.

Haniyeh, however, did not need to offer cash to get his daughter and sister medical treatment in Israel. Indeed, some Palestinians are evidently very much more equal than others.

The corruption in the Palestinian health system, both in the West Bank and Gaza Strip, has long been a well-known secret. Palestinians without the right connections and without money to hand over to a senior official or physician are fully aware that they would never be allowed to receive what is called "medical referrals abroad." The signature of a physician or a senior health official is the most precious merchandise in the West Bank and Gaza Strip. This signature allows patients to receive free medical treatment in Israel and various countries.

The absence of clear regulations to define who is entitled to this privilege have facilitated widespread corruption in the Palestinian health system. Nepotism plays a major role in this form of corruption. The relative of a senior Palestinian official can easily be transferred for treatment in an Israeli, Jordanian or Egyptian hospital, while poor patients from the Gaza Strip can wait months and years before obtaining such permits.

Hamas and PA officials are trading with the lives of Palestinian patients. They have turned medical care into a business that earns them hundreds of thousands of dollars per year. This corruption, in the absence of transparency and accountability, has also enabled top officials in the West Bank and Gaza Strip to embezzle millions of shekels from the PA budget.

Although both the Palestinian Authority and Hamas have vowed to combat this exploitation of Palestinian patients, the Palestinians themselves report no improvement. They say that more than 70% of the cases of medical referrals to Israeli hospitals and abroad have never been documented, and it remains unclear how and where the money was spent.

In 2013, for instance, the PA spent more than half a billion shekels covering medical bills of Palestinians who were referred to hospitals outside the Palestinian territories. However, no one seems to know exactly how the money was spent and whether all those who received the referrals were indeed in need of medical treatment.

The PA maintains that in 2014, more than 54,000 Palestinians from Gaza received medical referrals for treatment outside the Strip. Health officials in the Gaza Strip, however, say they are aware of only 16,382 documented cases of real patients who received such permits.

Between 1994 and 2013, the Palestinian Authority did not ask Israeli hospitals for detailed bills of the medical treatment provided to Palestinian patients. The money is deducted on a monthly basis from tax revenues collected by Israel and later paid to the PA.

The Coalition for Accountability and Integrity (AMAN), a Palestinian group working in the fields of democracy, human rights and good government, to combat corruption and enhance integrity, principles of transparency and systems of accountability in Palestinian society, is one of the few bodies sounding an alarm bell about this abuse.

Last year, AMAN released a report in which it warned against corruption in the Department of Medical Referrals Abroad, which belongs to the PA Ministry of Health. The report pointed out discrepancies in the costs of medical treatment in Israeli and other hospitals, and the actual bills. For example, in one case it appeared that 113 Palestinian patients had been admitted to Israeli hospitals at the cost of 3 million shekels, while there is no documentation of any of these cases. Even the identities of the patients remain unknown.

The AMAN report stated that measures taken by Palestinian health officials to limit nepotism and bribes, and prevent the squandering of public funds, have been insufficient. Physicians, it said, faced pressure from Palestinian Authority officials to issue medical referrals to Israeli hospitals and other hospitals around the world, even to those not in need of them. Some of the cases, the report notes, could have been treated in Palestinian hospitals, and there was no need to transfer them to other hospitals at very high costs.

The PA says that it has asked its Anti-Corruption Commission to investigate the scandal. To date, it remains unclear whether substantive measures have been taken against those responsible for the corruption.

Hamas, for its part, continues to hold the PA responsible for the misery of patients in the Gaza Strip. The Islamist movement claims that the PA government is withholding the issuance of medical permits as a means to punish Palestinians for their support of Hamas.

The truth, however, is somewhat different: health officials in the Gaza Strip who are linked to Hamas have also been exploiting the plight of patients. Hamas is uninterested in this coming to light.

Hajer Harb, a courageous Palestinian journalist from the Gaza Strip, recently prepared an investigative report about the corruption of health officials in the West Bank and Gaza Strip. She has been repeatedly interrogated by Hamas.

Harb says she is now facing charges of "slander" for exposing the corruption. She was told by her interrogators that the decision to summon her for investigation came after a physician in the Gaza Strip filed a complaint against her for "defamation."

Hamas interrogators demanded that Harb reveal her sources and the identity of those involved in the corruption scandal. "I told them that I am a journalist and I cannot provide them with the identities of my sources without a court order," she said.

"The prosecution told me that I was facing the following charges: impersonation of another person (they claim I did not reveal my real identity during the investigative report); slandering the Ministry of Health, publishing inaccurate and incorrect information and working with 'foreign parties' (by preparing a report for a London-based television station under the pretext that the media organization is not registered with the Press Office in the Gaza Strip)."

In her report, Harb wrote about the middlemen who obtain medical referrals to Israeli and foreign hospitals in return for bribes. She approached one of the middlemen and claimed she wanted to travel from the Gaza Strip to the West Bank to marry a man living there. She wrote that she received a permit to leave the Gaza Strip and receive medical treatment in East Jerusalem's Al-Makassed Hospital after she paid a bribe to a local physician. She also found several forged medical referrals in the name of the son of a senior Palestinian official in the Gaza Strip, who obtained them in order to complete his studies in the West Bank. Harb further located a man who claimed that he works for the PA's Preventative Security Service and who boasted that he could get a permit for medical treatment outside the Gaza Strip in return for $200. Another Palestinian bought a medical permit to leave the Gaza Strip and work in a restaurant in Ramallah.

Hamas claims to be combating the corruption of officials who are tampering with the lives of Palestinian patients. In reality, it is busy harassing journalists who speak the truth. The Palestinian Authority regime, for its part, is not too happy with exposure about the scandal.

The Palestinian Journalists Syndicate (PJS), based in the West Bank, condemned Hamas for harassing Harb. But this critique should be seen more in the context of the power struggle between the PA and Hamas, rather than as stemming from a concern for public freedoms.

In a statement, the PJS criticized Hamas for interrogating Harb as a "grave breach of media work and freedom of expression" in the Palestinian territories. The syndicate emphasized the right of journalists not to reveal the identity of their sources, adding that Harb had abided by all moral, legal and professional standards.

Najat Abu Baker, a member of the Palestinian Legislative Council who belongs to PA President Mahmoud Abbas's Fatah faction, was one of the few politicians in the West Bank who dared to come out against the corruption scandal.

In her words, the corruption in the PA's Department of Medical Referrals has transformed it into a "real mafia headed by influential figures." Abu Baker accused the ministry of exploiting the impoverished residents of the Gaza Strip and wasting public funds:

"The issue of medical permits has become a business and the only ones who are paying the price are the patients from the Gaza Strip. Hundreds of these patients who have died are the victims of the ministry's measures."

She called for a commission of inquiry into the corruption scandal. She noted that many patients from the Gaza Strip have died while waiting for medical referrals while others, who were not ill, were given the permits thanks to nepotism and bribery.

"The merchants of death are tampering with the fate of our patients. It is time to tell the truth so that we can get rid of the mafia of destruction and end their trade in the lives of our patients."

The medical permit scandal is yet further proof that Hamas and the Palestinian Authority shamelessly exploit their people for political and financial purposes. The PA leverages its power to issue medical permits in order to pressure Palestinians in the Gaza Strip to turn against Hamas. Its officials sell the permits for cold hard cash. Hamas, which continues to hold the entire Gaza Strip hostage, has its own ideas about how money is well spent. Gaza's hospitals would be rather better equipped if Hamas used the money it has to build medical centers instead of tunnels for smuggling weapons from Egypt to attack Israel. While medical permits are sold to the highest Palestinian bidder, we ask: What is the going rate for a permit for clarity concerning the behavior of Palestinian leaders?