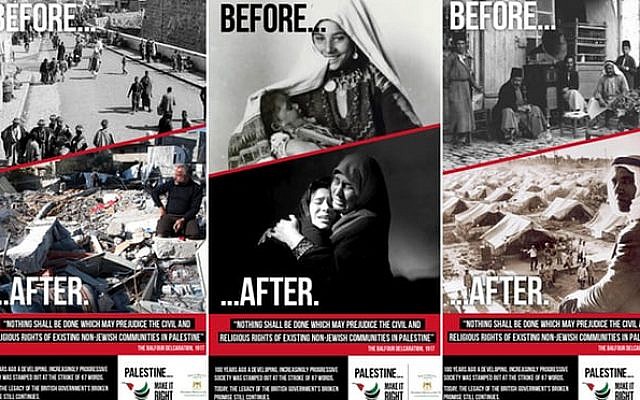 The London underground has banned a Palestinian poster campaign marking 100 years since the signing of the 1917 Balfour Deceleration in which the British government declared its support for establishing a Jewish state.

Transport for London (TfL) said the banners, which were to be displayed at main underground stations and on buses ahead of the November 2 centenary, did not meet guidelines that ban “images or messages which relate to matters of public controversy or sensitivity,” the Guardian reported on Tuesday.

The poster campaign, titled “Make It Right,” was organized by the Palestinian Authority representative to the UK.

Posters contrast images of life in British-mandated Palestine before 1948 with those taken since the establishment of the Jewish state in that year and carry the quote from the Balfour Declaration saying “nothing shall be done which may prejudice the civil and rights of existing non-Jewish communities in Palestine.” 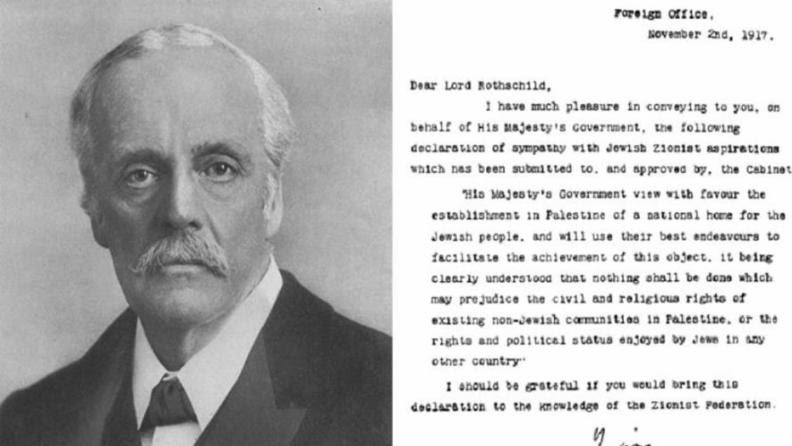 Signed on November 2, 1917, by the UK’s then foreign secretary, Arthur James Balfour, the declaration announced his government’s intention to establish “a national home for the Jewish people” in the Land of Israel.

It was seen as giving the Zionist movement official recognition and backing on the part of a major power, on the eve of the British conquest of the then-Ottoman territory of Palestine.

“Palestinian history is a censored history,” he said. “There has been a 100-year-long cover-up of the British government’s broken promise, in the Balfour declaration, to safeguard the rights of the Palestinians when it gave away their country to another people,” he said, adding that “here may be free speech in Britain on every issue under the sun but not on Palestine.”

According to the report, an identical poster was permitted for display at Westminster underground station last year as a promotion for the 2017 campaign.

The posters will still be displayed on taxis that have looser advertising rules. Organizers will arrange for the taxis to drive near events celebrating the centenary, the Guardian reported.

In February, the Balfour Apology Campaign, run by the Palestinian Return Center rights group, launched a petition on the British parliament website calling on Britain to “openly apologize to the Palestinian people for issuing the Balfour Declaration. The colonial policy of Britain between 1917-1948 led to mass displacement of the Palestinian nation.”

In April the UK Foreign Office posted a response to the petition. “The Balfour Declaration is an historic statement for which HMG (her Majesty’s Government) does not intend to apologize,” the response began. “We are proud of our role in creating the State of Israel. The task now is to encourage moves towards peace.”

The first in a series of events to mark the 100th anniversary of the Balfour Declaration was held in the British Houses of Parliament in November 2016 and was attended by a number of British lawmakers, Israeli Ambassador to the UK Mark Regev and former Foreign Ministry director-general Dore Gold.

British Prime Minister Theresa May, in a September 2016 greeting ahead of the Jewish New Year, hailed the Balfour Declaration as an expression of the “UK’s support for the establishment of a national home for the Jewish people.”Prime Minister Benjamin Netanyahu is scheduled to join May at a celebratory dinner in London later this year to mark the centenary.

Prime Minister Benjamin Netanyahu is scheduled to join May at a celebratory dinner in London later this year to mark the centenary.

Times of Israel staff contributed to this report.