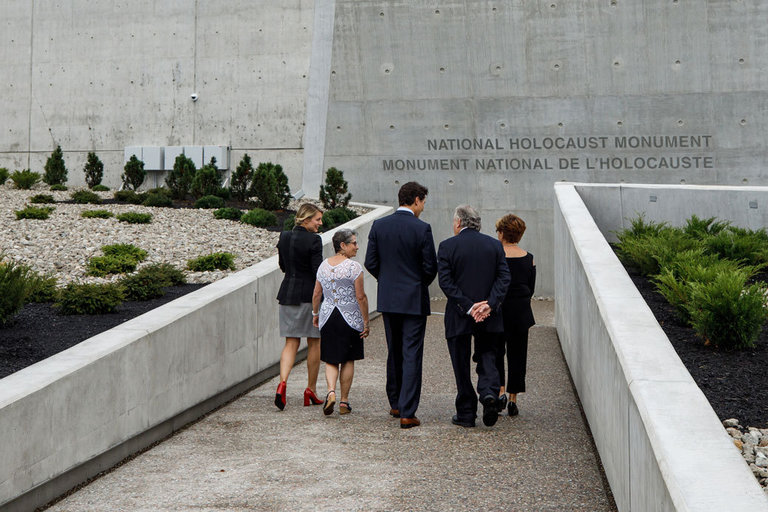 The architecture of Canada’s new National Holocaust Monument in Ottawa is both symbolic and haunting, with six concrete triangles depicting the stars that Jews were forced to wear in Nazi Germany, and that marked millions of them for extermination during World War II.

But while the structure’s design embodies Jewish suffering during the Holocaust, a plaque placed outside it failed to mention Jews or anti-Semitism, an omission that has drawn furious criticism.

The plaque outside the memorial — the country’s first national Holocaust monument, 10 years in the making and inaugurated by Prime Minister Justin Trudeau last week — paid tribute to the “millions of men, women and children murdered during the Holocaust” and the “survivors who persevered and were able to make their way to Canada after one of the darkest chapters in history.”

The omission of any mention of Jews in the inscription was immediately seized upon by opposition politicians, rights advocates and the Israeli news media. Some groups turned to social media to express criticism. The plaque was removed.

David Sweet, a lawmaker from the opposition Conservative Party, asked Canada’s Parliament, “How could the prime minister permit such a glaring omission of reference to anti-Semitism and the fact that the millions of men, women and children who were murdered were overwhelmingly Jewish?” He added: “If we are going to stamp out hatred of Jews, it is important to get history right.”

Nick Ashdown, a Canadian journalist, wrote on Twitter that not mentioning Jews on the plaque was a “profoundly stupid omission,” even as he noted that “the 5 million non-Jews killed in Holocaust — Slavs, Roma, gay people, priests, disabled, communists & anarchists, etc. — are often forgotten.”

Responding to the criticism, Canada’s heritage minister, Mélanie Joly, ordered that the plaque be removed and stressed that the monument commemorated “the six million Jews, as well as the five million other victims, that were murdered during the Holocaust.”

A new plaque is expected to be unveiled.

Canadian news reports suggested that the omission had been unintentional. The outcry recalled the controversy earlier this year in the United States when the White House failed to specifically mention Jews or anti-Semitism in a statement to commemorate International Holocaust Remembrance Day. That statement spoke of the “victims, survivors, heroes of the Holocaust.”

Reince Priebus, then the White House chief of staff, defended the statement saying, “I mean, everyone’s suffering in the Holocaust, including, obviously, all of the Jewish people affected and the miserable genocide that occurred — it’s something that we consider to be extraordinarily sad.”

Amid accusations that his administration was not doing enough to fight anti-Semitism and was courting the white nationalist far right, President Trump made an unequivocal statement on the issue four months later during an annual Holocaust remembrance ceremony at the Capitol in April.

Canada’s National Holocaust Memorial was designed by Daniel Libeskind, the Polish-American architect responsible for Berlin’s Jewish Museum and the master plan for the World Trade Center site in New York. His company, Studio Libeskind, says on its website that the Canadian memorial depicts the points of a star, which “remains the visual symbol of the Holocaust — a symbol that millions of Jews were forced to wear by the Nazis to identify them as Jews, exclude them from humanity and mark them for extermination.”

The triangular spaces, Studio Libeskind says, represent the badges that Nazi Germany used to identify the other groups of people who were held in camps and ultimately murdered, among them gays and lesbians, Roma and Jehovah’s Witnesses, socialists and trade unionists.

Mr. Trudeau spoke specifically about anti-Semitism during his emotional inauguration of the memorial, which was attended by Holocaust survivors. He said that Canada reaffirmed “our unshakable commitment to fight anti-Semitism, racism, xenophobia and discrimination in all its forms, and we pay tribute to those who experienced the worst of humanity.”

According to Canadian news reports, the government has also been discussing plans to apologize for the decision in 1939 to refuse admission to the M.S. St. Louis, a ship with more than 900 German Jews who fled the Nazis and had hoped to receive asylum in Canada after being turned away by Cuba and the United States.

Alluding to the episode during his speech, Mr. Trudeau said, “May this monument remind us to always open our arms and our hearts to those in need.”