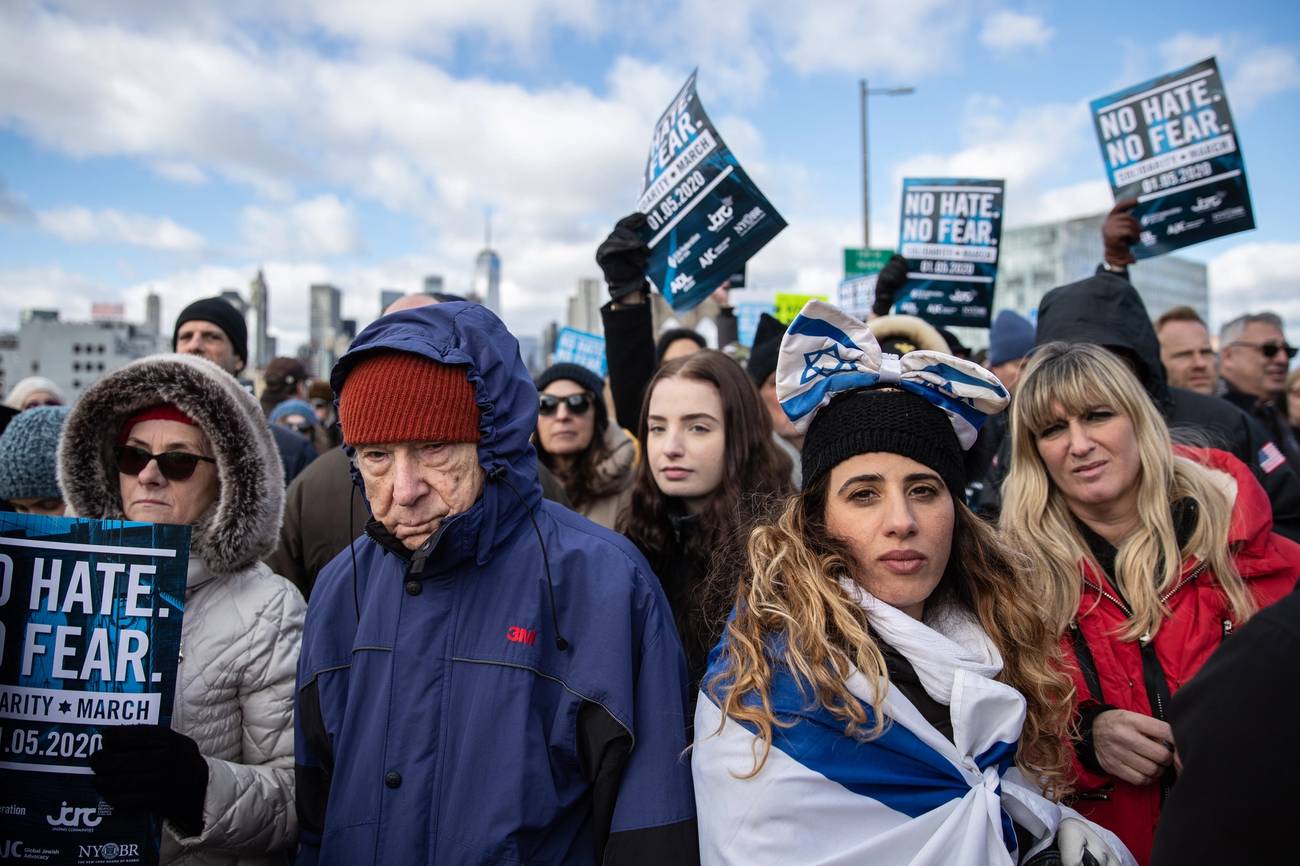 People participate in a Jewish solidarity march across the Brooklyn Bridge on Jan. 5, 2020. The march was held in response to a recent rise in anti-Semitic crimes in the greater New York metropolitan area.Jeenah Moon/Getty Images

American Jews have been reminded that the world’s oldest hatred almost never totally disappears, even in places where Jews are largely assimilated and communal life feels settled. During Donald Trump’s presidency, lunatics of various ideological stripes have launched deadly assaults on synagogues, kosher grocery stores, and Hanukkah parties, while a wave of dozens of physical attacks on Jews in New York City appeared to have no overt political motive. Multiple left-wing members of Congress support the BDS movement; on the right, the president has made uneasily frequent—though not outwardly hostile—mentions of Jewish money and political power and been less outwardly condemnatory of white supremacy than the overwhelming majority of American Jews would have liked. The alleged anti-Semitism of campus Israel haters, identitarian right wingers, mentally disturbed passersby, and actual members of the federal government jostle for room within a frayed American Jewish psyche.

Last year, the American Jewish Committee commissioned a poll aimed at understanding how American Jews perceived these various threats against them. This year it repeated the exercise, while also polling the general public on its views on American anti-Semitism. The results are worth examining.

Jews overwhelmingly believe that America is becoming a more anti-Semitic and physically dangerous place for them to live, work, and study: 82% responded that anti-Semitism has increased over the past five years. Some 27% reported that Jewish institutions with which they affiliated had “been the targets of anti-Semitism” since the October 2018 massacre at the Tree of Life synagogue in Pittsburgh; 37% reported that they had “taken steps to conceal their Jewishness in public” since that attack. Meanwhile, 43% of Jews between the ages of 18 and 29 had “experienced anti-Semitism on a college campus over the past five years.”

American Jews are center-left in political orientation—the latest polling suggests that over 70% of them will vote for Joe Biden next week. Thus, the AJC’s findings about the perceived bipartisan nature of anti-Jewish hate reflects a certain fatalism, while also breaking down along lines of party affiliation: While 69% of respondents agreed that the Republican Party holds at least some anti-Semitic views, a not-insignificant 37% said the same about the Democrats.

One of the poll’s relative surprises is that BDS, which is almost exclusively a left-wing phenomenon, and which has vocal fans among growing Democratic Party constituencies, is viewed as either being anti-Semitic or having anti-Semitic supporters among a whopping 80% of Jewish respondents. While the statement “Israel has no right to exist” has adherents on both extremes of the political spectrum, it is mostly heard in left-wing quarters these days; 85% of Jewish respondents agreed it was anti-Semitic.

Interestingly, 74% of the general public agreed with the 85% of Jews who view anti-Zionism as inherently anti-Semitic, with near identical numbers of Republicans (74%) and Democrats (73%) sharing this view, which is often painted in left circles as a uniquely Jewish or “right-wing” position.

The findings hint at a sharpening awareness of anti-Semitism among Jews, who are sensitive to the potentially hateful motives behind American political rhetoric, hard-line anti-Israel activism, and the everyday behavior of their fellow citizens. Why else would one conceal outward signs of their Judaism unless they sensed some real danger around them?

Perhaps the most troubling aspect of the AJC poll is that it suggests that however threatened Jews may feel, they shouldn’t count on the rest of the country to recognize or sympathize with their predicament. Only 43% of the general public agreed that anti-Semitism is getting worse, trailing the Jewish total by 39 percentage points. “A large majority of Americans would not defer to Jews in evaluating whether or not something is anti-Semitic,” the poll reported: “Nearly two thirds of respondents (65%) said it would make no difference to them if a Jewish individual or organization considered a statement or idea to be anti-Semitic.” Moreover, only a quarter said that a Jewish accusation of anti-Semitism would make them more likely to consider something anti-Semitic; 7% said that such an accusation would actually make them less inclined to such a view.

Among Jews, there is surprisingly little disagreement about the broad and growing extent of anti-Semitism in America. The challenge resides in convincing the 98% of Americans toward whom the country’s Jews are growing ever warier. The gap between Jewish and non-Jewish perceptions of anti-Semitism is natural, more a reminder of the need for empathy, persuasion, and relationship-building than an indictment of our fellow citizens. And yet the gap remains, in a time when Jews sense that their position in American society is becoming less secure.