We wish to bring to your attention our great concern over the current situation of the Jewish Community of Venezuela.

Historically, the people of Venezuela welcomed with open arms immigrants from everywhere without any expression of xenophobia or racism. All ethnic and religious communities traditionally enjoyed peaceful co-existence at all times, and Venezuela's Jewish Community - dating from the days of Simon Bolivar – was no exception.

In the past, as today, several Venezuelan governments have expressed their solidarity with the Palestinian cause or the Palestinian people. However, since the events in Gaza that began on December 27 2008, the present government of Venezuela has adopted an aggressive and dangerous tone never previously heard, clearly inciting against the Jewish Community. The Government's supporters nationwide picked up on the Government's lead with clearly anti-Semitic expressions – with no effort whatsoever by Government to stop them. The expulsion of the Israeli Ambassador followed, and subsequently, a final breaking off of diplomatic relations.

Furthermore, there is a well-orchestrated campaign on TV, radio, print and Internet media owned by the government, openly questioning Israel's right to exist, even including publication of such anti-Semitic materials as The Protocols of the Elders of Zion. A group of pro-government journalists is urging the population to boycott businesses owned by Jews in Venezuela.

Thanking you in advance for all your efforts, 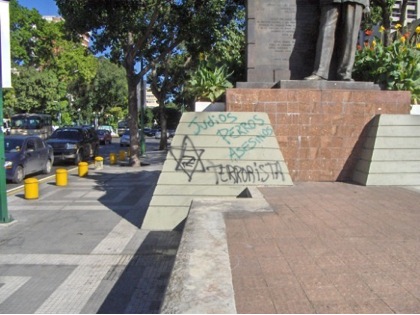 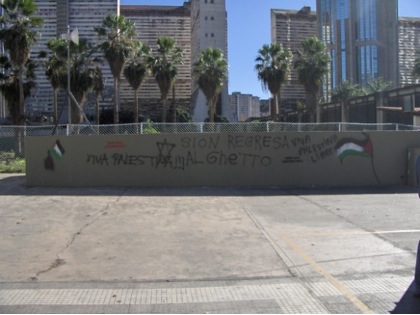 "Hail to Palestine – Zion: return to the ghetto. Hail to a Free Palestine! " 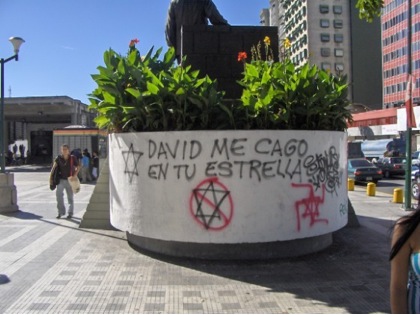 "David the hell with your star"

Thanks Ron, and no I dont know of Pastor Niemoeller, and yes we must be careful.. However if they had of stood up for morals 30 years ago we would not perhaps be in this position now.. Haifadiarist, I am so glad to hear you say that Christians and Jews are starting to stand up, I get to the stage sometime where I wonder why do I keep hitting my head against a brick wall.. But then I feel that I have to keep going.. and to have such encouragement like this that people are waking up helps us to keep going eh.

In many areas of the world Jews and Christians are beginning to stand up and be counted. It is only a beginning, more and more must join this trend otherwise we just let the Islamists gain all the publicity

Gaye, I realise that, but we cannott afford to make the same mistakes as Germany an pre war (remember Pastor Niemoeller?) The church is not a club but a belief system for a better and more just world. And let us not forget Jesus was a Jew.

Ron, I don"t think that Churches know what is going on. I go to Church and they seem to only be interested in their own little club and keeping it rolling, and that is not to say that they are not doing some wonderful work as they are, but... It appears to me that Churches are only luke warm now, and have done nothing to fight the flood of filth that has come into the world.. I believe that the effect of our rights and discrimination has made churches and Christians sink into apathy and silence, which was what it was designed to do..

the silence of the churches is very disappointing-more an act of betrayal.

Israel, I suspect, ias now taking a newer tack to improve public image but Hamas has just launched an Iranian missle that has landed in Israel proper and has also denied they are seeking long-term peace agreement...just perhaps the images will begin to shift somewhat.

The smaller the Jewish communities get in countries such as this means it is only a matter of time before actions against the community become mainstream. No one has dared to speak out for Israel. This is a message for all world wide communities. Stand up and speak up or be persecuted

I hope that I am wrong, but I am "afraid" this will be a pattern witnessed in many more countries and communities. This hatred of Israel has no logic behind it. The reason being, this is a spiritual battle, very evil forces are at work. I know this will sound overly religious to many, but there is no other answer. At the same time HaShem is deeply involved in all this [which will be confusing to some] but this should give those of us who trust in the God of Israel great comfort. Remember His ways are not our ways, and who can fathom His wisdom???

This is sickening. Not that I think it would help, but this should be brought to the attention of the Pope. Could you inform us which bodies ICJS will be contacting?

Amagine if this was done against Muslims or Mohammad/Allah. wow, we would have Muslims rioting and killing throughout the world, jsut as they did with the cartoons.

Lt. Colonel-Tropical Idi Amin Chavez is a documented psichopat ! He is refusing to have an MRA of his brain, which is abnormal, as was the brain of Hitler, Stalin, Mao and rest of them !

Daer Fran, Ronit and Ralph: Many thanks for sending me the letter defending the Venezuelan Jews. Chavez in coalition with Ahmedinejad of Iran is openly antisemitic and anti-jews ! Chavez is providing to Iran"s Hezzbullah and Hamas, Training Terrorist Camps in Venezuela: Sierra Perija and the Island of Margarita. I hope that we will be able to get rid of this antisemitic monster the Tropical Taliban Lt. Colonel Idi Amin Chavez !!! Best regards, Sigmund Mittler, M.D.

Venezuela has moved to the Left, and like American leftists, there is a hatred of Israel, which in some instances is really anti-semitism.