The death toll from Australia's worst ever recorded bushfires has reached 128, with more than 750 homes lost in the fires which swept through the southern state of Victoria.

Victoria's Country Fire Authority says it will focus on trying to contain fires over the next few days as conditions ease.

Several communities remain under threat from a 30,000 hectare fire is heading towards a number of towns in Victoria's north-east.

The Jewish community organisations here have begun mobilising for the enormous relief effort which needs to be undertaken. 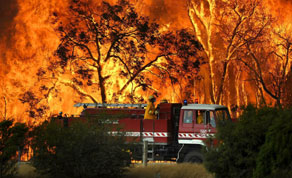 Below you will find details of phone numbers, times places, and things you can do to help.

Leibler Yavneh College has raised close to $1000 today for the Sheezel family, whose home was gutted. Yeshivah College raised money for Lanie Goldberger and family and they have already received a response from these brave survivors: "On behalf of my sister and our family, I would like to thank you all very much for your amazing generosity during this difficult time. We are both amazed and greatly humbled by the huge response of goods and household items that has been left at our door to help my sister and her family start the rebuilding process. At this point we have acquired sufficient amounts to get them off to a great start and, having also secured short term storage, will be sending everything to them as soon as their temporary accommodation is confirmed, which we hope to be in the next couple of weeks. Our focus has turned to raising the small amount required to secure their accommodation in the short term, after which we hope things can then return to semi normality until they can fully rebuild. Once again, we would like to publicly acknowledge the extraordinary kindness shown by this wonderful Jewish community, as has been shown by the Australian community at large. May we only need to get together like this in future for simchas. Wishing you all a Shabbat Shalom Lanie Goldberger and Family