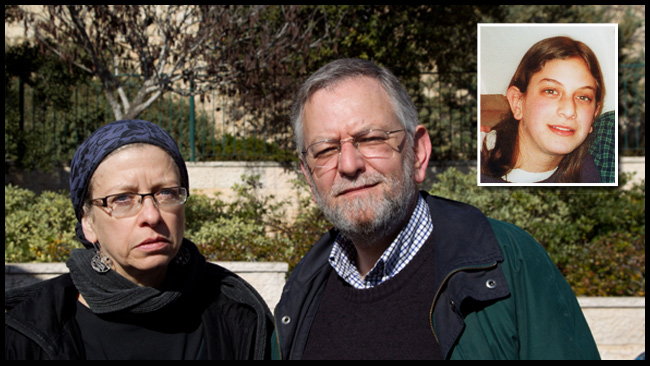 Frimet and Arnold Roth the parents of Melbourne-born Malki Roth (inset) who was just 15 years old when she died in a bomb blast at a Jerusalem pizza restaurant. Herald Sun

A MELBOURNE-BORN girl was killed by a suicide bomb more than a decade ago. Her death occupies her father's mind every day, compounded by the release of the orchestrator of the terrorism.

ARNOLD Roth's grief follows no guidebook. His daughter Malki was killed a decade ago.

Yet it might have been last week, so clear is his recall of the 12 hours after the bomb blast, when Malki's fate lay in official limbo, and Roth scrambled to a hospital on the mistaken tip that his daughter lay unidentified on an operating table.

Malki's life and death is the "central theme" of Roth's thinking. Each day, he sits in what was his daughter's bedroom, now his study, and runs a Jerusalem technology company.

Roth sometimes gazes at the political campaign stickers, all bright splashes and irony, his daughter used to paste on her bedroom walls. The stickers remind him of her sunny ways, as do the cheques he signs in her name, and the charity founded in her honour that helps families with disabled children.

Yet the jar of her absence will never fade. He remembers later retracing her final steps that day, her hurried farewell to her mother dozing in bed that morning, then the trail of text messages that placed Malki, inexorably, in a pizza restaurant where 15 people were killed for no good reason.

The wait for news went on and on. About 2am on August 10, 2001, Roth went numb at the confirmation of Malki's death. His daughter was 15 when she queued for lunch on a hot afternoon the day before. She had no enemies. She did not subscribe to hateful beliefs that might inspire them.

A young Arab man had sat down at a nearby table, gulped down his final meal, and detonated a guitar case of explosives.

His was the first major suicide bombing in a campaign against civilian targets in Israel. It changed everything; for the Roths, obviously, but also for everyone else, everywhere. Humanity was confronting a new blight, in this and 9/11 a few weeks later, that remains rampant a decade on.

This bombing wasn't about territory or rights. There was no victory sought, only terror to be wrought. Malki, born in Melbourne and raised in Jerusalem, was murdered, as a Jew, in the name of God, or Allah. She died for the sake of religion - gone wrong.

Roth's wife, Frimet, would weep in the streets. Roth, raised in Northcote and Elwood, would sit at a computer and write a letter to a Melbourne newspaper. He needed to send a message. He's been writing and talking about his loss ever since.

Headaches still accompany the "exquisite pain" he feels when he confronts his grief, such as when he addressed the United Nations in 2008. Of late, the headaches have become more frequent, as his family has braced for a course of events that defies common sense or precedent.

The "monster" who has long boasted about plotting the restaurant massacre was released from jail in October.

She accompanied the suicide bomber that day. She told him where to detonate his bomb. She was supposed to die in prison serving a sentence that stretched more than a millennium. Instead, as part of a contentious prisoner swap, she was released after a decade, one of about 1000 Palestinian prisoners exchanged for an Israeli solder, Gilad Schalit.

Roth avoids using Ahlam Tamimi's name. Yet he knows "this woman" plans to get married and have babies.

He also knows that his daughter's sweet countenance, that of a teenager who played the flute, an older sister to a disabled child, a student who hid tears in her final months at the growing number of shootings and deaths in Israel, still means nothing to her killer.

For here's the jag that defies all natural justice: not only has Tamimi been released from prison, to live freely in Jordan, she has been exalted as a hero who preaches a murderous faith on her own television show.

For Roth, it's akin to "Adolf Hitler surviving World War II, then being given his own chat show".

Tamimi was 20 when she orchestrated the massacre, then, in her role as a television journalist, returned to her studio to announce, with evident glee, that there had been a bombing.

Ten years in jail did not soften her fanaticism. She preaches death with a wide smile. Her cackling pitch is at odds with her soft features.

Yes, she beamed in a jailhouse interview, she helped kill children that day. Was it eight children, she was asked? She thought it was only three. No, why would she regret her actions?

A few years later, on her release, she said: "I would do it again today, and in the same manner."

Roth trembles each time he sees "this woman". He wants to throw the television against a wall. He doesn't, of course: rare is a voice more considered, not only on his own child's loss, but on a conflict so long and muddled that most observers long ago gave up on solutions.

Tamimi's name is set to his Google alert. He does not want vengeance. He is careful not to obsess. Yet he does seek justice.

"She really is a monster," Roth says. "There is such a thing as monsters. She's a human monster. She regales in the deaths of the children.

"She is genuinely animated by happiness in knowing that she killed the children. There is something cold and monstrous and manipulative and charismatic about this woman."

In recent weeks, Tamimi has claimed that Mossad, Israel's intelligence service, had planned to assassinate her. Roth thinks it is nonsense: listening to her extreme rhetoric, he says, he has detected an increasingly delusional tone.

Adulated since her release, she now seems to believe the adulation herself, he says. She is casting herself, somehow, as a lead victim to an audience of victims.

Naturally, Roth, a former Swanston St lawyer, is upset by the charade. He has heard talk of plans to capture Tamimi: Roth understands the sentiment, of course, but he places little stead in the chatter.

"She's not only a convicted perpetrator of a mass murder, she's also encouraging other people to do the same," he says.

"And there are laws, including international laws, which make incitement a crime. We are anxious to help the authorities in various countries find a way to prevent her from spreading this poisonous incitement."

ROTH was born into loss. Like so many Jews born after the Holocaust, his ancestry was largely erased in the diabolical ideology of the Third Reich.

His mother lost three brothers. His father, Abraham, one of 17 children, lost 15 siblings. Once, after digging his own grave in a work camp, Abraham Roth was shot and left for dead.

Arnold Roth's Melbourne upbringing was about trips to the MCG, where he saw Fred Trueman bowl the first ball of the 1962 Test. Roth still follows Melbourne footy matches on the internet - not that the club has offered him much light relief of late.

He was not raised as an orthodox Jew - this decision came later. He moved to Israel in 1988. The desire for "aliyah" grew out of the Six Day War, in 1967, when Israel's existence was perceived to be more threatened than at any other time.

Roth believes "painful compromise" is needed on both sides of the Israel-Palestine question. He also believes that no solution can be forthcoming as long as Palestinian authorities educate their children to "hate" Jews.

Yet politics drags him away from his grander point that terrorism is indiscriminate, that it is growing, and that no place on earth is immune.

Roth subscribes to traditional Jewish literature that frames good people in great pain and bad people with unjust rewards - not that he's suggesting that such philosophies begin to make sense of his loss.

There is little for that. There are many books, he says, on the death of your child, even some books on the murder of your child. Yet there are no books about the death of your child because of who she was and what she represented. Roth may well be a leading expert on such grave avenues of research. Among his best friends are the families of terrorism victims from Ireland and Spain's Basque country.

He sees he and and his wife as "canaries in the coalmine". They feel their perspective is overlooked in the broader analyses of terrorism's grip.

For comparisons, Roth harks back to early-day road campaigns in Melbourne. His message is aimed at those most at peril, but who are also oblivious to the dangers.

He likens terrorism to the Nazis. It's not about winning. It's about the urge to destroy. The challenge is to try to understand its motives.

Easy answers, such as dispossession and poverty, are not always present: Malki's suicide bomber, for example, left behind a prosperous family.

"We" are losing. Terrorists are winning. They are driven by a diseased religious viewpoint.

"They will blow up their own children as long as they can exact a price from the hated enemy," Roth says.

"They will send pregnant women into hospitals in order to blow them up without any regard for what this means on a moral level of human decency.

"There's a decline in the morality of the actors. And a very, very substantial escalation in the destructiveness of the tools that are available to people who think like that."

Still, Roth feels far from powerless. He gives his talks. He shares his grief. And he lives his life: besides his six remaining children, there are two grandchildren to coddle.

He also fights to have Ahlam Tamimi, the mass murderer who killed his daughter, returned to prison.

"We don't expect to change the world," he says. "We are constantly reinforced in our understanding of that.

"But there are things that passionate people outraged by this injustice can do. And that's what we do."