Haley to AIPAC: Our push to end UN anti-Israel bias is really a demand for peace

WASHINGTON — The Trump administration’s insistence on fair treatment for Israel at the UN is “actually a demand for peace,” the US Ambassador to the UN Nikki Haley told the AIPAC Policy Conference here on Monday evening, in a speech met with thunderous applause and frequent standing ovations.

The UN’s bias against Israel, she said, has “long undermined peace by encouraging an illusion that Israel will simply go away.” But Israel, she stressed, “is not going away. When the world recognizes that, then peace becomes possible” because all sides will then “be dealing with realities not fantasies” and “reasonable negotiated compromises can prevail over absolutist demands.”

Praising US President Donald Trump’s recognition of Jerusalem as Israel’s capital, she predicted that the day would come when the whole world would follow suit. And she said she intended to come to Jerusalem for the ceremony opening the US embassy there in May.

Haley’s address was by far the most enthusiastically received of any speech at the conference since it opened on Sunday morning. “You guys are amazing,” she said at the start, as the applause continued.

Twice she was interrupted by voices from the crowd declaring their love for her. Twice, she replied: “I love you too.” 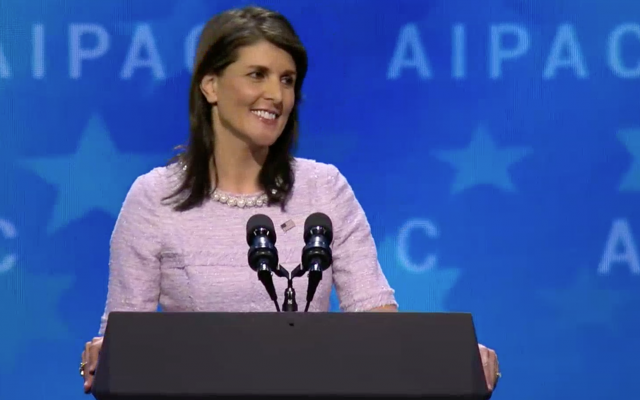 To thunderous applause, Haley promised early in her remarks that she would not allow the UN to bully Israel any longer.

“At the UN and throughout the UN agencies, Israel gets bullied,” the South Carolina native told the crowd of 18,000 gathered in the nation’s capital.  “I have absolutely no patience for bullying.”

She said she hadn’t solved the problem yet, but that the balance was starting to change.

She described a series of what she deemed transgressions against the Jewish state at the UN, including a UNESCO resolution that branded the biblical Tomb of the Patriarchs in Hebron as “a Palestinian heritage site in need of protection from Israel.

UNESCO was a UN agency with “one of the worst records of Israel bias.” But that resolution — an “outrageous” attempt “to change ancient history” — was, for the Trump administration, beyond the pale. “That was enough,” she said. “Ten months into this administration, the United States withdrew from UNESCO.”

Haley warmly praised Trump’s decision last December to recognize Jerusalem as Israel’s capital and to set in motion plans to move the US embassy there.

“This was not something that was created by the location of embassy,” she went on. “This is not something that was created by an American decision. America did not make Jerusalem Israel’s capital. What President Trump did, to his great credit, was recognize a reality that American presidents had denied for too long. Jerusalem is the capital of Israel. That’s a fact. And President Trump had the courage to recognize that fact when others would not.”

She added that, “Sometime in the future, the day will come when the whole world recognizes that fact.”

The envoy also said she intended to return to Israel in May, to be there when the US opens its embassy in the holy city.

“I hope to be there and join our great ambassador, David Friedman, on the day when we open our brand new American embassy in Jerusalem,” she said to whoops and cheers.

Haley singled out Guatemala for praise, for following the US lead on Jerusalem. “God bless Guatemala,” she declared. “They even joined us in moving their embassy to Jerusalem.”

Acknowledging dryly that Trump’s Jerusalem decision caused “a little bit of a stir” at the United Nations, Haley said the US would not forget the countries that voted for the subsequent General Assembly resolution condemning the Trump administration’s recognition of the holy city as Israel’s capital.

“We’re not forgetting that vote,” she said. “As I said at the time: On that vote, we were taking names.”

She said she had relished using the US veto to block the earlier UN Security Council vote rejecting Trump’s move — in contrast to the “shameful day for America” when the previous administration refused to veto December 2016’s Security Council Resolution 2334 condemning Israeli settlements.

She said the administration believed that UN votes should be a factor, though not the only factor, in determining US foreign aid. “We are determined to start making that connection,” she said.

In all that the US was doing, regarding Jerusalem, UNESCO, UNRWA et al., she elaborated, the US approach was led by the “simple concept that Israel must be treated like any other normal country.”

Thus, the US, she vowed, would continue to demand that Israel not be treatment as “some sort of temporary, provisional entity. Furthermore, “it cannot be the case that only one country in the world doesn’t get to choose it capital city.” Likewise, it was untenable that the Palestinian refugee population, uniquely, be counted in a way “that causes the number to grow forever.” Or that at the UN, an organization with 193 countries, “half of its time” is spent “attacking only one country. We will not accept it any longer,” she pledged.

A recurring theme of Haley’s speech was that “standing up for your friends is critical.” She vowed to always stand up for Israel.

And she promised, referring to PLO negotiator Saeb Erekat’s recent advice that she shut up, “Mr. Erekat, I will always be respectful, but I will never shut up.” For the umpteenth time, the crowd roared its approval.